The word ‘cake’ has become part of the French language, and its meaning has evolved over the past couple of decades. When I lived in Paris in the 1970s, in France « un cake » — pronounced [KEHK] — was a kind of fruitcake, but with much less fruit in it than the classic — notorious — American fruitcake.

That's what the Robert dictionary says about the word cake in French: it's a « Gâteau garni de raisins secs et de fruits confits. » — “a cake containing raisins and candied fruit.” The generic French word for the generic English word ‘cake’ is of course « gâteau ». 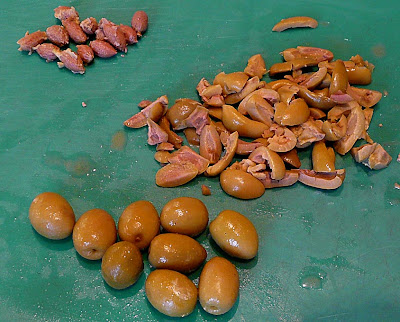 Want some chopped olives in your cake?
Now the term « cake » has taken on a new meaning in France. It's any cake cooked in a « moule à cake », which is not a ‘cake pan’ but a ‘loaf pan’ in English. In France the cake can be a sweet cake or a savory (salty) cake — « un cake salé ». A traditional example comes from the Auvergne region — here's a link to the recipe for the cake called Pounti, made with ham, cheese, Swiss chard, and prunes.

What's funny is that in American English we would calls such savory cakes ‘breads’ — zucchini bread, pumpkin bread, cheese bread, or tomato bread, for example. Or a loaf. My mother's first cookbook includes at least 15 recipes for breads like these, and they are usually baked in a loaf pan. Some have sugar in them, and some don't (or not much). 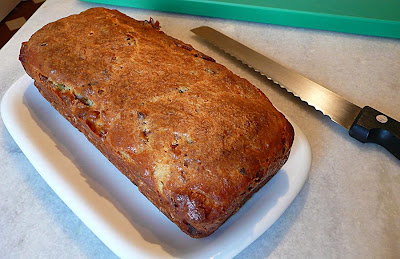 This is a savory cake.
The first couple of summers we spent in Saint-Aignan, Walt started making what we in the U.S. call zucchini bread for our neighbors. We were growing zukes. The bread was a big hit, and people served it as a before-dinner treat with apéritifs — before-dinner drinks, which are a tradition in France. To adapt the zucchini bread — un cake aux courgettes — for the preferences of the French palate, Walt put in half as much sugar (or less) than the American recipe called for.

Actually, the apéritif tradition in France has evolved too. Nowadays people often make the apéritifs into a light dinner. There's an expression for it: « un apéritif dînatoire » — a meal consisting of a good quantity of finger foods and either wine or whatever other drinks anyone prefers. It's much more informally served that a real dîner, but it can last over the course of an entire evening the way a French dinner can. I guess we would call it a cocktail party. 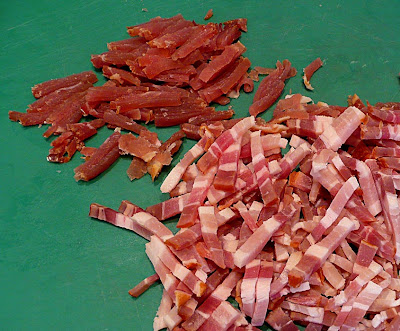 Two cured meats: the bacon is red and the lard is streaky.
A couple of weeks ago, some neighbors invited us over to their house for apéritifs for the first time. D. and A. have owned the old farmhouse two doors down from us since the 1970s, but they have only recently retired and moved from the Paris area to Saint-Aignan more or less permanently (they kept their Paris apartment). We were interested to see their house, which they have completely restored themselves over the years.

As finger food to go with our drinks, A. had make what she called « un cake au lard ». Now if you think that's a cake made with lard, think again. « Lard » is the French word for what we call ‘bacon’ — at least American bacon, also known as ‘streaky bacon,’ which is different from ‘back bacon.’ 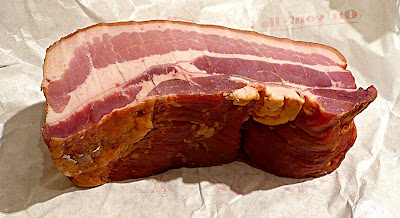 This is called « lard fumé » or « poitrine fumée » in French.
I bought it at Chez Doudouille's Saint-Aignan market stand.
You see how complicated all this gets? French and English really are two « langues ennemies » — ‘enemy languages’ — because they use so many of the same words but with entirely (or just slightly) different meanings.

« Le lard », then, is bacon. It's not exactly like American bacon, because it's not cured with sugar. It can be salt-cured or smoked. Or it can be bought fresh. It's what we call ‘pork belly’ — or, better, « poitrine », which means ‘breast’ in French. A piece of smoked (pork) breast — un morceau de poitrine fumée — is a slab of smoked bacon.

As I said yesterday, « le bacon » in French in not the same thing at all. It's back bacon, not belly bacon. So why is our U.S. lard (saindoux in French) called lard? That's a question for another day. 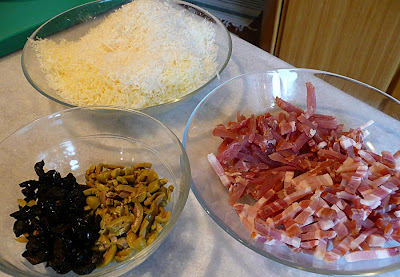 The flavoring ingredients for the recipe below.
Okay, all that was just an introduction to my real topic, which is savory cakes, and in this case a ‘bacon cake.’ Here is the recipe. Instead of bacon cake, let's call it a:

Combine flour and baking powder in a bowl. With a spatula, mix in eggs one at a time, and then yogurt, milk, and melted butter. Incorporate the grated cheese and spices into the batter.

Fold in the chopped olives and the bacon. Pour the batter into the buttered loaf pan and bake for 40 minutes.

Cool the cake on a rack for 10 minutes before taking it out of the pan. 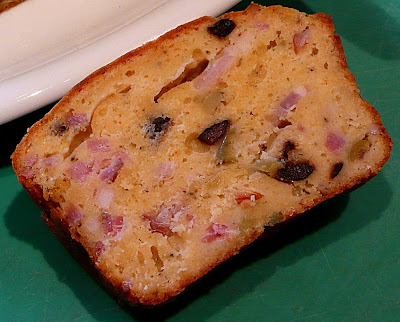 One thing about this cake that surprised me is that you put
the bacon in without cooking it first. It cooks inside the cake.
Serve slices just slightly warm, or cut the cake up into bite-size cubes and serve as finger food with wine.

The olives are optional, by the way. You could replace them with prunes or other dried fruit for a different flavor. Or with sun-dried tomatoes.
Posted by Ken Broadhurst at 07:11