Have lunch, then wait and see

« Il fait un drôle de temps, » the neighbor told me yesterday. “The weather is strange right now. One minute it feels warm, and the next minute it feels cold. And the wind won't stop blowing!”

He's right. Walt and I ended up building a fire in the wood stove yesterday afternoon — it was that chilly in the house, with the wind and clouds. I was glad to see the neighbor out walking his dog, though. He's 80 and just had a hip replacement operation at the beginning of April. His recovery has been speedy. He and his wife were here for the weekend for the first time in a while. 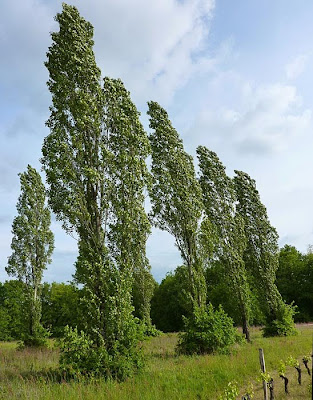 Wind through the poplars around the vineyard
Walt and I had grilled asparagus — Walt cooked them on our little electric grill — for lunch yesterday. It wasn't exactly cooking-out weather, but we wanted to grill the bunch of white asparagus we bought at the market in Selles-sur-Cher last Thursday. Grilling white asparagus, rather than the green kind, was an experiment. I thought it was delicious but W. thought green asparagus would have been better — more tender and succulent. We can't even find green asparagus in this part of the Loire Valley (or very rarely). 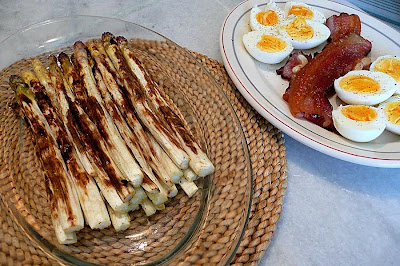 Grilled white asparagus, hard-boiled eggs,
and thick-sliced bacon for lunch
I cooked hard-boiled eggs and blanched and then fried two thick slices of poitrine fumée in olive oil. Grilled asparagus with œufs durs was an idea I found on the Internet while looking for ways to combine asparagus and eggs. I think it was on an Italian site. And it was a good idea. We dressed the asparagus at the table with a good Italian olive oil. 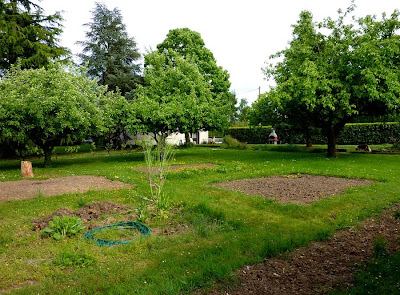 The garden just waits.
Besides cooking, eating, and watching tennis on TV (Nadal beat Federer in Madrid), we waited. Waited for the moment to come when we can go set out plants — tomatoes, eggplants, cayenne peppers, marigolds — in the garden. It's still a little chilly to put them out now. Waited for rain, but none came. Waited for warm weather. Waited for Monday and the continuation of the attic work. 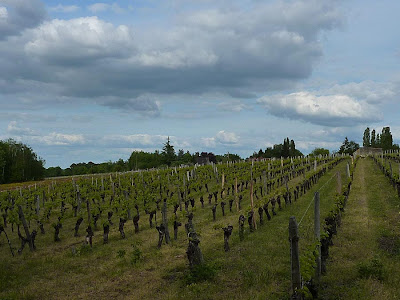 Mediocre weather for May. Our house is
in the very middle of this shot.
I did go out and weed the potato patch. And we finished removing the last bits of an old tree stump that has been a scar on the lawn since 2003. It only took us 6½ years to finally obliterate what remained of a sickly linden tree that was there when we bought the house and that we had cut down. It felt good to accomplish something that had been nagging at us for so long. 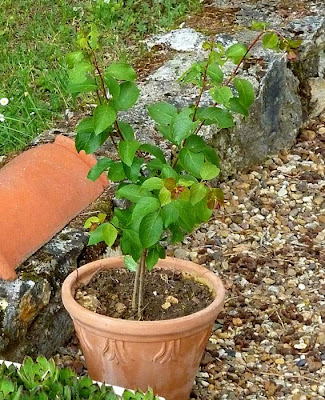 The third plum tree, ready to be planted
in the ground when the time comes
And I dug out and potted up another plum tree, which will eventually replace the ones that blew over on February 28. This one was growing on our property, so I didn't have to feel sneaky about it. It didn't droop at all after I transplanted it. Either it's very hardy, or the cool weather helped it make the transition smoothly. I planted a little aucuba (a.k.a. Gold Dust Plant or Spotted Laurel) cutting that CHM gave me last year. I put it in the back yard, up against the garden shed where it will get plenty of sun and warmth (one day). 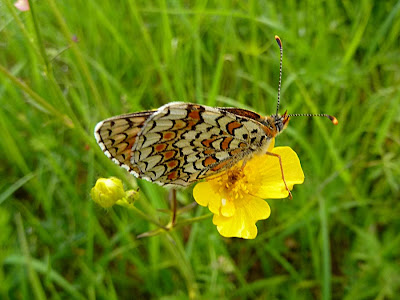 My butterfly came back to see me.
Today I'm off to the doctor for my semi-annual checkup. And I have to stop at the Gamm Vert garden center to get some grass seed to put down where the old tree stump was. The work crew should be here in a few minutes to finish some plumbing, electrical, and plasterboard work upstairs. There will be banging and sawing. 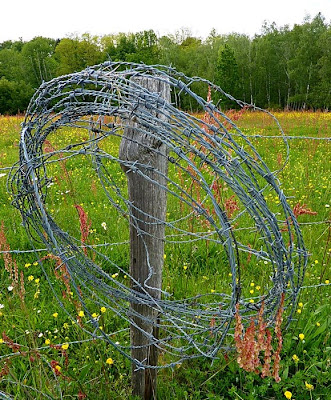 Somebody is getting ready to string up some new
barbed wire around the donkey pen out back.
I guess it was good to have quiet for several days, over the long weekend. Making even little bits of progress in the garden is a good thing. When do you think summer will finally burst upon us?
Posted by Ken Broadhurst at 07:32