I learned a new word. First, I learned it in French. I was looking up strawberries to see if I could find information about a new variety we bought the other day at the market in Selles-sur-Cher from the man we often by asparagus and strawberries from in the spring.

No, remontant is not a place name. That would be Romorantin.

Up to now, the world of strawberries has been divided into four categories in my mind. There are Spanish strawberries; the ones called Gariguettes; others called Mara des Bois; and of course there are fraises des bois — wild strawberries. « Bois » means "woods" and wild strawberries are the ones you find growing in the woods and on roadsides. 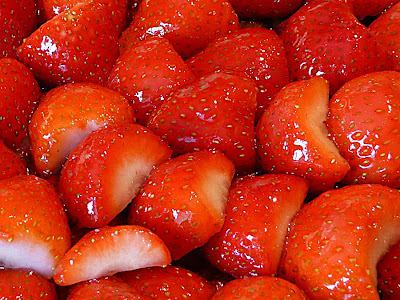 Second, Gariguettes. A variety developed in Provence and now grown elsewhere in France, including the Sologne region in the Loire Valley. Positive points: juicy, tasty, and delicate. Negative points: fragile — eat them right after you buy them — and available only briefly in the spring. More expensive than Spanish strawberries, but worth the price. The Gariguette strawberry is not a remontant variety.

Fourth, Fraises des Bois. Positives: can be unbelievably sweet. Free when you can find them. Negatives: hard to find, ans with tiny berries — it would take hundreds or even thousands of them to make a pie. 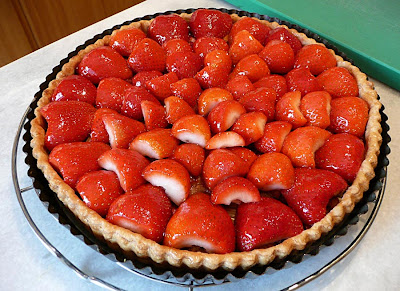 Walt made a pie with a layer of rhubarb compote
on the bottom and a layer of fresh Charlotte
'berries on top, glazed with quince jelly.
Okay, my strawberry world has been pretty limited, considering that I just read on the Internet that there are more than 600 varieties of strawberries in existence. By the way, California strawberries are the same as Spanish strawberries. They'll do in a pinch but don't expect your taste buds to do a tango when you eat them.

So what is this remontant term all about? Well, it's a French word that meant "coming back up, re-mounting." For example, in talking about drinks, « un petit remontant » is a little "pick-me-up" or a tonic.

When applied to strawberry and raspberry plants, remontant means a variety that flowers and produces fruit from spring all the way through to autumn and the first frosts. Remontant strawberries are also called "ever-bearing"or "perpetual." 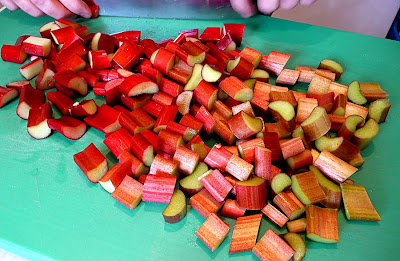 Rhubarb from the back yard patch
A non-remontant variety, like the Gariguette, will flower just once in the spring and that's it. So Gariguettes, which are maybe the best strawberries I've ever tasted, are available only for a few weeks in the spring. And they don't travel well.

At the Selles-sur-Cher market the other day, the new variety of strawberries we discovered is called the Charlotte. Here's what I read about it on a web site:

And that describes what we bought from the vendor at Selles. I hope he will be selling them all summer — he said they are grown locally by his son. We paid four euros for 500 grams of them — that would be about U.S. $4.50/lb. Walt made them into a strawberry-rhubarb tart, using rhubarb from our patch out in the garden and a home-made butter crust.

By the way, have you seen how far the euro has plunged in value against the U.S. dollar? Right now, one euro is worth $1.25. That's 80 eurocents for your dollar, compared to about 65 eurocents a few months ago. If you're coming to France this year, you will enjoy that extra buying power.
Posted by Ken Broadhurst at 07:49