Yesterday Walt went to the market in Saint-Aignan. He came back with a bunch of white asparagus, of course, and two trays of local strawberries. In addition, he went to see our favorite charcutière and picked up some boudin antillais — Caribbean-style blood sausage — as well as some good smoked sausages we can have with our springtime collard greens.

By the way, did you know that the origin of the terms charcutier and charcuterie is the expression « chair cuite »? « Chair » means "flesh" or "meat" and « cuite » means "cooked" — the « chair-cuitier » specialized in cooked meats, including pâtés, terrines, and sausages. A charcuterie is a French-style delicatessen.

That was an aside. 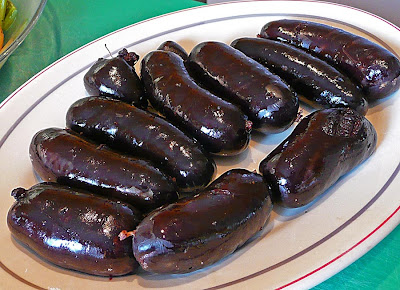 Boudin antillais, a spicy Caribbean version of blood sausage
I've looked at a lot of recipes for boudin noir — known as "blood sausage" or "black pudding" in England — and boudin antillais, the version made in places including Martinique and Guadeloupe — the Antilles. The sausage is basically a mixture of bread crumbs, onion or garlic, spices, herbs, and pork blood stuffed into casings and poached until it's cooked through. Here's a recipe in French.

Whether or not that sounds appetizing, let me say that it is delicious when it is correctly prepared. Walt cooked the boudins slowly on our new electric grill, out on the front deck. They just need to be heated through, since they are cooked when you buy them. You can cook them slowly in a pan with a little oil, poach them in simmering water, grill them, or even heat them in the microwave. They're good as a first or main course.

To go with the spicy blood sausage, we had some Italian flat beans. This seems to be their season. Flat beans are also called Romano beans, I read. I don't remember how easy they were to find when we lived in California, but they are plentiful here in the markets in late spring and early summer.

You "top and tail" the beans and then cut them into one-inch pieces before steaming them or cooking them in boiling water for about 10 minutes. They have a good firm texture and a nice sweet beany taste when they are just done. You can season them any way you would season regular haricots verts. 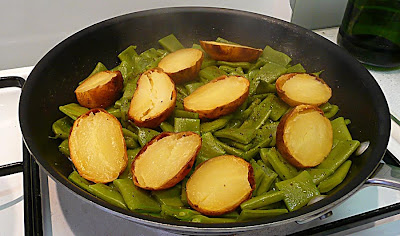 Italian flat beans with oven-roasted potatoes
We wanted to eat them basically plain to go with the spicy sausages, so I just tossed them in some melted butter with salt and pepper. I had some oven-roasted new potatoes left over from the day before, so I cut them in half and heated them up on top of the beans.

The boudins antillais were very spicy, with a good kick. I'm sure they had a lot of cayenne pepper in them, along with cinammon, cloves, and maybe nutmeg. The spiciness makes the Antilles version of blood sausage less gamy and more appealing than the plain French version of boudin noir. Try it if you can find some.
Posted by Ken Broadhurst at 07:31