Local goat cheeses from the farm-inn

I've blogged about the local goat cheeses in the past, but I can never say enough about how good they are. The Loire Valley and the areas just south of it are goat-cheese country. The land here is too valuable to be given over the cow pasture and cattle-raising, because this is the Jardin de la France — the Garden of France — where so many vegetables, fruits, and grains are grown.

Among the fruits are, of course, grapes. That means wines. And what goes with wines? Cheeses. Raising and grazing goats doesn't take nearly as much land as raising and grazing cows. So we get goat cheeses in different styles, made in different geographical zones: Valençay or Pouligny-St-Pierre pyramids, little Selles-sur-Cher rounds, Ste-Maure-de-Touraine logs, and even Betz-le-Château squares. 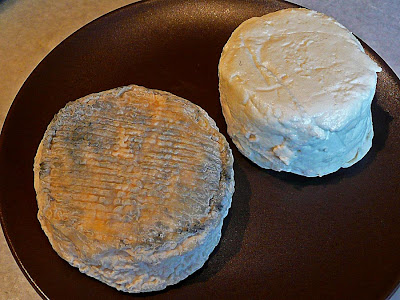 An ash-covered demi-sec goat cheese and a plain, fresh crottin
from the Ferme-Auberge « La Lionnière » in Mareuil-sur-Cher
The cheeses I buy most of the time come from a farm about a mile southwest of our house. It's run as a ferme-auberge by a couple named Françoise et Frédéric Bouland — a ferme-auberge is a “farm-inn” where tourists can rent a room or even a little cottage and, during their stay, take their meals in the farmhouse dining room. The owner's commit themselves to preparing meals using only the vegetables, fruits, cheeses, and meats they produce on the farm. 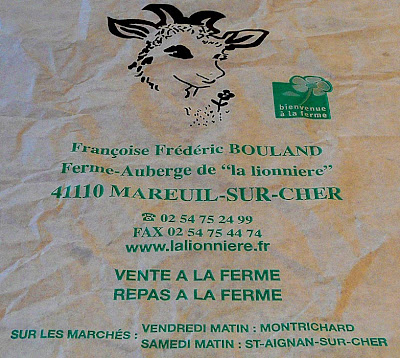 The Boulands' farm is a couple of kilometers from our house.
You can go there, pet the goats, and buy the cheeses.
Well, at least 80% of the ingredients must come from the farm. The Boulands' dining room is not exactly a restaurant, though we who live nearby, or even people just passing through, can reserve a table even if they are not staying in one of the rooms at the inn. The food will always include goat cheeses in several forms, and the meat dishes are often goat or kid too — I'm not kidding, ha ha ha. 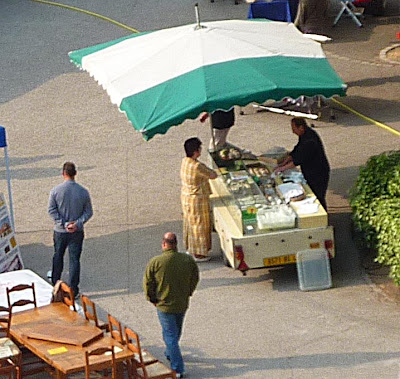 Here's Frédéric Bouland selling cheese from his little stand
at the Saint-Aignan market last Saturday.
Usually there will be only one main course at dinner, sometimes there are two to choose from, and if it's not goat in a stew or braise, it might be lamb, chicken, or guinea fowl. The Boulands also grow vegetables that end up on their table, and they have a lot of fruit trees. They serve wines produced in the village where they operate. The last time we went there for dinner, as our main course we had goat in a mustard sauce that was memorable. We also enjoyed a very good apricot charlotte for dessert.

The Boulands also sell goat cheeses at the farm, and they set up a stand at two nearby markets — the ones in Montrichard on Fridays and in Saint-Aignan on Saturdays. Saint-Aignan is where I bought the cheeses in these pictures. The ferme-auberge cheeses are not A.O.C. like the Selles-sur-Cher goat cheeses produced just east of Saint-Aignan but they are every bit as good. The Boulands run a very small, high-quality operation. 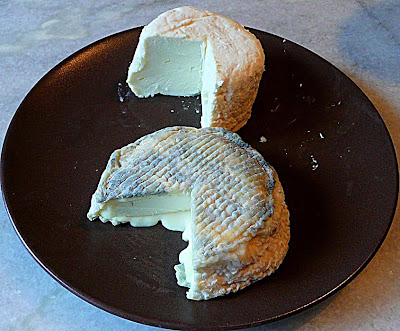 The same Bouland cheeses — the riper one is starting to run.
Yesterday, by the way, we went to the market in Selles-sur-Cher, which is 15 km upriver from our house. We wanted asparagus and strawberries, as well as some flowers to put in our window boxes. The market in Selles is one of the biggest markets around, rivaling the markets in bigger towns like Amboise, Loches, and Romorantin.

Well, yesterday, the Selles market was far too crowded. And that was true despite the mediocre weather we are having these days. Yesterday was the Ascension holiday, so a lot of people had the day off from work. Hundreds and hundreds of them drove, maybe miles the way we did, to shop at the market in Selles. There were old people, children, and young people pushing baby carriages and strollers through the crowds. For us, it was a little much. We found what we were looking for and then cut the excursion short and drove back home to cook lunch.
Posted by Ken Broadhurst at 07:52