Today is May 13 and it's Ascension Day, which always falls on a Thursday. There's no mail, and many businesses will be closed. The exceptions are food shops and outdoor markets, which will be open until about noon.

Many people take Friday off as well, doing what they call "making the bridge" — ils font le pont — to extend the Thursday holiday and make this into a four-day weekend. More and more often in France, you hear people talking about having un long weekend. That's what the guys working on our attic conversion are doing, so we too have four days off. 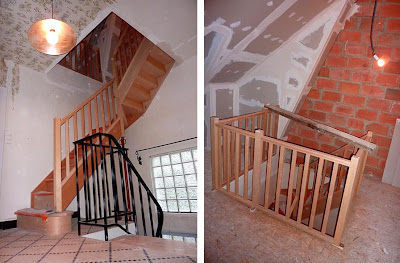 The top edges of the stairwell are finished now, and
the chimneys are boxed in with plasterboard.
The weather is still chilly and gray, so we'll have to stay inside most of the time. We won't miss all the noise of hammering and sawing upstairs. Yesterday we had Coco here continuing to do plasterboard (a.k.a. sheetrock) work, and a couple of guys doing electrical and heating work as well.

The good news is that the electricity is now on upstairs. All that really means is that we have a light bulb that works, hanging from a wire sticking out of the ceiling over the new staircase. And the 16 electrical outlets we had put in around the room are live now, not to mention the switches for the overhead light. 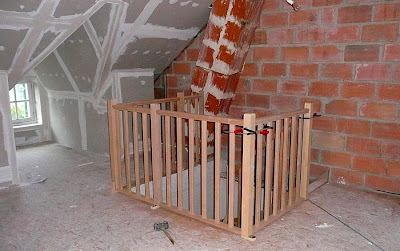 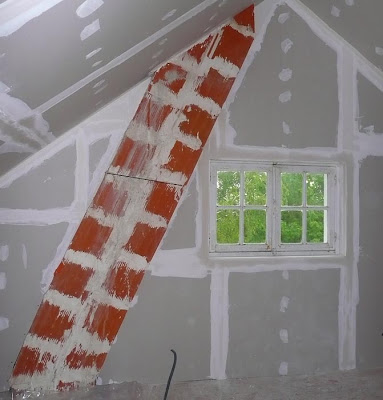 The chimneys on either end of the attic as they were before
Coco has now boxed in the two chimneys that run diagonally up the outer walls of the attic space. Boxed them in with placoplâtre (wallboard), that is. Placoplâtre, like Sheetrock, is a brand name that has come to be used as a generic term, like kleenex in both English and French, or frigidaire (which is less used now than it used to be).

Anyway, the stairwell is mostly finished now and it is soon going to seem as if it has always looked the way it looks now. I guess that means Coco is doing a good job. 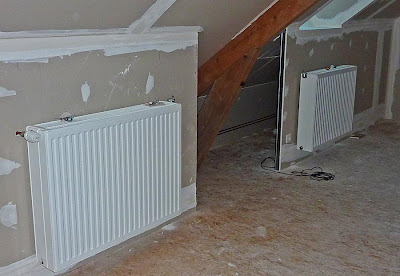 Radiators! We could use them right now if they were
hooked up, considering the cold weather we're having.
Oh, the radiators are up too, but they aren't yet connected to the boiler. As Coco and the crew worked yesterday afternoon, Bertie the cat joined them in a supervisory role. He and they seemed to enjoy the collaboration.

Problem was, when the crew left, Bertie was nowhere to be found. After a minute or two of looking, we realized all the downstairs doors were closed, so he couldn't be outside. He was hiding somewhere in the attic. 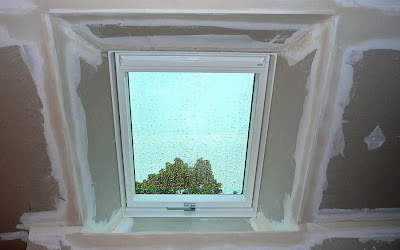 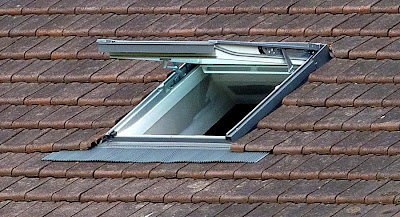 Rain on a Velux window (top), and the window
open as seen from outdoors (bottom)
At 6:00 a friend stopped by for a glass of wine and a few pieces of that cake au lard, olives, et fromage I made day before yesterday. She didn't stay very long. When she left, we went downstairs with her and Callie the collie followed us. Before we realized what was happening, Callie was off like a shot and headed back up the stairs.

From down below, we heard her scrambling up the new wooden stairs, squealing and yapping. That could mean only one thing: Bertie had made an appearance, and Callie was chasing him. I ran up the two flights of stairs to the attic, and Callie was inside one of the storage closets up against the eaves of the house, barking and growling. 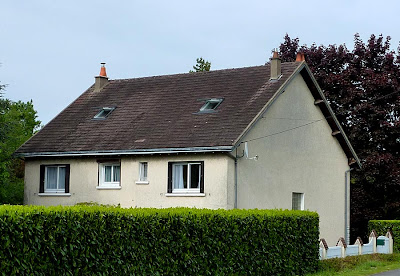 The back of the house from the road,
with the roof windows open
I got the dog out of the closet, and Walt came up with a flashlight — it's dark in those little spaces
— to see if the cat was crouching in a corner. No sign of her. Then we realized the closet isn't sealed off, and Bertie was inside the walls, between the insulation and the roof tiles somewhere. It took a little while to coax him out, but finally he came.

We have to talk to Coco about sealing the ends and backs of those closets so the cat won't get trapped inside the walls. 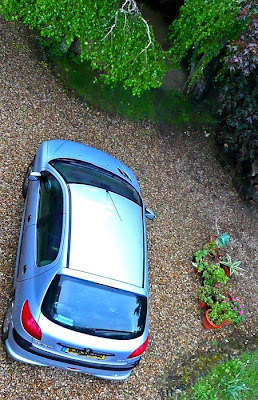 View of the driveway/courtyard from the front attic window

We are off to the big market in Selles-sur-Cher this morning to buy petunias and maybe geraniums for our front window boxes. We'll have to bundle up, but at least it's not raining... for the moment.
Posted by Ken Broadhurst at 06:45