Yesterday some people who live in Hawaii came by for a visit. They've been staying for a few days in a gîte rural — a vacation rental — about 10 miles from Saint-Aignan. In fact, they said this is at least the fourth time over the past decade that they've rented that same house and come to spend time in the Loire Valley.

Ann and Paul are people I met on an Internet forum focused on travel in France. They had seen this blog, because my posts on the forum include a link to it. We warned them that our house is under construction, but they understood because they've had major construction done at their house in years past.

That's the nice thing about having a good Internet connection and this blog. We meet a lot of people, and we've always had very good experiences. As you read this, you may realize that you are among the people we've met and enjoyed getting to know since 2005, thanks to our blogs. 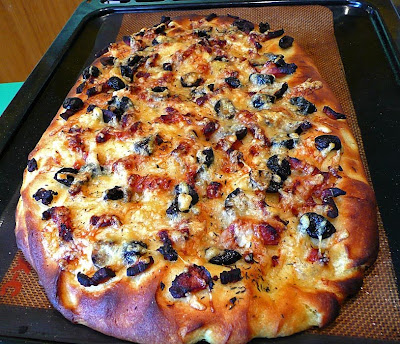 Fougasse — foccacia bread
In honor of the visit, I made what is called in French a fougasse. In Italian, that's a foccacia. I was going to go up to the boulangerie in the vineyards and buy a fougasse, but I realized I had all the ingredients, so I thought I'd try to make one myself. Walt, who knows how to make dough for pizzas and pies, was here to advise me.

It turned out to be easy to do, and was delicious. You make a yeast dough with olive oil in it, as you would make pizza crust. It's easy if you have a heavy-duty stand mixer, which will do the mixing and blending for you. Or a bread machine. I found the recipe on... the Internet, of course. 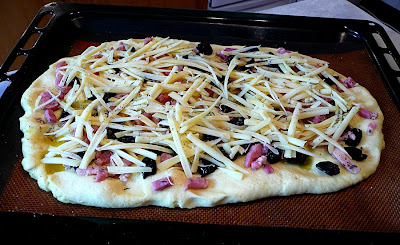 Toppings (optional)
lardons (smoked bacon or ham)
pitted black olives
chopped sun-dried tomatoes
In a small blowl, mix the yeast and a pinch of sugar together with 3 Tbsp. of lukewarm water. Set it aside for 15 minutes in a warm place.

Put the flour and salt in the bowl of the mixer and add the olive oil. Using the dough hook attachment, start mixing it together slowly and add the yeasty water. Add more lukewarm water, a tablespoon or two at a time, as the mixer does its work, until the dough forms a ball. Continue mixing at fairly slow speed for 5 or 6 minutes, to knead the dough until is is smooth and elastic.

Put the ball of dough in a mixing bowl with a tablespoon or two of olive oil in the bottom. Turn the dough over so that it's oiled on all side. Cover the bowl with plastic wrap and set it in a warm place for two hours to let it rise.

When the dough has finished rising (and it doesn't have to rise very much), take it out of the bowl and stretch it into shape on an oiled baking sheet or a silicon pad. It should be fairly thin — fougasse is a flat bread. Sprinkle the cooked bacon and pitted olives over all and press them down slightly to embed them in the dough. Set the dough aside, loosely covered, to rise again for 30 to 45 minutes.

Finally, drizzle some olive oil over all, sprinkle on some salt and pepper if you want, and put on the grated cheese. Bake the fougasse in a 400ºF/200ºC oven for 20 to 30 minutes, until it's as brown as you want it and the cheese is all melted.

Cut the bread into little squares and serve it just warm. It's good finger food.