...but it sure doesn't feel like it. The temperature this morning is cooler than chilly. We've had fires in the wood stove for three days running. Yesterday morning, we turned the boiler on to warm up the radiators. 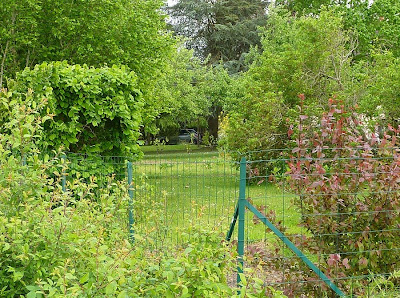 A view of our yard in springtime — the car is under the carport
out front, and that's a plum tree with red leaves on the right.
We haven't had much rain, but it's been pretty cloudy and gray. And windy. In fact, the two plum trees out on the edge of the vineyard — the ones that blew down in February and were pulled back up by tractor — have blown down again. Those men wasted their time pulling and propping the fallen trees back up. I guess we made the right decision when we decided to let our trees lie where they fell. 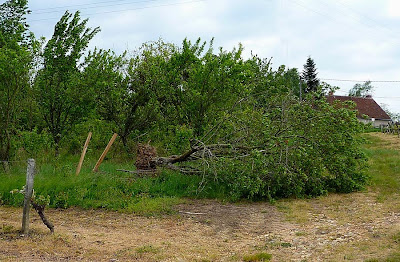 The plum trees were blown over again by this week's winds,
which are ‘visible’ in the photo, if you know what I mean.
Yesterday the work crew didn't show up to do anything up in the attic. Nobody called to say why. If they don't show up today, we'll have to call Jacques the big boss and see what's going on. The work is so close to being finished that we don't want to to be delayed now. The only big job left to do is to lay down the pine floor. 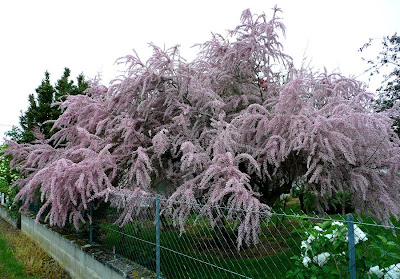 A neighbor's beautiful tamarisk tree
One reason it was a pain that the crew didn't come yesterday was that we wanted to drive over to Romorantin, which is about 30 miles from Saint-Aignan, but one of us needed to stay here during work hours. So I drove over there by myself. Walt stayed with the dog and was ready to greet Coco and his helpers. 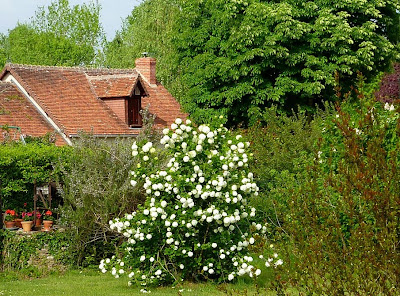 Another neighbor's house in the hamlet
We had friends over again ysterday evening. Our social schedule got busy again all of a sudden. K & J, who came by for apéritifs and finger food, are Americans who have bought a house just 5 or 6 miles from Saint-Aignan. They are getting ready to move permanently to France. We compared notes about contractors, the kind of work that needs doing, and the best places to buy building materials, appliances, and ... wine! 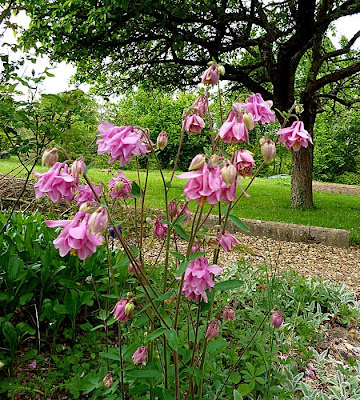 Columbine in bloom in our back garden
As you can see from the pictures in this post, it does look like spring at La Renaudière. I just wish it felt like it.
Posted by Ken Broadhurst at 07:42