The other day we went over to the neighbors' and picked up 3 kg of little wild red plums that had fallen out of a tree in their yard. The ground was dry and the plums hadn't yet been attacked by insects. Our neighbors had told us to go get some of them; they had picked 15 kg/33 lbs. (!) for themselves and their extended family.

Walt made a tart out of about a third of the plums we picked, but we were left with nearly 5 lbs. of them. I had the idea to make plum sauce, which is spicy and sweet and goes with grilled pork, duck, or chicken. It makes a good dipping sauce for what we call « nems » in France — a.k.a. egg rolls, or fresh or fried Vietnamese-style spring rolls. 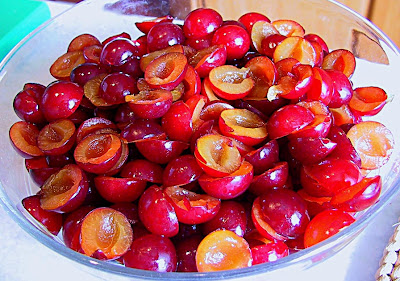 Plums pitted for a pie

Here's how you make the plum sauce. Put the plums, whole, in a thick-bottomed pot and add water so that they are just barely covered. Turn on the heat and let the plums and water come to a low boil. The skins will split and fall off the plums, which will start to cook down. Let them cook at a low simmer for 20 to 30 minutes. 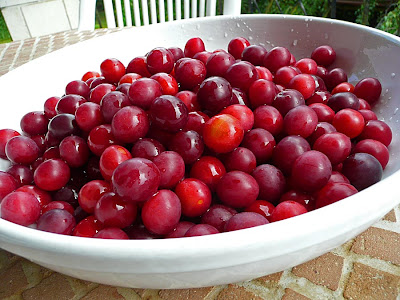 Wild red plums by the kilogram

Pour the cooked plums into a colander and press them down with the back of a big spoon to remove as much juice as possible. I tried putting them in a clean kitchen towel and squeezing the juice out of them that way, but it didn't work very well. That method has worked great in the past for extracting the juice from grapes cooked the same way. I ended up using a French « chinois » — a conical wire strainer with a big wooden pestle — to extract the juice and some of the plum pulp, leaving the skins and pits behind. 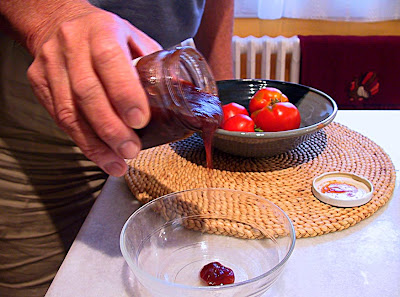 Here you can see the consistency.

Put the juice — there must have been a quart of it — back in the pot and season it. I wanted a sweet sauce, and these were very tart plums, so I added about a cup of sugar. The amount of sugar is up to you. I also added about half a cup of cider vinegar for acidity and a good teaspoon of dried red pepper flakes for heat. And I put in two tablespoons of finely diced ginger root and a teaspoon of salt, with pinches of black pepper and allspice (poivre de la Jamaïque). Soy sauce would have been good in place of the salt, but I didn't think of it. I also didn't use any garlic or onion— next time I will. 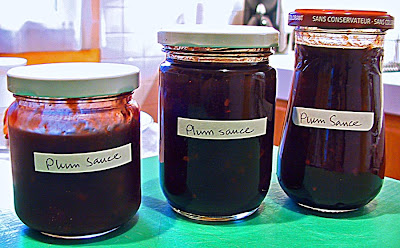 The jar on the left is the one we opened
when we had grilled pork chops for lunch.

I let that mixture of plum juice and seasonings cook down for 30 to 45 minutes on medium low heat. It just boiled slowly. When it seemed thick enough, I put it in sterilized jars and sealed them. As you can see, I didn't get a big quantity — just three small jars — but then again you don't eat much of it at a sitting. It will last until next year, I'm sure. 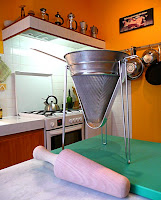 Here's a link to the recipe that I based my procedure on. Merci beaucoup to SusanV.
Posted by Ken Broadhurst at 07:29