We are still harvesting chard (a.k.a. silverbeet), and now we're starting to get beans too. Thanks to Carolyn, who comments here and has visited, we have some very nice pole beans growing tall in the garden and now producing profusely. We also have wax beans, which are a bush variety, and they are producing too. We have some lima bean plants, too, and we are hoping for at least a small crop. We don't get lima beans in France otherwise. 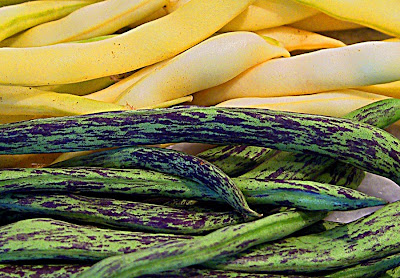 Pole beans and wax beans
I gave our American friend H. some Swiss chard last week. She and her husband have a house about 10 miles south of Saint-Aignan, and they are here for the summer. Actually, H. and I went out to the garden together and cut the leaves. A., her husband, is like me — he loves greens. 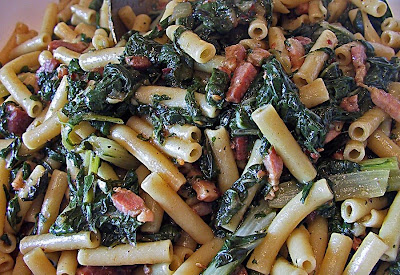 A day or two ago H. said she had cooked the greens with onions and lardons — those are the little chunks of smoked or salted pork you buy here in France and use to season vegetables, stews, or egg dishes. Think bacon cut into chunks rather than thin slices. Anyway, she said she cooked the chard with lardons and onions and then combined it with cooked pasta into a kind of stir-fry. 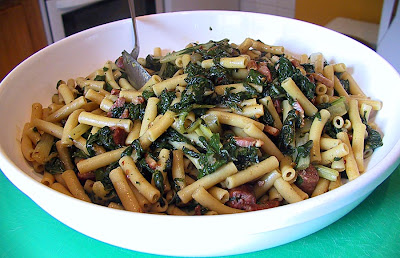 Swiss chard stir-fry with pasta, smoked pork, and sausages
We decided to do the same thing, and it was excellent. I think that's obvious from the pictures. We cooked the chard first in water with salt. Then we cooked the pasta, re-using the chard water to give it flavor. Finally, we cooked the lardons and onions together, along with some garlic.

We also added a couple of little sausages, cooked and then cut into short sections. And we put in some hot red pepper flakes and black pepper to spice it up. Then we combined it all in a wok and stirred it around for the flavors to blend, adding in a little more of the chard cooking liquid (known as "pot liquor" in the U.S. south). 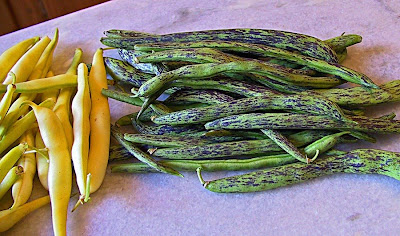 A mix of pole beans and wax beans will be our lunch today. The pole beans are pretty, all spotted and striped with a reddish-purple color. I'll be interested to see if they cook up all green. Carolyn, as I said, send us the seeds for the pole beans, along with seeds for several varieties of heirloom tomatoes. The tomatoes are also doing great. What a pleasure it is to have the pole beans and the unusual tomatoes. 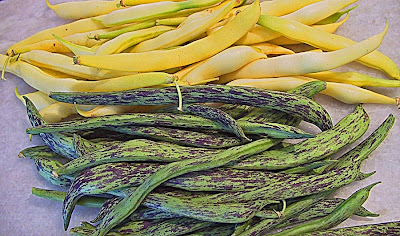 Other news from the garden: Walt pointed out to me this morning that one of our eggplants is producing white fruit rather than the more common purple variety. I'm sure eggplant is called by that name because the white varieties do look like eggs. I'll be glad to see them again.

When I was growing up, we had white eggplants but not purple ones, if I remember correctly. I think the white ones lost out because they bruise easily and don't look as pretty on display. Only once in a while do you see white aubergines (the British and French term) in markets in France or in the U.S.
Posted by Ken Broadhurst at 08:15