A stroll in the country

Wow, we're having a cloudy, damp morning. It has actually started raining now, for the first time in a while. It looks like a slightly damp week coming up. The garden will be happy to get some moisture — if we actually get any significant precipitation.

Yesterday we went over to an English friend's house to watch the Wimbledon final. She gets BBC TV by satellite. It turned out to be a marathon match between Roddick and Federer that lasted well into the evening. Walt and I both wanted Federer to win, but I couldn't help regretting that Roddick suffered such a defeat after playing so well and coming so close. 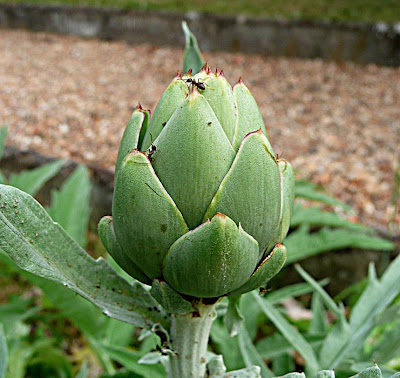 Ants and aphids on a new artichoke in the garden. We don't plan
to eat this artichoke, so we'll just let the bugs enjoy living on it.
It will turn into a nice flower in a few days or weeks.
Instead of driving the car over to our friend's house, we decided to walk. It's not much more than a mile from our house. We had to climb through an electrified wire fence (the current didn't seem to be on) to get to a path that runs down through some woods. Then the path went in a straight line along the edges of fields and woods, through a little hamlet of old farm houses. I noticed that one house had a covered swimming pool. 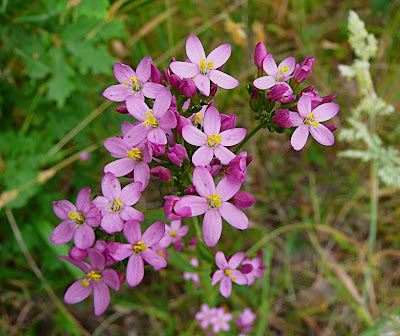 These little pink flowers (maybe ½" across) are
appearing all around the vineyard now.
Callie enjoyed the walk, of course. It was a surprise treat for her. She hates the car anyway. We figured we'd enjoy the walk too, and we did. The weather was nice. During the tennis match, a brief, light rain shower passed over, and for a minute we thought we might not be able to walk back home. But the rain passed on off, and the walk back at 8:00 p.m. was as pleasant as the walk over had been. 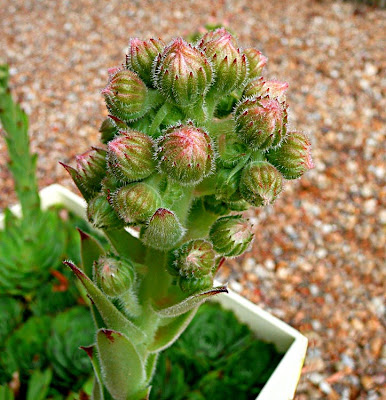 These Sempervivum plants, a.k.a. "hens and chicks"
or "house leeks," have sent up big flower stalks now.
We live in a beautiful area of fields, woods, and vines. The landscape is not spectacular, but it's pretty and gentle. The river valley is wide and flat, with higher land on its north and south sides. On the walk yesterday afternoon, we noticed that it was warmer down in the valley than up on our hill, where there was more of a breeze. 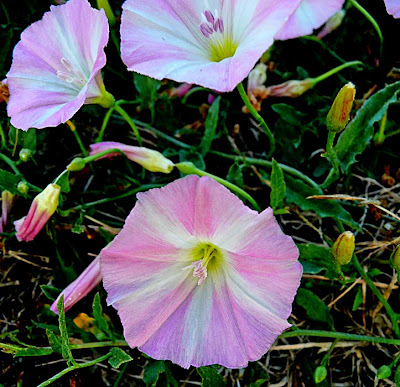 Here's another flower that is blooming everywhere
around the vineyard right now. It's a kind of
morning glory called a liseron in French.
The old fortress pictured below is not in our immediate area, but over near the town called Saint-Amand-Montrond, about 100 miles upriver from us. CHM and I stopped to have a look at it in June when we were out driving around. We didn't have time to go in, so we just took a couple of pictures through the front gate. This is one of them. 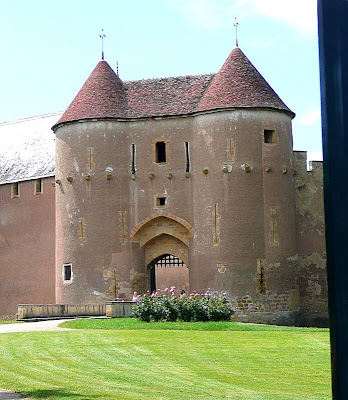 The Château d'Ainay-le-Vieil
According to what I've read, the fortress was built in the late 1200s. And Wikipedia in French says Saint-Amand-Montrond and Ainay-le-Vieil are not actually in the Berry, but on the northern edge of the Bourbonnais region. It's right on the border between these two old provinces, which is not very precisely defined.
Posted by Ken Broadhurst at 07:54