Yesterday on Mother Earth News I read an article by Patricia Lanza about the "lasagna" method of preparing a vegetable garden. We are going to adopt some of Lanza's practices. She lays down layers of newspaper, peat moss, grass clippings, and "chipped" leaves on her garden plots in the fall and composting happens sur place over the winter. She says she can plant her garden in the spring without needing to till the soil first. 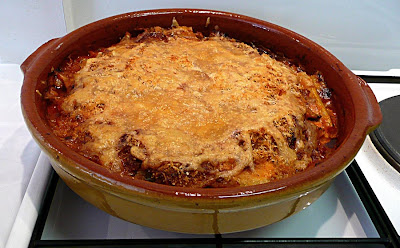 A gratin using Swiss chard ribs — côtes de blettes in French
There are two things in Lanza's scheme that we don't have at our disposal, however: newspapers and peat moss. We don't buy newspapers any more. And I'm not sure where I would find peat moss here, or how expensive it would be. Leaves and grass clippings we have, in abundance. We were already planning to put leaves over our garden plots this fall as a way to keep weeds down over the winter and early spring. But I'll till them into the soil in spring, as long as I can still handle the rotary cultivator.

Lanza's article is interesting and worth a read if you garden at all. (Thanks, Nadège.) 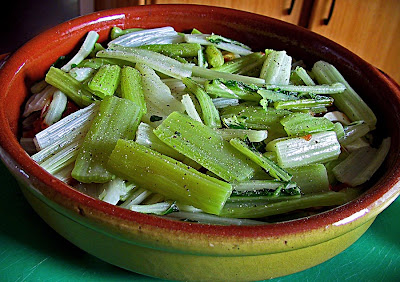 Layer tomato sauce, chard ribs, and grated cheese in a
baking dish. The chard ribs look like celery stalks.
It's still hot here and there are still big thunderstorms with heavy rain, hail, and strong winds along the Atlantic Coast of France, 100 miles west of here. We are expecting the rain to move through Saint-Aignan tonight and tomorrow. The garden needs rain right now. Maybe I'll be able to get out and do some more weeding over the weekend. Temperatures are supposed to moderate. 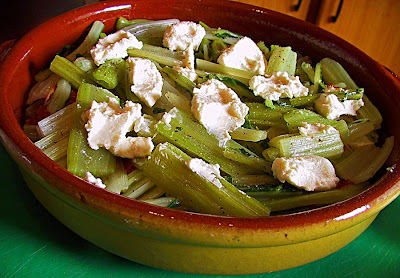 Spoon some ricotta cheese over the top layer.
This week we made a gratin of Swiss chard ribs with tomato sauce and grated cheese. It's really good. What you do is cut the wide flat central ribs out of a batch of big chard leaves and (optionally) de-string them the way you would remove the strings from stalks of celery. Cut the ribs into 2-inch pieces and cook them in boiling water for 10 minutes, until they are tender. 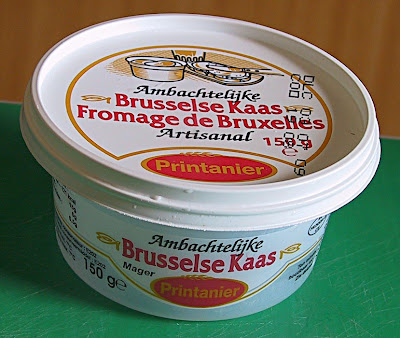 Instead of Italian ricotta, I used this "Brussels Cheese" that
Martine brought us from Belgium last month. Delicious.
Save the green parts of the chard leaves and cook them as you would fresh spinach. You can add them to the gratin if you want to by cooking them, chopping them, and mixing them into the tomato sauce. Or you can freeze them, cooked, for later use. Put more tomato sauce on top...
Layer the chard ribs loosely in a baking dish, adding some tomato sauce and grated cheese as you go. Bread crumbs are a good addition in small quantities. On top put a layer of grated cheese and bake the dish in a hot oven until the sauce is bubbling and the cheese on top is golden brown. 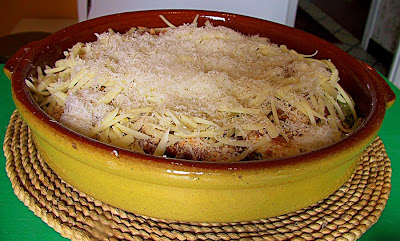 ... and then cover it all with grated cheeses —
Swiss cheese and parmesan are good.
You end up with something that resembles a lasagna but contains chard ribs instead of pasta. And that makes me think that cooked pasta would be a good addition to this gratin.
Posted by Ken Broadhurst at 07:04