I'm a person who doesn't believe in throwing food out. It just pains me to waste anything. This summer season is killing me. So much fruit is going to waste. It's not even being picked. It's too much for even the birds and deer to eat.

I've been watching a bunch of blackthorn bushes — small trees, really — ever since spring. Now they are full of fruit. They produce little dark-purple berries called sloes in English and prunelles (little plums) in French. I've read about sloes on line and I've seen pictures that seem to confirm that these really are sloes. 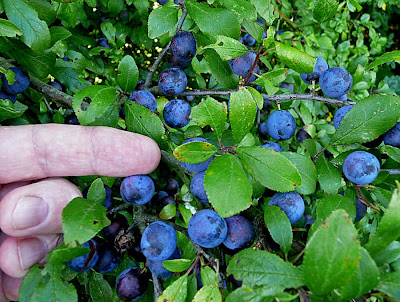 Ripening sloes (with my finger for scale)
I want to pick some but they are still as hard as a rock. There's a site devoted to them called sloebiz.com — it's mostly about making sloe gin, which doesn't tempt me. There and on other web pages I've read things like this about sloes:

In August, the fruits are well formed but partially hidden by the dense leaves all around. Note the characteristic 'bloom' on the sloes. Avoid the temptation to pick in August as these notoriously bitter little berries need as much time as possible to fully ripen (hence the folklore about picking 'after the first frosts').

I've found several references to making jelly out of sloes, but I need to wait until October or even November to pick some. That's all I need... more jelly. 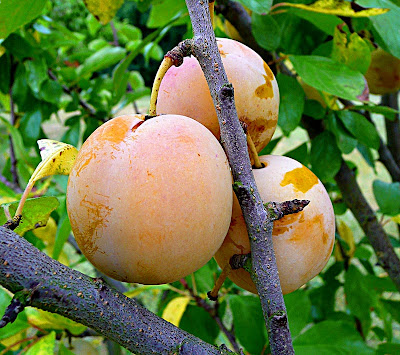 Fat yellow plums in the neighbors' yard
Meanwhile, there is crop after crop of bigger plums. I just looked to see why it is we call them "plums" rather than "prunes" as in French. Well, plum comes from old English plumus, which in turn derives from the Latin prunus. So it's the same word. It's just another example of linguistic corruption and confusion. 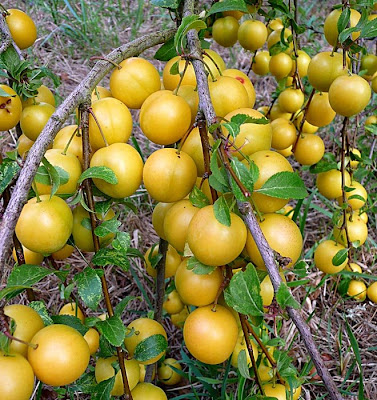 Branches bend under the weight of little yellow plums.
Our neighbors have four plum trees right next to each other on their property. One has green plums, one red, one purple, and one yellow. And then in a vacant lot just down the road there is a tree that is now covered with more little yellow plums than you could imagine. The branches are so weighed down that they are touching the ground. They aren't quite ripe yet. 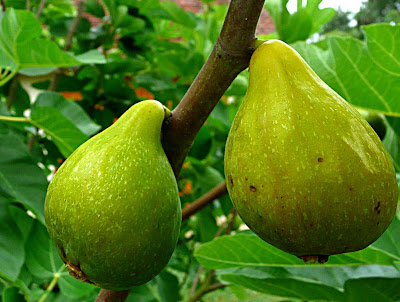 Ripe green figs
Meanwhile, our neighbors — we're watching their yard while they are away for a week — also have a huge fig tree that has hundreds of ripe figs on it. 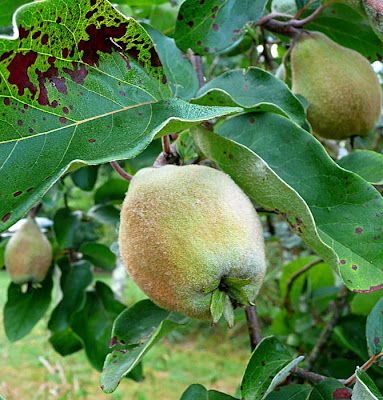 Fuzzy quinces
And our other neighbors have a quince tree that blew over in a wind storm a couple of years ago. It hasn't died; it's just lying on its side. This morning I noticed that it is not only covered in healthy-looking green leaves, but also in quinces. They're like pears but have a kind of peach fuzz on them. They make great jelly. But then so will all these millions of apples we have in the back yard...