In early September we'll be going to spend a few days' vacation down in the Auvergne region, a four or five hour drive south of the Loire Valley. We're going with three other friends, and taking the dog with us. The challenge has been to find a rental house, un gîte rural, that would be big enough to accommodate us, located in an interesting area, and available to people traveling with pets.

I found one, and it wasn't that hard. The organization called Gîtes de France has a web site that a lot of people say isn't the easiest to negotiate. One problem is that it's pretty much all in French. If you can deal with that, you'll do okay. There's a national site for Gîtes de France, and there are regional sites. The regional sites are sometimes easier to use.

Anyway, here's the gîte I found: it's big — 145 square meters, or 1560 sq. ft. — and it has two bathrooms and two WCs. There are three bedrooms, two with double beds and one with twin beds. There's a living room, a dining room, and a full kitchen. 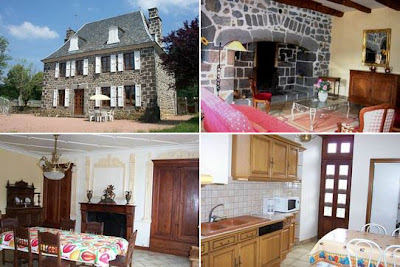 Some photos of the gîte rural we have rented in Auvergne
In case you are wondering, the French word gîte is used to describe a short-term vacation rental out in the country. Gîte [zheet] means "shelter" or "a place to sleep" and an animal's gîte — a fox's or a hare's, for instance — is what we would call its den in English.

Unfortunately, we can only go down there for three nights, and for Walt and me that's pushing it. We have the vegetable garden to worry about. If it rains a time or two over the four days we'll be away, everything will be fine. If it's hot and dry, well... we'll just water everything thoroughly before we leave and hope for the best.

Most gîtes are rented by the week. That's the case with this one. We are going to pay for the whole week, but only spend three nights there. Some gîtes are rented out for weekends, but we won't be there over a weekend, since we'll arrive on a Tuesday and leave on Friday morning.

Still, the whole-week rental price won't break the bank. It's only 360 euros for seven nights with up to 6 people. So for the five of us, that will come to less than 75 euros per person, or 25 euros per night for our three-night stay. That's pretty affordable. Only in France...

Heat costs extra, but there's a big fireplace and firewood is supplied for free. We hope we won't need heat, but a fire in the evening might be nice. Here's a list of some of the house's other features:
We'll take our own bed and bath linens with us, and we'll see if we really need to pay for cleaning. We'll probably be able to do it ourselves after such a short stay. We'll also take a couple of coolers, basic groceries, and some wine. 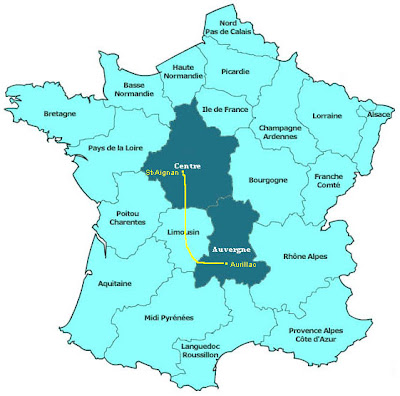 Map of France showing our approximate route from Saint-Aignan
down to Aurillac. Map shows the French regions and their names.
The house is in a tiny village that is 7 km/4 mi. from a slightly larger village (pop. 1200) with shops, and 13 km/8 mi. from the medieval village called Salers (pop. 368). Salers is one of "The Most Beautiful Villages of France" — here's a link to the page about Salers on the Les Plus Beaux Villages de France web site. Salers also famous for a cheese and a breed of beef cattle that go by the same name.

We'll about 30 km/18 mi. from the largish town of Aurillac (pop. 30,000). All this is in the French département called Le Cantal, which is also famous for a cheese also called Cantal. It's a mountainous region, and a lot of the mountains are actually part of a chain of extinct volcanoes. We'll be right on the edge of a national park.
Posted by Ken Broadhurst at 08:09