About the last place where CHM and I stopped back in June on our drive around the Berry region was a little town called Neuvy. Actually, the full name of the town is Neuvy-Saint-Sépulchre. That's a mouthful. And to make it even more complicated, the last word of the name has an idiosyncratic spelling.

The "Saint-Sépulchre" part of Neuvy's name refers to a church. Part of the existing church in Neuvy, which is dedicated to Saint Stephen (St Etienne), was built in the middle years of the 11th century. Another part was built 100 years later. That "newer" part of the church is a round building featuring an impressive rotunda modeled on the Holy Sepulchre, which is Christ's tomb and is to be found in the walled Old City of Jerusalem. 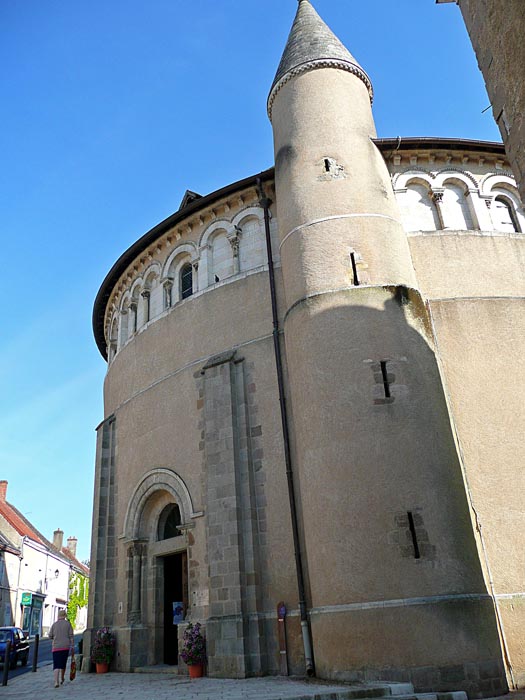 Part of the Eglise St-Etienne in Neuvy is a structure
modeled on the Holy Sepulchre in Jerusalem.
The French people — they were Berrichon people, of the Berry, really, since France as we know it didn't exist back then — who built the church in Neuvy had recently come back from a "pilgrimage" to the Holy Land. I think "pilgrimage" is a euphemism for the term "crusade" — they hadn't gone to Jerusalem as simple worshipers or tourists, but as conquerors and Defenders of the Faith. Theirs had been a military mission — the first great Crusade took place starting in 1095. 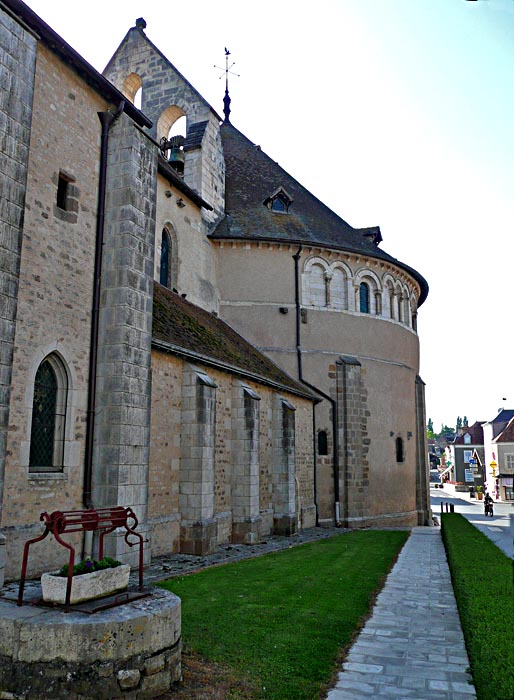 The unusual church in Neuvy
When they came back to Neuvy, these anonymous crusaders decided to build a church in their town that would be a replica of Christ's tomb in Jerusalem. They had the support and aid of a bishop named Eudes from the town of Déols, a few miles north next to the bigger town called Châteauroux. Bishop Eudes also had recently done the pilgrimage. They tore down a big part of the church that had stood in Neuvy since 1049 and in its place built the rotunda that still stands today. 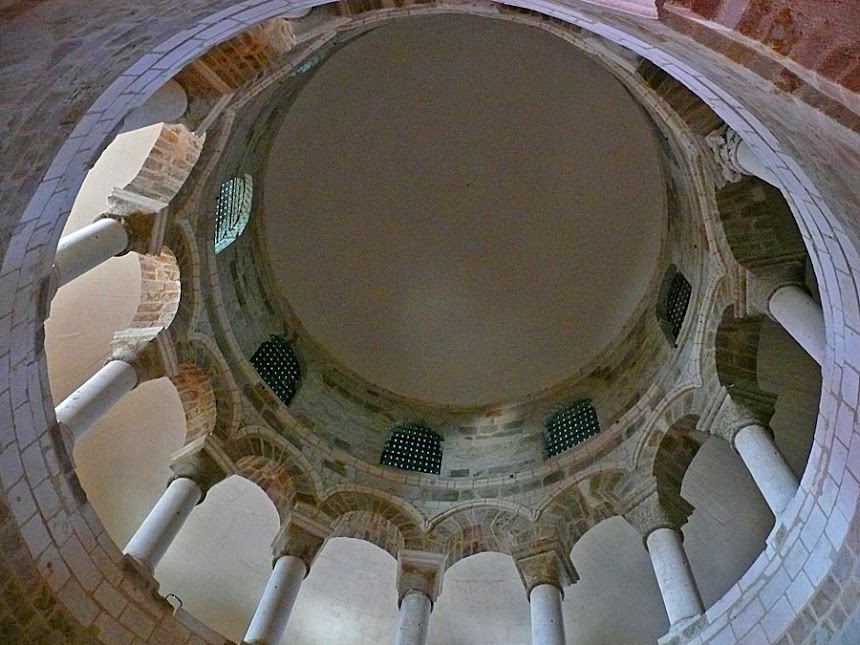 The ceiling of the rotunda was restored by Viollet-le-Duc in
the 1800s. Thanks to CHM for the photo; mine came out blurry.
Later, they found out from other returning "pilgrims" that a rectangular addition had been built onto the Holy Sepulchre in Jerusalem. So they decided to leave standing the part of the older Neuvy church that remained next to their rotunda, in order to keep the whole complex authentic. 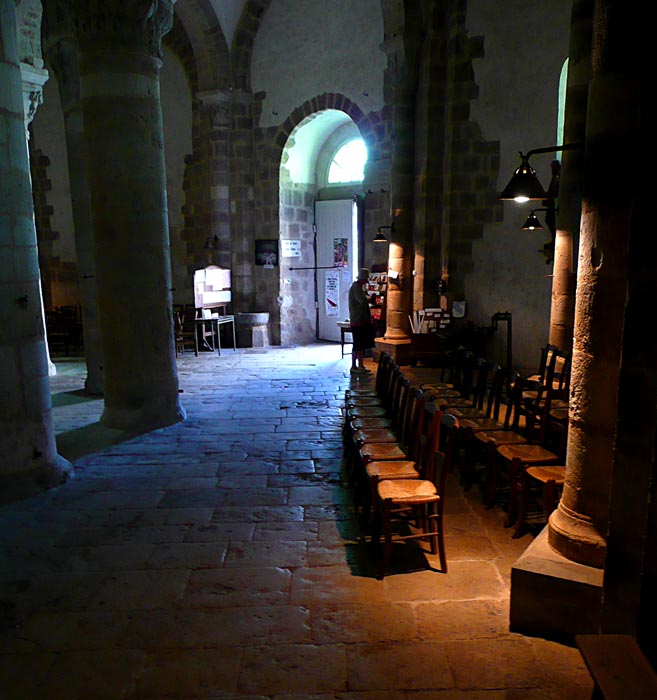 Inside the rotunda of the Neuvy church
They set about re-attaching the once-condemned rectangular church section to the newer round section, which had originally been planned to completely replace the older church. The result is a round building with a rectangular building stuck onto it. It's not harmonious, but it is interesting. 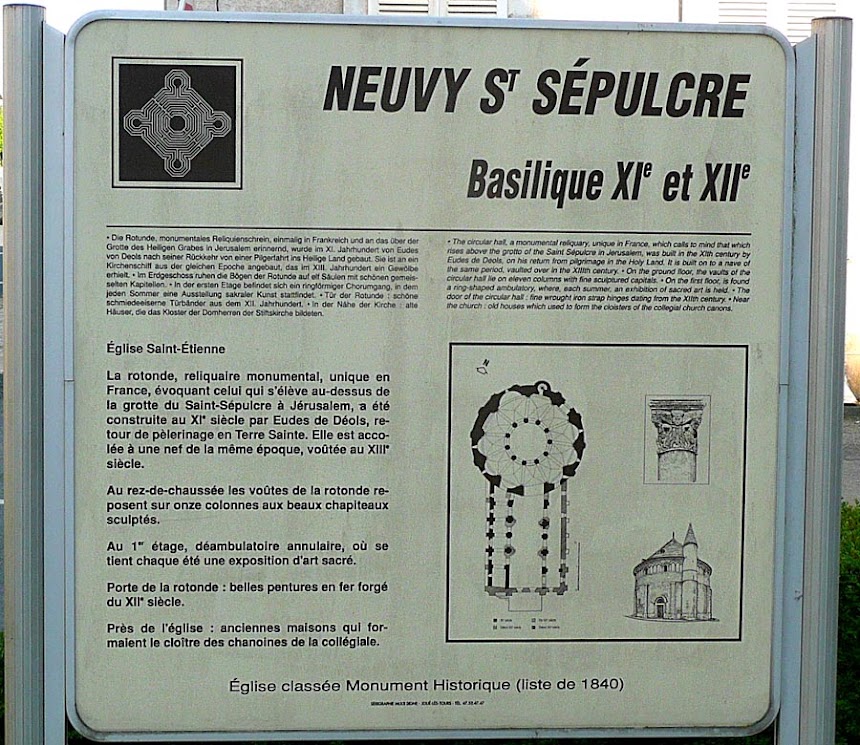 Even the people who designed the Monument Historique
sign by the church in Neuvy spelled the name wrong.
"Sepulchre" is, by the way, a chiefly British spelling of the word we write as "sepulcher" in American English. It's « sépulcre » in modern French, but « sépulchre » in Neuvy-Saint-Sépulchre. The Michelin guide spells the name of the Jerusalem church as Saint-Sépulcre. It's enough to make your head spin.

Sorry this is all so convoluted. Just look at the pictures if the text is too confusing.
Posted by Ken Broadhurst at 08:41