Or, une tarte aux prunes. All these little red plums are ripening on trees around the hamlet. On some trees, larger plums are still green and hard, but on others these little ones are red, sweet, and juicy. I planted a tree in our yard last year. I started it from the pits of little red plums I picked up in the neighbors' yard in 2007. 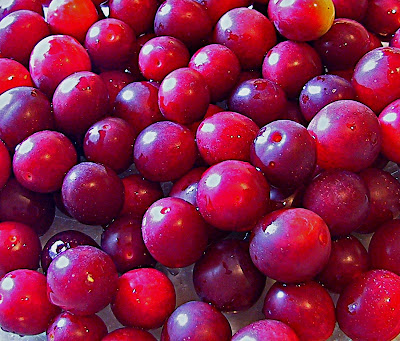 Little red plums the size of cherries
Yesterday I found two more trees. Nobody ever picks the fruit. One is in our next-door neighbor's yard and some of the branches hang over on our side of the fence. The other is in a vacant lot down the road. Nobody ever tends that lot, except once a year in July when somebody comes and mows down the tall grass. That mowing was done last week. 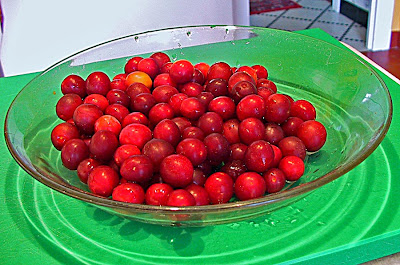 I know of at least four trees in the hamlet that are
loaded down with these plums right now.
Walking through there yesterday morning with the dog, I saw a big tree with branches hanging heavy with little red plums. They're ripe. These are plums that are not much bigger than cherries. They have sweet yellow pulp under the dark red skin. 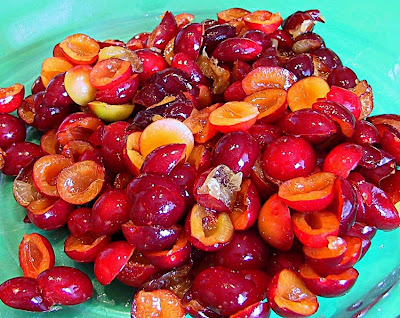 Pitting them takes time.
I promised I wouldn't make any more jam or preserves. I still have a couple of quarts of plum preserves that I made in 2007, which was a banner year for stone fruit. This year is nearly as good.

What else can you do with ripe plums? Bake a pie, of course. First, pick some plums. Then blind-bake a pâte brisée crust — that's the standard pie crust. It's better if it's made with butter, of course, rather than some other fat. Put a sheet of foil in it and weigh it down with dried beans, pebbles, or ceramic pie weights. When the crust is lightly browned and fully set, take it out of the oven, lift out the foil and weights, and let it cool slightly. 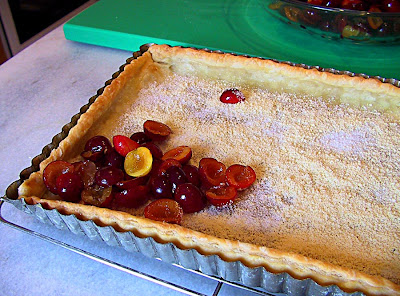 Arrange them however you want over some sugar
and almond powder in a half-baked crust.
Meanwhile, pit the plums. That's tedious work with tiny plums, but it's worth it. Helping pit them was my main contribution to the pie effort, along with picking the plums in the first place. And taking the pictures. 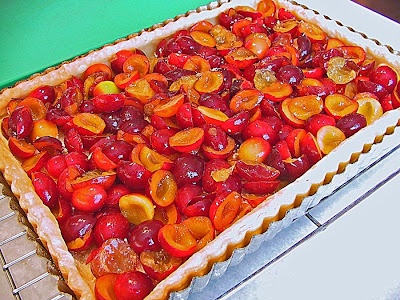 Sprinkle some sugar and lemon juice over the plums
before putting the tart in the oven.
Arrange the pitted plum halves over the sugar and almond powder. Arrange them as carefully as you want, or not carefully at all. Just spread them out into an even layer. Sprinkle them with a little lemon juice to accentuate the flavor, and sprinkle a tablespoon or two of sugar over them. 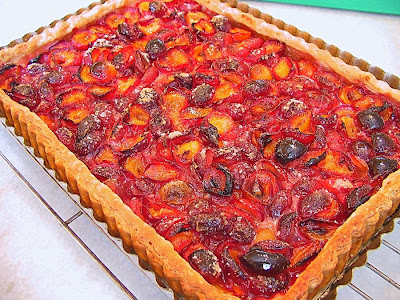 This would be really good with a scoop of vanilla ice cream.
Bake the pie for 15 or 20 minutes in a moderately hot oven so that the sugar on top will caramelize. The plums will start to brown or even blacken slightly. They will be sweet, tart, and kind of syrupy. It will be good.
Posted by Ken Broadhurst at 08:26