Flashes of lightning and balls of fire

We have Internet service this morning. That's comforting. The France Télécom « expert » did not call yesterday between 6:00 and 7:00 p.m. as had been promised. I guess there was no need to call since everything was working normally again.

Before 6:00 p.m. I took Callie on her walk out into the vineyard. I went out to see if I could find any evidence of a lightning strike out there. I couldn't. Everything looked perfectly normal — no big burned spot on the ground anywhere that I could find, no trees broken or scorched. Maybe I imagined the whole thing. But I don't think so. 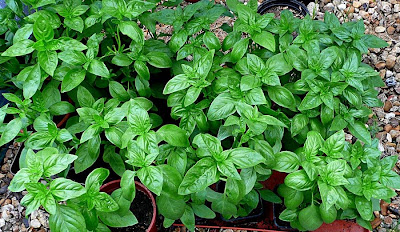 Walt's basil garden in the mini-serre
I ran into Roland, who does gardening work for two of our neighbors. He was out piling up some grass trimmings and cut branches for, I imagine, burning later. I told him my story about the lightning bolt. He said sometimes you can get the impression that a lightning strike was much closer than it really was. He said that the sharp bolt and nearly simultaneous thunder I saw had happened just before 1:00 a.m. — he was awake and watching the storm too. 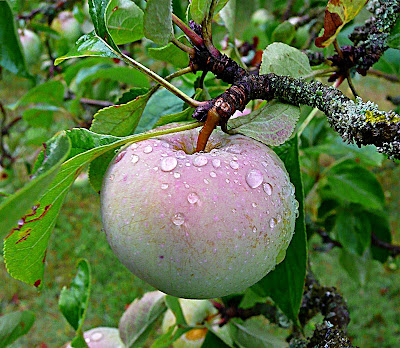 It rained this morning.
In French, people say that lightning "falls" from the sky — « la foudre est tombée sur une maison », for example. It's just an expression, but I think it's a funny one. One French lightning expert I read put the verb tomber in quotation marks when he used it in this context. His name is Christian Bouquegneau, and he says that balls of lightning probably occur but there is no scientific proof of their existence.

One night, 10 or 12 years ago in San Francisco, where lightning and thunder are rare occurrences, we had an electrical storm. I was standing in front of a sliding glass door and watching the display. There was a crack of lightning and I saw — I swear I did — a ball of fire or lightning or whatever it was fall into our little back garden and zoom, bouncing, across the width of the yard before disappearing into darkness. 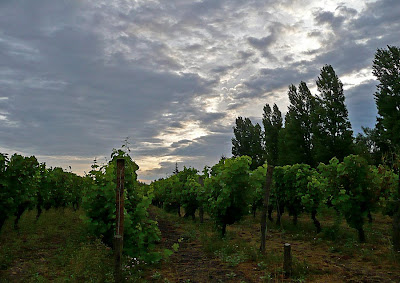 Morning sky, 23 July 2009 at La Renaudière
I had never seen anything like that in North Carolina or Illinois, where we often had awe-inspiring, violent, scary thunderstorms. I told a guy I worked with in California about the ball of lightning that had skidded across my back yard. He said he had seen the same thing one time — at his grandmother's house in Missouri. But in his case, he said, he and his grandmother watched the ball of fire come in a window on one side of the house, bounce and roll through the house, and go out a window on the other side.

Emm's comment on yesterday's post reminded me of all this. I guess I never thought there would be such violent weather here in the Loire Valley. I do remember rare but impressive thunderstorms in Paris back in the early '80s, when I last lived there. Usually the weather here in northern France is very mild, though. 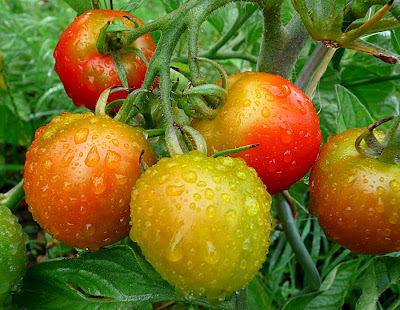 Tomatoes in the garden
It was extremely hot yesterday afternoon, with temperatures again approaching 90ºF. The humidity was high. It started raining, with just distant rumbles of thunder around Saint-Aignan, early in the evening, and I have the impression that it rained all night. It's raining now. It's the kind of light steady rain that sinks right into the dry earth.

By the way, yesterday I made plum sauce with those little wild red plums. It has salt, sugar, hot red pepper flakes, vinegar, and diced ginger root in it. We're going to have some with grilled pork chops for lunch today.
Posted by Ken Broadhurst at 05:57