Today is Bastille Day, which is « le 14 juillet » in French. Last night we went to see the fireworks display down by the Cher River in our village. Our friends from Normandy went with us, and after the display we ran into our neighbor the mayor, and her husband. It was nice to get to introduce everybody. 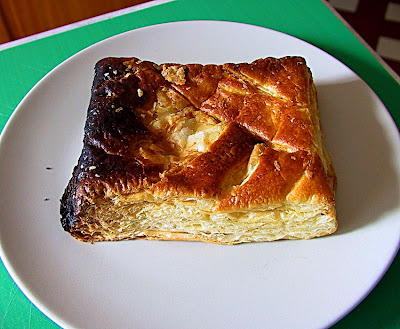 You heat the puff-pastry square up in a warm oven and then
cut it into bite-size pieces to eat with your apéritif wine.
Before going out to see the fireworks, we had our Bastille Day dinner at the house. It wasn't anything extraordinary, but it was all pretty good (if I do say so myself). As an apéritif, we opened a bottle of sparkling Touraine wine with some galettes de pommes de terre, a local specialty. The galettes are a puff-pastry square made with wheat flour, butter, and pureed potatoes, and they are often served with before-dinner drinks here in Saint-Aignan. 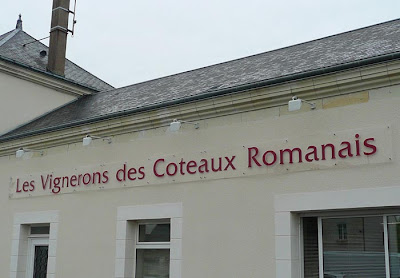 The wine co-op in Saint-Romain-sur-Cher
For dinner, we had a tomato, basil, and mozzarella salad with olive oil and balsamic vinegar. These were the first ripe tomatoes from this year's garden, and the basil plants are ones Walt grew from seed. As a main course, we had a steak with a shallot and white wine sauce (very light), some green beans from the freezer (last year's crop), and some French fries. We had a cheese board and then a dessert of plum tart.

With all that, we've been drinking wines from two local « caves coopératives » — wine co-ops — over this long weekend. One co-op is the one I really like up in Saint-Romain-sur-Cher, just about 5 miles north of Saint-Aignan on the road to Blois. The name of the co-op is Les Vignerons des Coteaux Romanais. 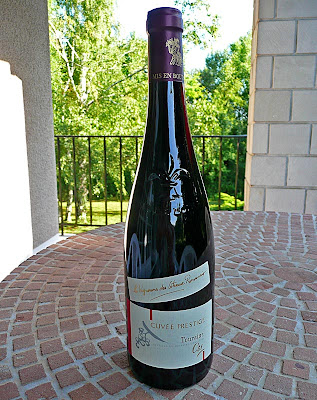 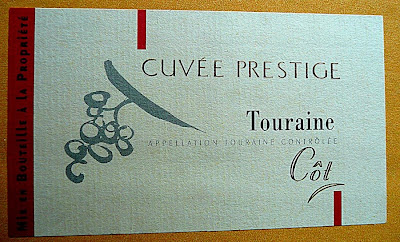 Here's the 2007 Côt and a close-up of the label.
The wine that was the biggest hit was a 2007 Côt. Côt is a local red-wine grape. It's the same grape used to make the dark wines of Cahors in southwestern France, but down there the grape is called L'Auxerrois. The same grape is called Malbec is many parts of the world. A lot of Malbec wines are made in Argentina. 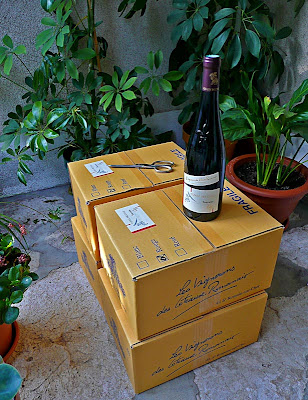 Two cases of the 2007 Côt ready for the trip back to Normandy
Our friends from Normandy were so impressed with the 2007 Côt wine that we all drove up to Saint-Romain yesterday morning. Each of them bought a case of the wine to take back home (Normandy is not a wine-producing area). The case price is 12 x 3.60 euros, or 43.20€. Not bad for a nice red that will keep for several years in the cellar.

While we were at the Saint-Romain co-op, I had my two 10-liter jugs filled with the local white Chardonnay. I bottle it myself. Twenty liters costs 26 euros, and that's the equivalent of 26 bottles. I prefer that Chardonnay to the local Sauvignon Blanc wines. 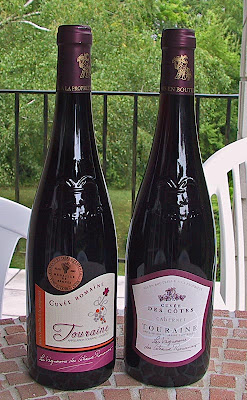 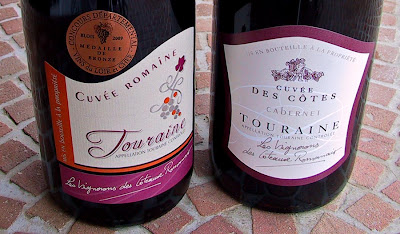 These are the other two Saint-Romain red wines
that we sampled over the weekend.
I also bought two other bottles for dinner last night. One was a 2006 Saint-Roman Cabernet Franc — Cuvée des Côtes — and the other was what the co-op calls its Cuvée Romaine — the traditional blend here in the Touraine wine-production area. That wine, a 2007, is made with a combination of Gamay, Cabernet Franc, and Côt grapes. Both the Cab. Franc and the Tradition were good, but not as good as the 2007 Côt, in our humble opinion.

Before dinner, we had a taste of a Touraine sparkling wine from the co-op over near Chenonceaux that's called La Gourmandière. I posted about that place, here, recently. 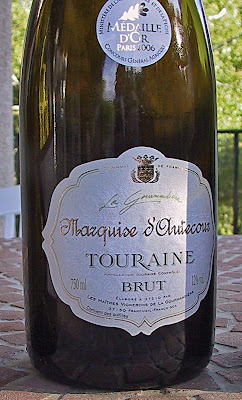 A 2006 Touraine Brut sparkling wine from La Gourmandière
I like the co-ops because they have regular business hours and you can drop in at your convenience. The Touraine wines are good and prices are reasonable. When you buy from small individual producers in Touraine, you often have to call ahead and make an appointment. It's a little more complicated, though it can be very interesting to see the old wine caves and cellars they operate out of.
Posted by Ken Broadhurst at 10:17