Tours the city, Asian foods, and the poor dog

Yesterday's drive over to Saint-Avertin, a town that borders on the city of Tours on its southeast side, took us an hour. It was stressful because we were driving in the dark. Walt was behind the wheel. Neither of us is used to night-time driving any more. Headlights were almost blinding. Then it started raining. The fact is, however, that we found the veterinary clinic easily and arrived 15 minutes early. We got there before sunrise.
After my 30-minute meeting with the surgeon, we drove from Saint-Avertin across a bridge that spans the Loire river and into the area known as Tours-Nord ("north Tours"). The historic center of Tours is on the south bank of the Loire. The other half of the city is north of the river and is much more modern. I was surprised how urban it felt. I'd been there before, but I had never driven through residential neighborhoods in the area. It sure is a different world compared to the Saint-Aignan area. The city of Tours has an area of 34 km² and a population of nearly 140,000. The village we live in outside Saint-Aignan has an area of 32 km² and a population of fewer than twelve hundred. It's almost lonely out here.
Our destination in Tours-Nord was this little supermarket: 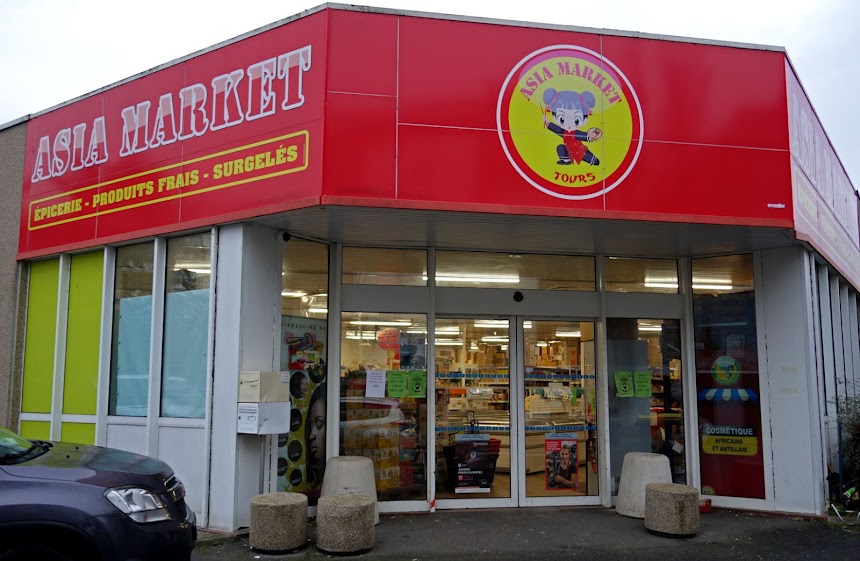 At Asia Market, we bought bottled sauces, bags of spices, noodles, fresh okra and bok choy, frozen okra, shrimp (3 lbs.), pot-stickers, spring rolls, and more. The last time we had shopped in an Asian grocery was probably two years ago. There are two such groceries in Blois, and two in Tours-Nord. Blois is closer to Saint-Aignan by about 20 minutes, but we are reluctant to go into cities these days because of Covid. Our local Saint-Aignan supermarkets have expanded their Asian food offerings over the past two years, but they still can't compare to an actual Asian grocery store.
As of now, we're scheduled to go pick up Tasha the Sheltie early this afternoon and bring her home. However, I have to call the veterinarian surgeon in a couple of hours to confirm that schedule. He spoke of complications when I talked to him yesterday afternoon — complications that might mean Tasha's convalescence will be longer than expected. Wish us luck.
Posted by Ken Broadhurst at 06:35