Yesterday I cooked my January 1 black-eyed peas in the slow-cooker for 10 hours. Also in the pot were a carrot,
a long stalk of celery with leaves attached, two big bay leaves, a large shallot, a garlic clove,
three dark-green leek tops, a generous amount of black pepper,
and a tablespoon of crushed hot red pepper. 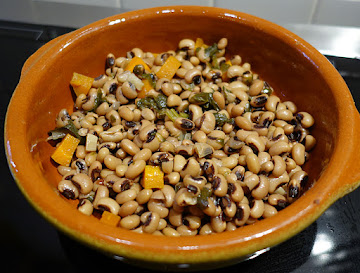 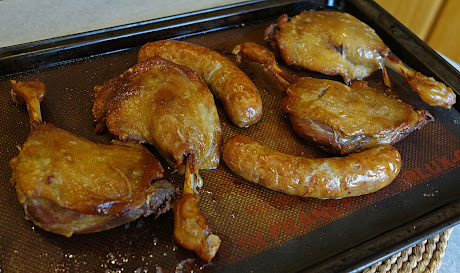 I bought the duck confit (cuisses de canard confites) at the supermarket in sous-vide packaging (vacuum-packed).
Four duck legs cost 10 €. The saucisses de Toulouse were raw, so first I poached them in water.
Then I put the duck legs and sausages on a baking sheet and browned them in a hot oven. 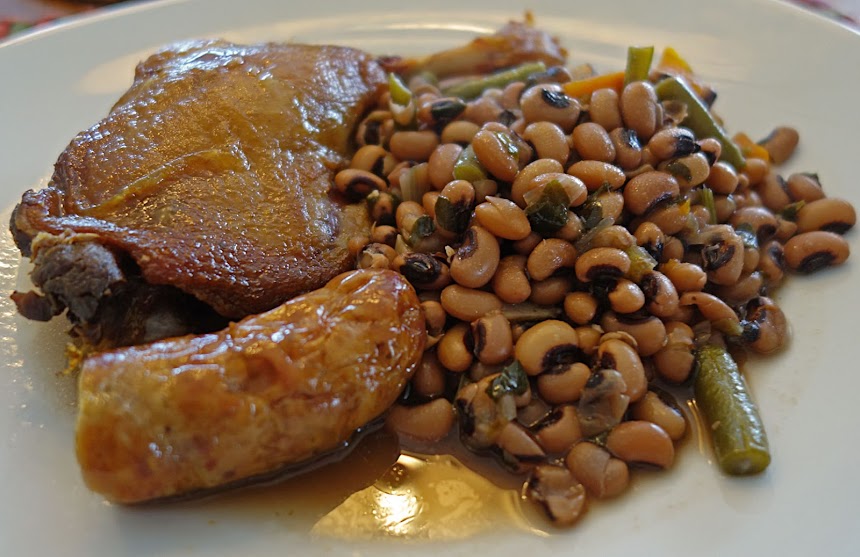 When the beans were cooked, I took out the carrot, shallot, and celery, chopped those up, the put them back in the pot
with the beans. I also put in a handful of cooked green beans cut into 1-inch pieces. For lunch, we each ate
one duck leg-and-thigh piece, half a Toulouse sausage, and a good portion of the black-eyes as described.
We had a nice red Chinon wine (Cabernet Franc) with that.
Some duck fat went into the beans. 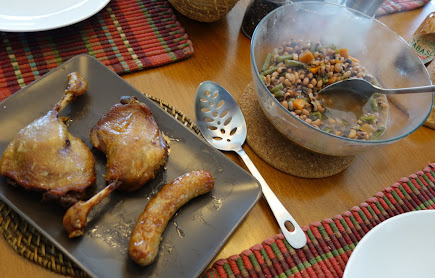 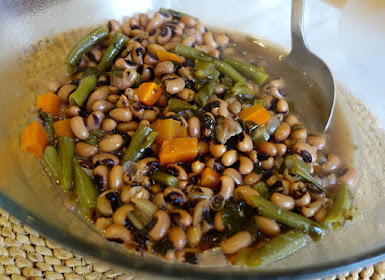 Personally, I really enjoy black-eyed peas. I've eaten them since I was a child. Let me say, though, that I love all beans.
Black, red kidney, white, baby limas, butter, Soissons (giant limas), French flageolets, yellow wax, purple wax,
green beans, haricots verts, lingots blancs, haricots tarbais, cranberry, chickpeas (garbanzos), navy,
crowder peas, field peas, cowpeas, lentils, pink, pinto... which ones have I forgotten?
I'm glad I don't have to choose to eat just one variety of bean to like.
And I eat black-eyed peas year-round, not just on New Year's Day.
I guess I qualify as a lucky guy.