Last night around 8:30 we had a very strong thunderstorm, with a lot of lightning and thunder. It had been hot in the afternoon, and the storms were moving up into central France from Spain and the Pyrenees. We happened to be out and had to run home in the rain at 9:00. We'd had apéritifs at a neighbor's house with two women who are my age and have lived here for 40 years or more. We heard a lot of good history about the hamlet over the years, and some good gossip about current and past residents. It was fun. 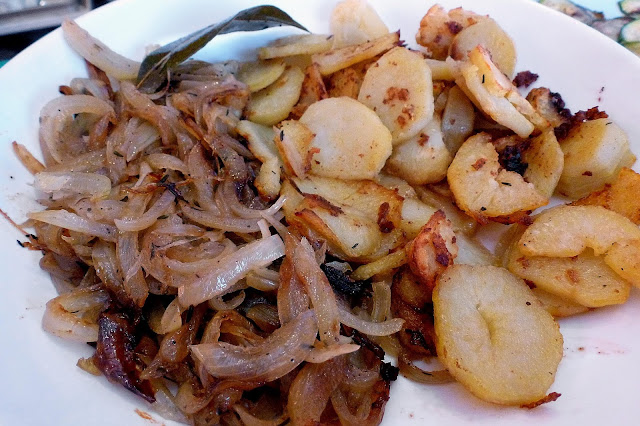 Today I'll post about a zucchini pie I made a couple of days ago. We are harvesting one or two (or more) zucchinis (courgettes) from our vegetable garden every day. We've made a zucchini lasagne. We've blanched and frozen zucchini rondelles for later. We've been making zucchini stir-fries and what they call poêlées (skillet dishes) in French, with various other vegetables and sauces. Then in our database I found this recipe for a tarte croustillante aux courgettes. 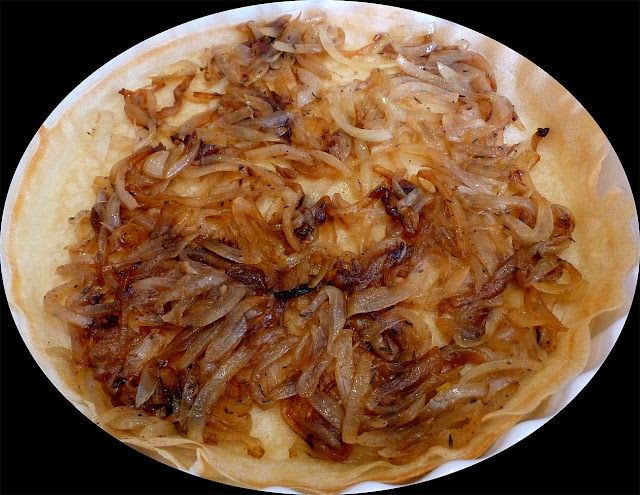 The tarte can be made with North African feuilles de brick, or with phyllo dough, or with a standard pâte brisée pie crust. In other words, you don't have to make dough — just buy it. With feuilles de brick, you first brush a pie plate with a little bit of olive oil. Then you layer in five feuilles one at a time, brushing some olive oil on each one. You bake that in the oven for about 10 minutes to crisp the crust up. You could do the same with layers of phyllo. Or pre-bake a standard pie crust so that it's fairly crispy. 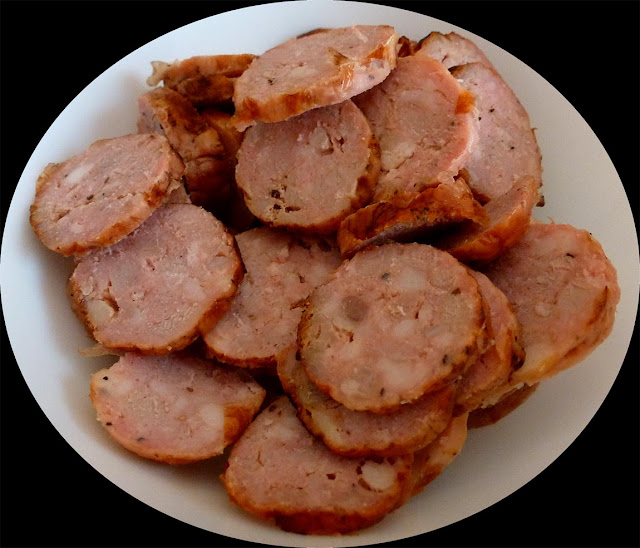 Then you slow-cook some sliced or diced onion at low temperature until the onions are browned and caramelized. You can add a teaspoon of sugar to the onions to make them brown without burning them. A splash of white wine at the beginning of the cooking time can tenderize the onions quickly, but you have to let it all evaporate before you stop the cooking. Add some thyme and a bay leaf, along with salt and pepper. You want all the ingredients for this tart to be dry when they go into the pie shell so that it stays crispy. 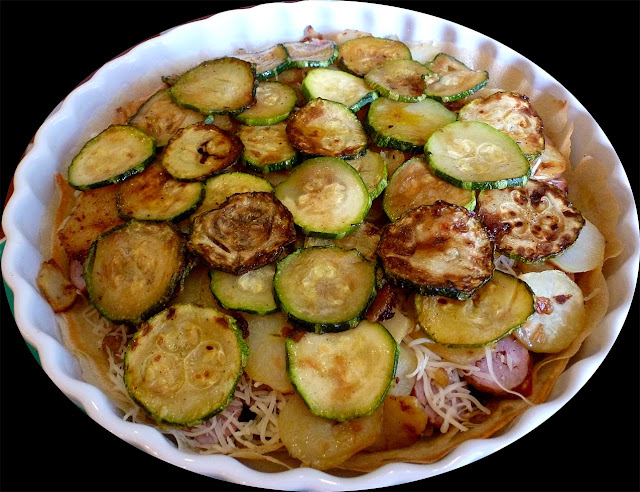 I admit I took the whole morning to do all this cooking. Most of it was just waiting, so I could do other things as all the ingredients cooked on low in a skillet. After browning the onions and setting them aside, I browned some slices of steamed potato in the same pan. And finally, I browned a sliced zucchini, a big one, also in the same pan at low temperature, in two batches. I already had a couple of leftover sausages that had been poached and then finished on the barbecue grill a couple of days earlier. So all the ingredients for the tart were cooked and slightly caramelized. 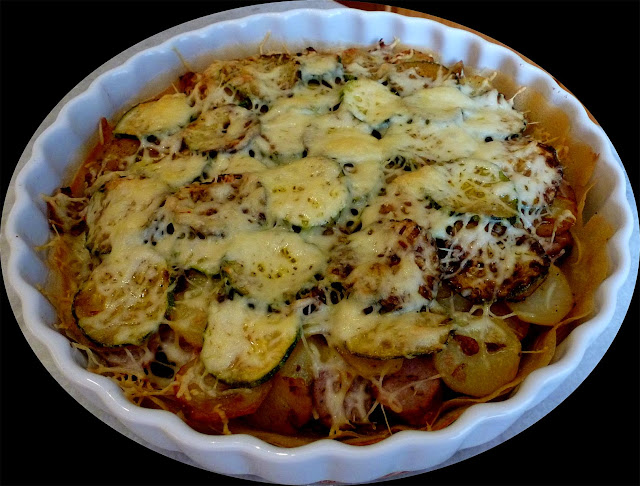 Finally, you layer all the ingredients in the pre-baked pie shell, starting with the onions. On top of the onions I put a layer of zuke slices and then a layer of potato slices. I sprinkled on some grated cheese (but not too much). Then I put in a layer of sausage slices, another layer of zucchini slices, and, finally, a little more grated cheese. The tart then goes into the oven at 400ºF (200ºC) for 15 minutes or so until the cheese melts. Serve it hot or at room temperature.
Posted by Ken Broadhurst at 06:30