The last place Sue and I went into at La Borne was the first one we had tried to get into after arriving in the village. We had arrived too early, it turned out, after having a good lunch in the nearby town of Henrichemont. It was about 2:15, but we soon learned that all the pottery shops and workshops didn't open until 3:00 p.m. for the afternoon. We decided to take a long walk around the village while we waited. 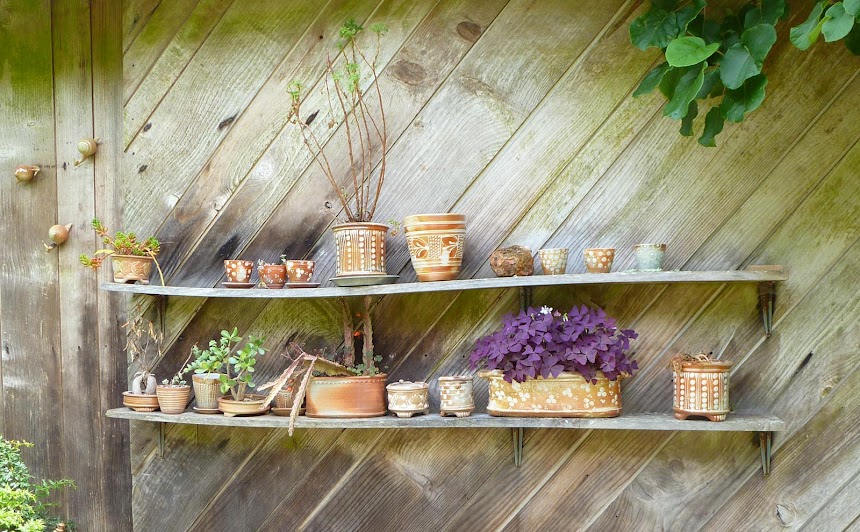 Above is just an example of the pottery we found in this shop when we finally got back to it around 5:00. In the meantime, we had had a good time looking around in the ceramics center and the pottery museum, as well as three or four other boutiques. As I've said, all the people we met were cheerful, curious about us Americans, and informative about the ceramics and pottery. 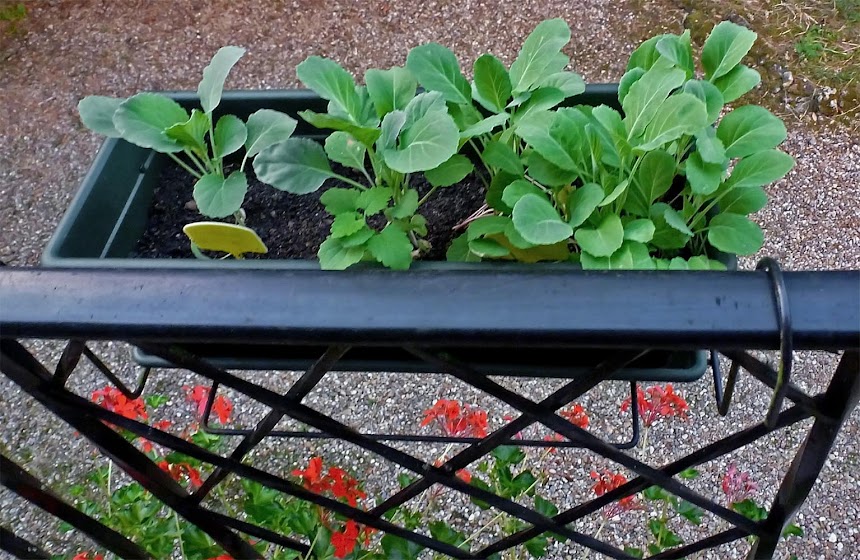 I'll get back to La Borne in posts tomorrow and over the next few days, but right now I have gardening on my mind. Specifically, greens, including kale and collards. Both these varieties of cabbage that don't form a head, but instead grow as a bunch of loose leaves, are coming back into fashion in France. Just above are some collard greens seedlings that I've had planted in a jardinière out on our front terrace this summer.
Collards and kale are members of a set of vegetables like, for example, parsnips, which have now come to be considered légumes oubliés — "forgotten" or heirloom vegetables — in France. Collard greens are known by names like chou cavalier (I don't know why), chou en arbre ("tree cabbage" because the leaves grow on tall, thick, semi-woody stalks), 'or chou à vaches ("cow cabbage" because the leaves were formerly fed only to livestock). 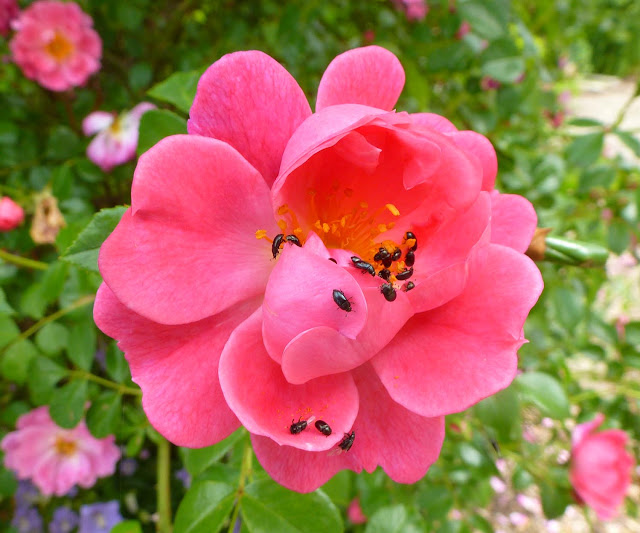 In May, I had grown some lacinato or "dinosaur" kale (a.k.a. Tuscan kale) from seed in a planter box. The seeds came up abundantly and a couple of weeks ago Walt planted the seedlings out in the vegetable garden. They started growing faster but now they have been attacked by an insect pest called the "flea beetle' in English, or des altises in French. At least I think that's what they are. These beetles look like the ones you can see the on this rose, in a photo I took over in La Borne a month ago. The variety of altises infesting our garden must be ones that loves to eat cabbage leaves. 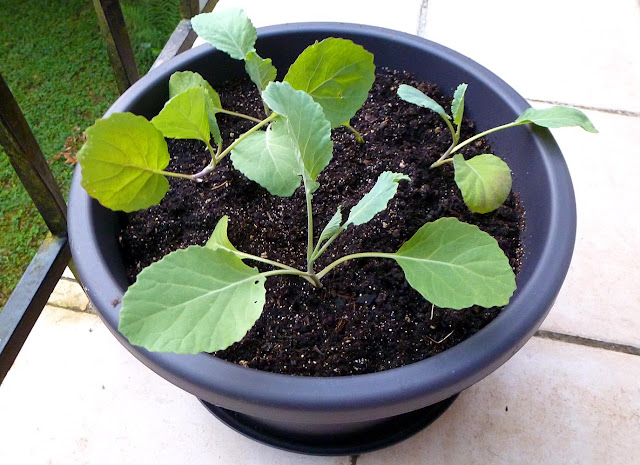 A lot of people love to eat cabbage leaves, too — collards included. Not only are they a prized food in the U.S. South, but people in Portugal, northwest Spain, and Brazil enjoy them too. In regions with mild climates, including those and the Loire Valley, they are a green vegetable that can grow all winter long. Before refrigerators and freezers, they were among the few green vegetables people could count on in wintertime.


Yesterday I thinned out my collard green seedlings and replanted them in other planter boxes and pots. One planter box of seedlings gave me three, plus one round pot, as in the photos. I'm glad I hadn't yet planted them out in the garden, where flea beetles wouls surely have attacked them.

Maybe the altises won't find them up here, and the leaves will stay as pretty as they are right now. I hope they will grow big and strong so that they can resist future flea beetle infestations. I'm going to keep them up here on the terrace for a few more weeks, or maybe a month, before I transplant them out in the garden plot. They should give me green leaves all winter.
Posted by Ken Broadhurst at 07:00