Yesterday we finally got around to doing some important spring cleaning, at least two months late. Circumstances made it impossible for us to get started on it earlier. We had to get the garden plot prepared and planted in May. We had a house guest for two weeks in June. And I've been feeling lousy for more than a month now. Old age, I guess. Allergies. Skin cancer. I'm just starting to feel better. 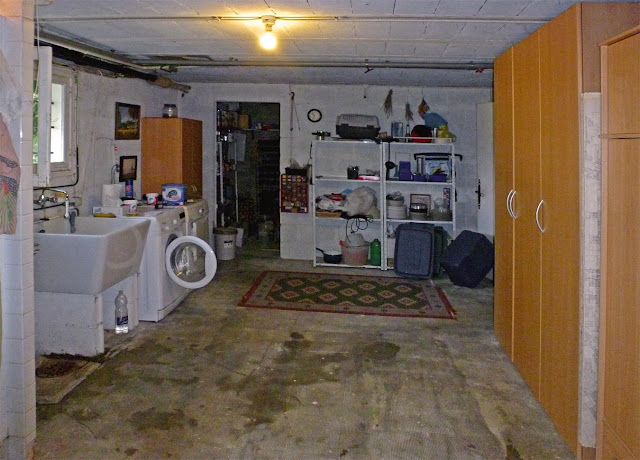 When we moved here 15 years ago, we didn't know what to expect of this house. We had only owned one house before, and it was a completely different kind of place. It was built of wood, and was situated on the side of a steep hill in San Francisco. The house was on four different levels. We didn't have, for example, a utility room. From the ground-level garage, we and plumbers had easy access to pipes and fittings that needed maintaining. Importantly, we were on sewer mains that took away gray water from our sinks and showers, and sewage from our toilets. 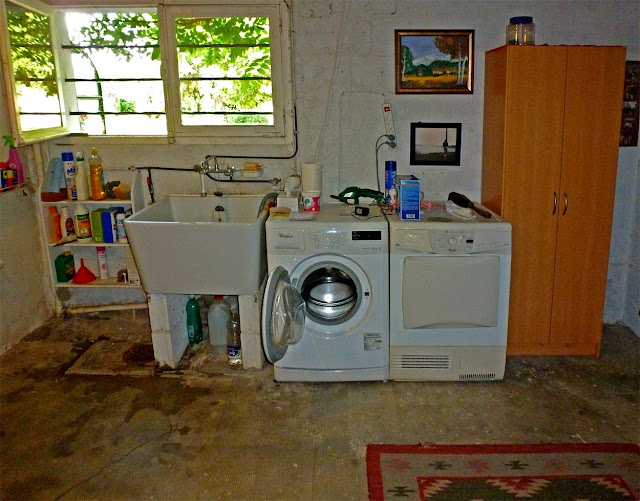 This house in a hamlet near Saint-Aignan is built completely differently. It's all in brick and concrete block for one thing. It's called a pavillon sur sous-sol in French, but the sous-sol (basement) is at ground level, not below. The sous-sol is made up of four rooms: There's a garage that would possibly be big enough for two small cars. There's an entry hall, which almost feels like wasted space because nobody ever spends any time in it. There's a small, unheated pantry or cellier for storing food and wine — it has a dirt floor. And there's and a big utility room that houses the boiler that heats water for the radiators upstairs that provide central heating, and our washer, dryer, laundry sink, and a shower that we use mostly as a place to rinse off the dog's paws when we come in from our walks in the vineyard. The utility room serves as what people in the northern parts of the U.S. might call a "mud room". In there we also have two freezers that we've acquired, three big storage cabinets that we put in ourselves, and also some sets of shelves for miscellaneous storage. Except for the entry hall, it's all "unfinished" space. 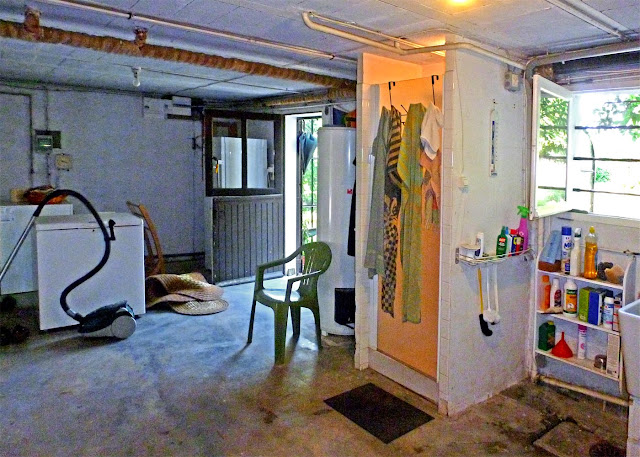 When you have so much unfinished space downstairs that is a kind of basement without being one at all, you know what happens. It fills up with stuff. We only put one car in the garage, so the rest of the space in there holds extra furniture that we just can't bring ourselves to get rid of, along with outdoor furniture, a big storage unit for kitchen things we hardly ever use but don't want to give up, a couple of unused bicycles, recycle bins to outgoing bottles and other recyclables... and on and on. You know what I'm talking about. The photos here are "after" shots of the utility room, and "during" shots of the garage where we hauled all the "stuff" from the utility room for storage while we worked. 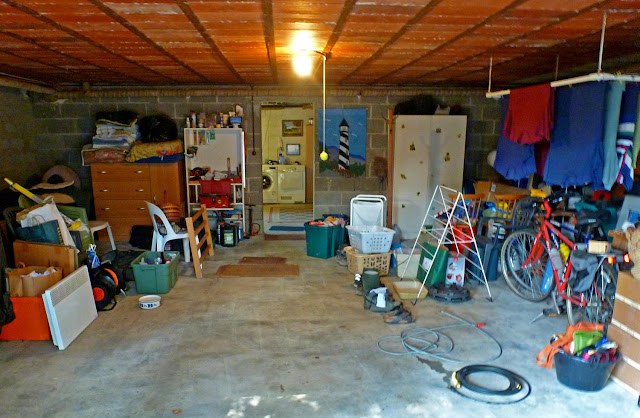 And then there are the drains! The house has a whole sewer system built into the concrete slab that it is built on. There are three "manhole covers" called regards in French, which give us access to the concrete conduits that take waste water from, for example, the kitchen sink and dishwasher down to entry-hall level and then under the floor out to the utility room, still under the floor, and finally outdoors, underground. The pipe built into the slab runs approximately horizontally, so it is easy for us to get it stopped up. 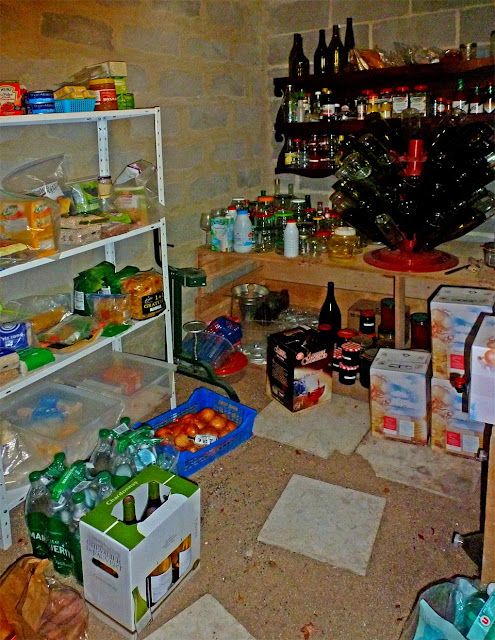 So every year we have to open the regards in the utility room and clean then and the concrete conduit out. It fills up with gunk. We have hard water, so calcium deposits combined with grease and vegetable matter combine to cause trouble. Yesterday was our day to clean out the "sewers" — note that water from the toilet has a separate pipe that takes it directly outside to the sewer mains, so that smelly stuff is not part of our problem.

When we came to live here. we had no idea how all this worked. We've learned. We have a power washer we can use to clean the under-floor conduits. It's a stinky, nasty job, but it works. As with most unpleasant tasks, the work gets postponed until it absolutely has to be done. Yesterday was that day. First we had to clean out the utility room. Stuff collects in there. We have rugs on the floor, and those have to come out because we don't want to get them wet in the power-washing process. The rugs themselves get pretty disgusting because the room is, after all, partly mud room. We feel proud of ourselves that this year we actually got the job done before it became a crisis. Everything is flowing. In addition, back in 2003 we were told by the real estate agent that the house had a septic system that would need to be cleaned out every ten years or so. It even says so in our deed to the house. 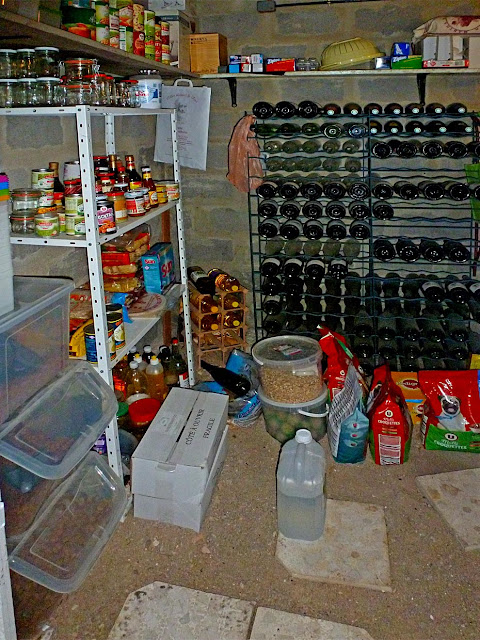 That was at best erroneous and, at worst, a flat-out lie. In reality, all our gray water ran (slowly) through a very long (150 feet or so) underground pipe to our back gate and then opened up onto a path running down a hill toward the north. The gray water just seeped into the ground, in other words. And the water and waste from the toilet went into a sealed concrete tank that was underground just outside the back door. It had to be pumped out every two or three months, and that got expensive. We did that for three years, and then in 2006 the town had sewer mains put in and we were required to hook our system up to them, at our expense. It was worth it.

These last two photos show the unheated cellier (the downstairs pantry). The third one up is the garage with its red ceiling and junk-covered floor, waiting for us to put the Citroën back in.
Posted by Ken Broadhurst at 06:50