One of the funniest, smartest, and most influential men in France died on Tuesday. His name was Jean-Pierre Coffe, and he was a television personality, a comedian, a cook, a prolific author, and a major force in the world of French cooking and gastronomy. He was 78 years old.


Coffe's comic schtick was to use gros mots (plain, sometimes crude language) for comic effect and shock value in calling the public's attention to how the French diet is changing, and not for the better. He was famous for the derision he heaped on junk food and on people who don't understand that younger generations in France need to be taught by example what good, healthy food is all about. Of bad food products or cooking methods, he would say, simply, C'est de la merde ! And of famous people he disdained (including ex-president Nicolas Sarkozy): C'est un con ! or C'est minable ! Everybody would laugh, but they knew he was serious. 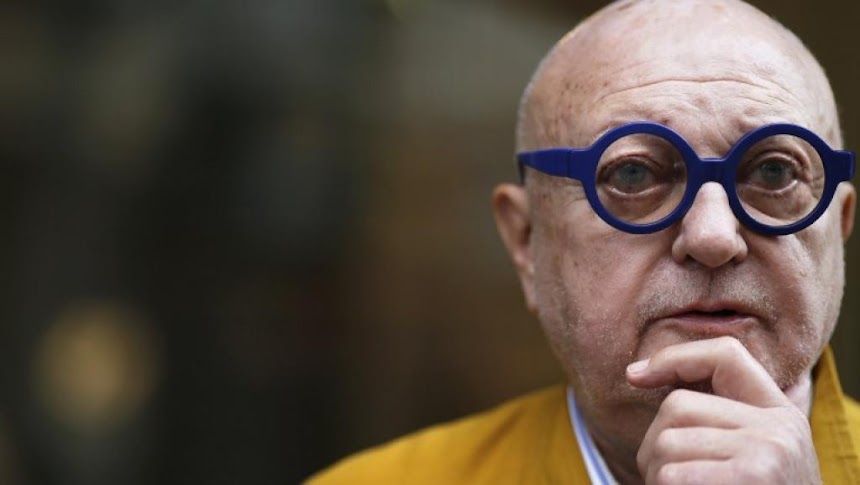 
In a way, Coffe (pronounced in one syllable, something between "cuff" or "cough") was the Coluche of his time. (If you don't know who Coluche was, sorry...) He affected the look and style of a clown, but there was a fine brain lurking inside his bald head, behind his outlandish round eyeglasses. Actually, he looked a little like Mr. Magoo, of cartoon fame. He was what is called a bon vivant, as well as a grande gueule (a loudmouth, in the best sense of the term). Here are some clips of his television appearances and performances:


Coffe was a major influence on (and — my impression — a kind of father figure to) Julie Andrieu, whose series of TV shows about the different regions of France, their products and recipes, is called Les Carnets de Julie.  I've written about her shows before, and recommend them to people interested in France and French food and cooking.


Coffe was also a fixture on the 30-year-old daily radio show called Les Grosses Têtes, hosted for years by the journalist Philippe Bouvard and more recently by the comedian  and TV host Laurent Ruquier. On that show, a panel of celebrities (writers, comedians, actors, journalists) answer questions submitted by listeners, which is an excuse for comedic ranting and raving and displaying a quick wit. There, Coffe was known for what were called called his coups de gueule (rants) and crises de colère (rages), all for comic effect.


Meanwhile, Coffe was the author of dozens of books on food, cooking, and gardening. In our small library, we have his book Le Potager Plaisir about vegetable gardening, and his collection of essays about food and its history called Le Bon Vivre and Le Vrai Vivre. I often pick these up when I am curious about some French cheese, poultry product, potato variety, shellfish, or regional specialty.


Jean-Pierre Coffe was awarded one of France's highest decorations, the Légion d'Honneur, in 2014 for his contributions to French culture as a journaliste gastronomique. He was also an important figure in French culture because he came out as bisexual a few years back, and lived out the last years of his life in a same-sex relationship. In short, he was an activist for progressive causes, and a very good one who will be missed. He was a unique figure, and I can't see anybody who might replace him.
Posted by Ken Broadhurst at 07:45