Here is an article published by the Carteret County News-Times newspaper in Morehead City, N.C., about a 19th century church building called the Purvis Chapel in neighboring Beaufort, N.C. 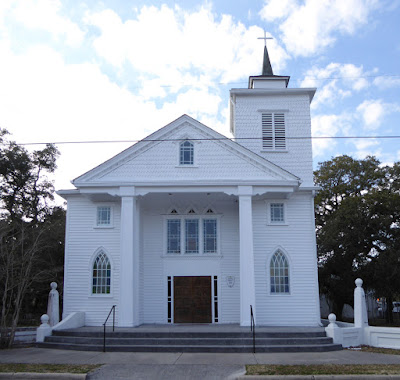 BEAUFORT — Lively singing can be heard each Sunday coming from a scenic church under large live oak trees at Craven and Broad Streets here.

While many appreciate the gospel music at Purvis Chapel AME Zion Church, they may not realize the church’s historical significance to the county and the nation’s African Methodist Episcopal Zion and Methodist church movements.

The church is in the National Heritage Registry and is recognized as the second church to join the AME Zion Church in the South in 1864. In addition, the church had been meeting for 10 years prior as a black Methodist body of believers, according to the Rev. Curtis Oden of Beaufort, a member of the church’s board of trustees who has compiled a history of the church. Rev. Oden also pastors an AME Zion Church in Cove City. 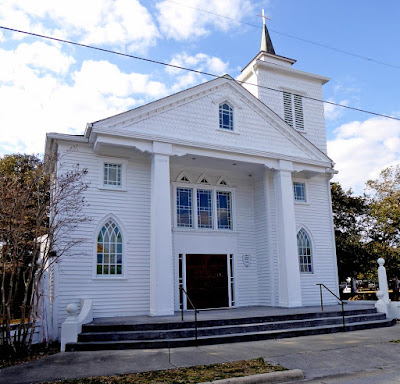 Rev. Oden is assisting another historian who is working on a book about the history of black churches in the county.

The church building is also believed to be the oldest in the county that’s still in use.

The church’s history is intertwined with the tumultuous Revolutionary War and Civil War eras, according to historical accounts. The building has served not only as a church, but also as a courthouse, school and hospital, and housed Union soldiers during the Civil War. 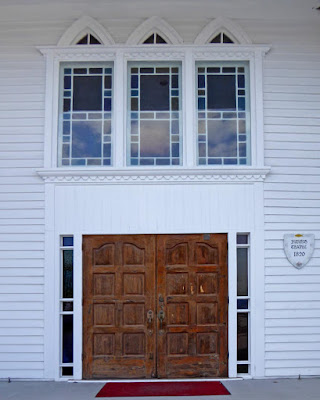 “It’s been a lot of different things to this community,” said the Rev. Margaret Blackmon, who currently serves as pastor of Purvis Chapel. “Where our fellowship hall is located is on the site of Beaufort’s first firehouse, which burnt down.”

Historians believe the current Purvis Chapel building sits on top of the remains of St. John Parish, which was built in 1724 by the British Anglican Church. Methodists moved in and began using the building in 1774 after the Anglican Church minister left during the Revolutionary War. In 1784, Bishop Frances Asbury with the Methodist Church in England visited Beaufort, and it’s reported that he donated the church’s first bell. That bell, made in 1798 in Glasgow, Scotland, now sits in the church’s balcony with a sign, and Rev. Blackmon said plans are to eventually place the bell back in the bell tower.

The present Purvis Chapel building was built in 1820. It was originally called Methodist Church and was part of the Methodist Episcopal Church South, according to Rev. Oden. The name Purvis is ascribed to a past popular revivalist, the Rev. James Purvis, who in 1834 led a soul-stirring revival in Beaufort. 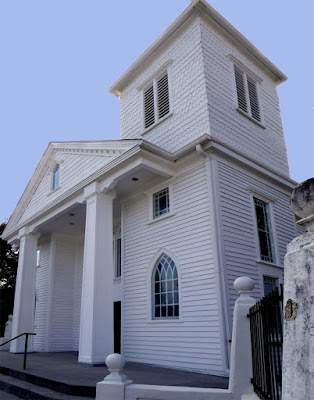 The original St. John Parish building was moved to Ann Street where First Baptist Church is now located to make room for the larger 1820 Methodist Church building, according to county historian and author Mamre Wilson of Beaufort. The St. John building was eventually torn down.

Both white and black Methodists in Beaufort worshipped together in Purvis Chapel as one congregation until 1854, with blacks sitting in a balcony area. While most of the balcony has been removed, one small section still remains.

Then, at the convincing of the Rev. James Walker Hood, a pastor sent to New Bern and Beaufort in 1864 as a missionary with the AME Zion Church of America, based in New York City, Purvis Chapel decided to break with the Methodist Episcopal Church South and become part of the AME Zion Church. From that point on black pastors were brought in.

Historians say Rev. Hood landed in New Bern around January 1864, but was unable to preach there because of the Civil War fighting in the area. He sailed to Beaufort and preached his first sermon in the South at Purvis Chapel.

He preached at St. Andrew’s Chapel (now St. Peter’s) in New Bern on Easter Sunday 1864, which became the first church to join the AME Zion Church in the South. Purvis Chapel joined Dec. 17, 1864, becoming the second.

Rev. Hood went on to become a great bishop in the AME Zion Church and founded conferences in North Carolina, Virginia, South Carolina and Georgia. He also became influential in politics and served as the North Carolina assistant state superintendent of public instruction, with the major duty of founding and supervising schools for blacks.

P.S. As always, you can click or tap on the photos to see them at full size. All are mine, except as noted. You can read the full article here — it includes a photo gallery.

P.P.S. Yes, I am back in France, recovering from jet lag and a slight cold (or pollen allergies). Our weather is lousy, so taking photos isn't happening right now. Thanks to everybody for the birthday wishes. Given my general fatigue and malaise, the birthday went by in a blur.
Posted by Ken Broadhurst at 07:30