If you don't live in France, you probably don't cook or eat rabbit very often — if at all. It's a standard item in France, the way duck is. Over here, people don't just eat chicken and turkey, but also guinea fowl and pheasant and quail. And rabbit.


We cooked our lapin de Pâques yesterday. Walt and I have been cooking rabbit at Easter for more than 30 years now. It all started two or three years after we met back in 1981 in Paris. In 1982 we went back to live in the U.S., in Washington DC. 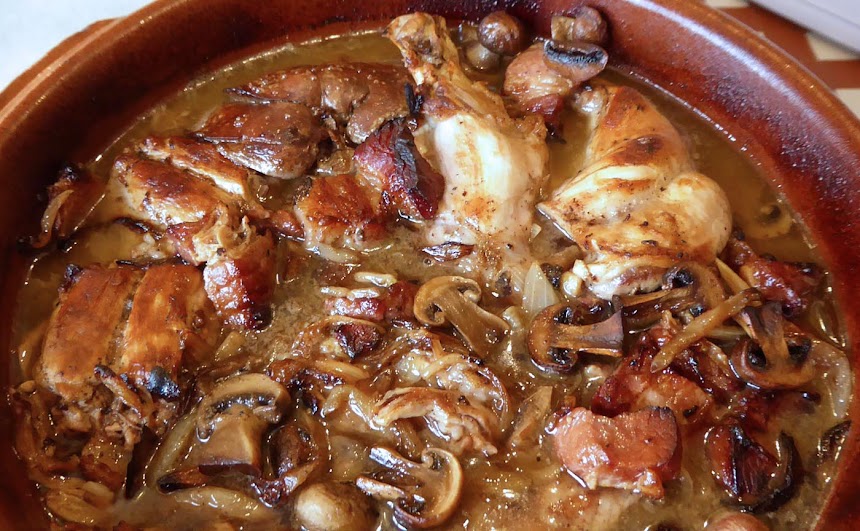 Here you can see the two "saddle" or filet sections on the left, and the liver and thigh sections toward the top.


Then in 1984 or 1985, Easter rolled around and there were pictures and stories about Easter bunnies all around us. That reminded us that we had really enjoyed having rabbit for dinner in restaurants when we lived in Paris. I went on a search and actually found rabbit in a market (maybe Eastern Market?) or supermarket in the DC area. I don't remember where exactly.


So we started our own "tradition" of cooking rabbit every year for our Easter dinner. Yesterday was no exception. On Saturday I went to the open-air market in Saint-Aignan and bought a nice locally raised rabbit, all prepared for cooking. All I had to do was cut it up. Basically, you get two big fat back leg-thigh sections, two pieces of "breast" (the saddle or filets), and two smaller front legs when you finish carving. Rabbit meat is very lean and not gamey. We are talking about rabbits that are raised for food, not wild animals. I did a couple of detailed posts about lapin en gibelotte a few years ago. 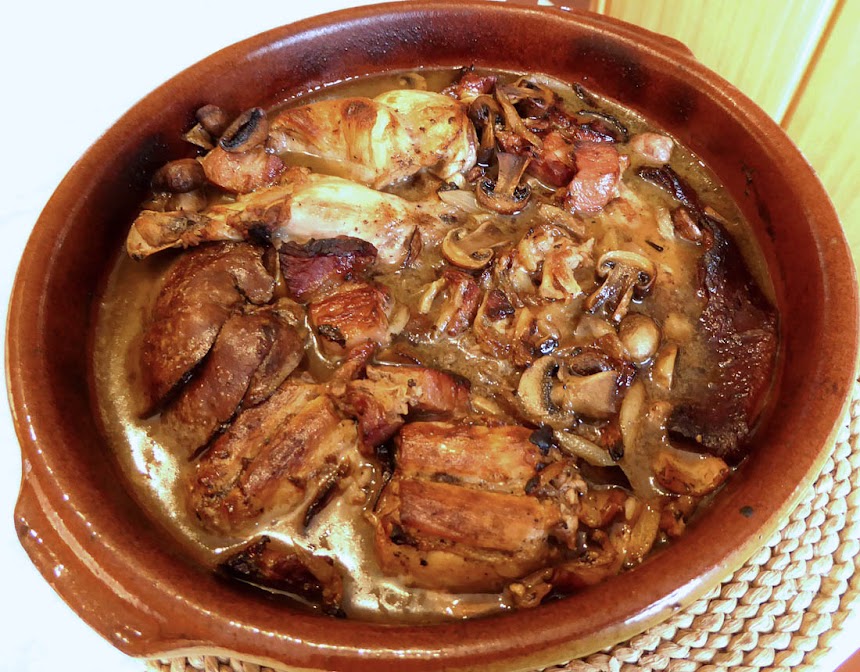 Cooked with the rabbit are onions, shallots, garlic, mushrooms, smoked bacon, and white wine, with bay leaves, salt, and pepper.


One of the simplest and most delicious ways to cook rabbit is to make what is called a gibelotte (a kind of fricassée). You brown some onions, garlic, and mushrooms in a pan along with some lardons fumés (chunks of smoked bacon or ham). Take all that out of the pan, set it aside, and brown the rabbit pieces in the same pan.


Then put the onions and all back in the pan and add in some wine and some chicken or rabbit broth — just enough to not quite cover the rabbit pieces. You want them braised and browned, not boiled. Put the pan on to simmer either on top of the stove or in the oven for an hour or so. Serve with rice, millet, quinoa, or boiled potatoes and either a salad or a vegetable like haricots verts, broccoli, kale, or collard greens.
Posted by Ken Broadhurst at 07:30