Where we ate in Montrichard: La Villa

It's been a week already. Last Wednesday, we went over to Montrichard and had lunch. Our original plan was to have hamburgers, but the new burger joint we had read about turned out to be exactly that. It's mostly a carry-out place, apparently. 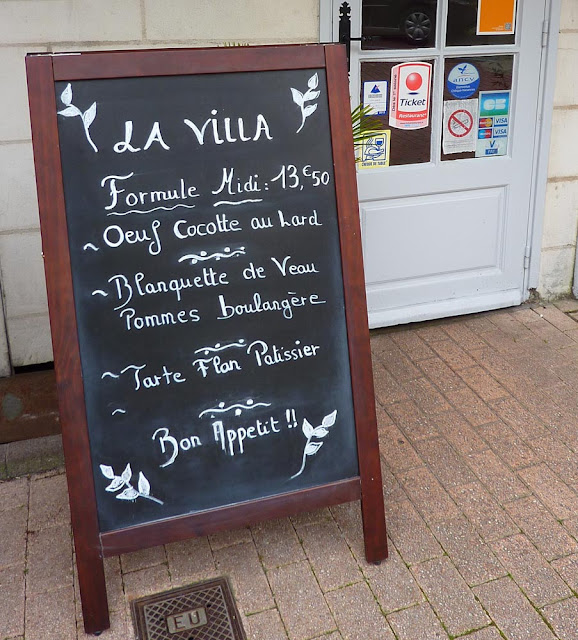 Here is the signboard outside on the sidewalk that advertises the daily special. The price is 13.50 euros, as you see. That's about $15 (U.S.). Noontime menus are often called "formulas" in France — this is the formula that will be your lunch solution today.


It's made up of a first course of a "shirred" or baked egg with bacon (the word lard in French means bacon or pork belly, and poitrine [breast] is a synonym — the meat is often smoked or fumé). A shirred egg might also be called an egg en cocotte; it's baked in a ramekin. The verb is "to shirr."


The second course is a French classic, Blanquette de Veau. That's a white veal stew. (My recipe is unconventional because I put carrots in it. You can leave them out.) First you simmer the veal for a couple of hours with aromatic vegetables in white wine, and then you make a white sauce with that liquid, some butter, and some flour. At the end you put the veal back into the white sauce, add some button mushrooms and cooked pearl onions, and then squeeze in some fresh lemon juice to perk it all up. It's often eaten with rice, but potatoes or pasta are not unusual with a blanquette. At La Villa, the side dish is pommes boulangère, which is what we call in plain English "scalloped" or "au gratin" potatoes — probably without cheese. ("Scalloped" means thin-sliced.)

The dessert of the day is a slice of cream pie called a Flan Pâtissier. I've posted the recipe here before. I've never been able to make a flan as good as the ones you get in pastry shops or restaurant, however. The secret must be gelatin.

Anyway, here's the restaurant. La Villa has a full offering of French dishes on its carte, which means "menu" in English. You can have the formule or you can order à la carte. I just looked it up on Trip Advisor, and there it is rated as the no. 1 restaurant in Montrichard. It was very good, including the atmosphere and the service, which was friendly and fast, but not brusque. The couple who run the place (and maybe own it) both speak very good English. 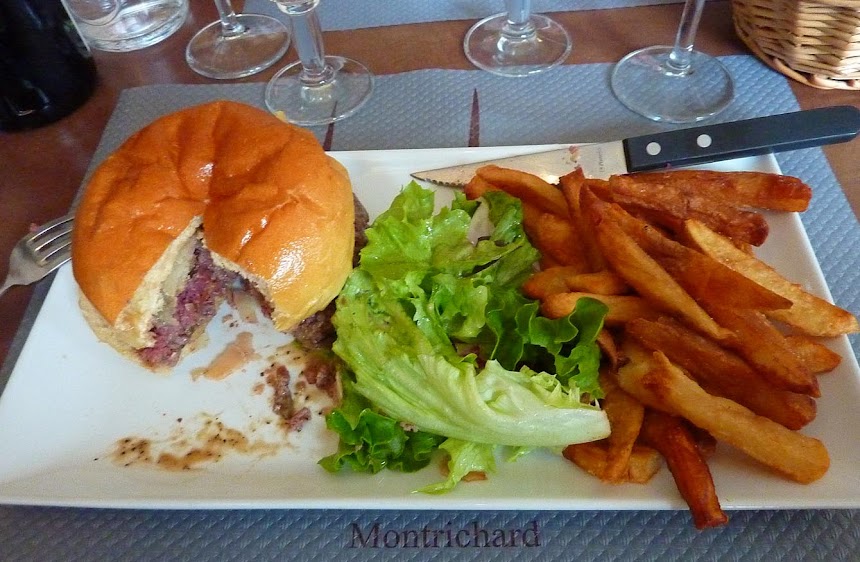 So what did we end up eating? Remember the fancy burger menu I posted a few days ago? Well, three of us let ourselves be tempted and had a La Villa hamburger for lunch, with ice cream for dessert. There's my hamburger above. It's the one called the Viennois on the signboard and came with slow-roasted onion slices, some shavings of Parmesan cheese, and a black-pepper sauce. It was cooked very rare. In France, it's normal to eat your hamburger with a knife and fork. The fries were house-made and good. Pain viennois is tender, Viennese-style bread made with milk, butter, and a pinch of sugar — that was the bun. For the price of the burger, we could have had the three-course lunch menu. Oh well.
Posted by Ken Broadhurst at 07:45