Exécrable. That's a nice word, isn't it? Well, "nice" might be a strange way to describe a word that is synonymous with mauvais, dégoûtant, and déplorable. That's the modern sense in French, according to the authoritative French dictionary, Le Grand Robert.

An older, now-literary meaning of exécrable brings up these synonyms in Le Grand Robert: abominable, détestable, horrible, maudit, odieux, repoussant, and répugnant. I'm not very literary, but I'm sure I could find ways to apply all these terms to the weather we've been having since early May. 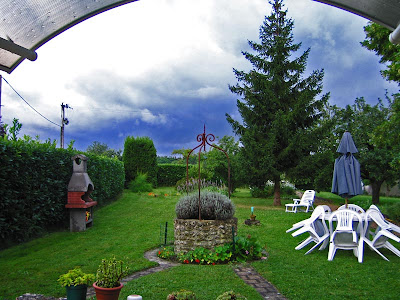 Notice the chaise longue beckoning. I guess we need to
buy a tent to put over it, since it rains every day now.
Will we always remember this summer as the one with the weather that Callie brought us? This was the summer we were going to spend on our new chaises longues out in the garden, where Callie could do less mischief than in the house. Ha! We bought those chaises in April, the last month when our weather was decent. Good purchase, eh?

At least we're not in western England, where towns including Tewkesbury and Gloucester are experiencing the worst flooding anybody there can remember. Our friend Janet's daughter and son-in-law live in Tewkesbury. Actually, the daughter, Corinne, is here in Saint-Aignan right now. The other day she said her house is on high ground and not in much danger of flooding. I'll have to call her today to see if she was right. Her husband is back there; I imagine him piling sandbags up around their residence. 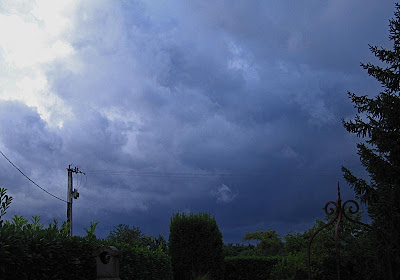 Yesterday about 6:00 p.m., looking west over our garden.
Corinne from Tewkesbury doesn't have to feel like she missing out
on rainy weather back in England while she's here in Saint-Aignan.
We've now had 51 mm, just about 2 inches, of rain in July. That's more than we had in December, or January, or February, or April, or May. But it's less than half of what we had in June. So we're doing pretty well. Summer is bound to start any day now.

We had hard downpours all day yesterday, and collected 15 fresh millimeters of water, over half an inch, in the rain gauge.

************
On a more positive note, Sunday afternoon was beautiful. About 7:30 p.m., a hot-air balloon floated right over our house. In past summers, we had balloon sightings several times a week. This year, the weather has not permitted... 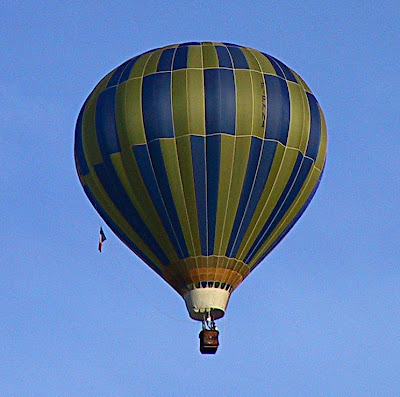 Notice the French tricolor flag hanging off
the left side of the montgolfière.
22 July 2007
************
Saturday morning I was able to go to the outdoor market in Saint-Aignan, dodging raindrops as I moved from one stand to the next. I didn't need much. Walt was making pizzas for lunch, so I went to see the mushroom lady and got a pound of nice brown champignons. I looked at some produce stands, inspecting the melons and haricots verts and just shopping. Nothing really appealed.

Suddenly, I noticed that there was only one person — one! — in line at the cheese stand. I couldn't believe it. Normally, the line stretches around the block (American image) and the wait is long. 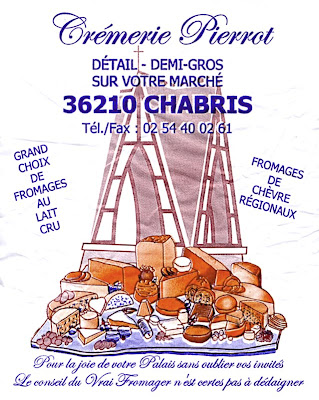 The cheese stand's wrapping paper. Chabris is about
15 miles east of Saint-Aignan on the banks of the Cher.
I ran over and bought some cheese. One thing we can get from the Saturday morning cheese vendor is parmeggiano — the supermarkets here don't carry it except in its grated form in little plastic bags. I also snagged a demi-sec goat cheese (known locally as un bleu) and a heart-shaped Neufchâtel, a salty cow's-milk cheese from northern Normandy.

The little poem at the bottom of the fromagerie wrapping paper says:

"For the joy of your palate, not to mention your guests',
The counsel of the cheese specialist is surely not to be disdained."
Posted by Ken Broadhurst at 07:40