Last Monday, a week ago already, I was in Paris at CHM's. When I woke up it was pouring rain. We decided to stay in and work some more on CHM's DSL connection and wireless network. By about 10:30, we finally got it up and running. 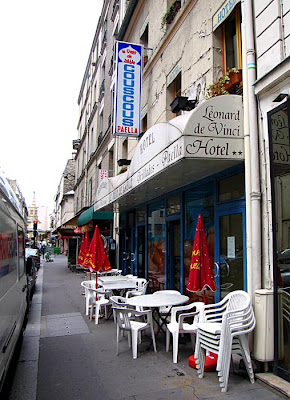 Le Vent de Sable couscous restaurant at 31, rue
Mademoiselle in the 15th arrondissement, Paris.
After a quick errand — a trip by car over to the Old England store on the Avenue des Capucines, near Opéra — to buy some Fortnum and Mason tea that CHM can't find elsewhere in Paris — we headed for a lunch of couscous at the Vent de Sable restaurant on the rue Mademoiselle in the 15th arrondissement. 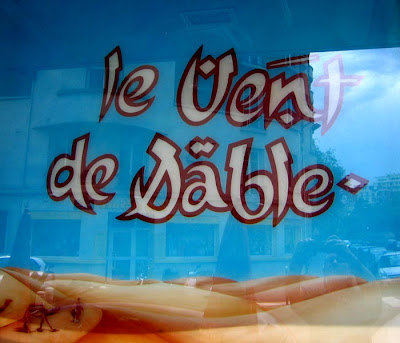 Walt and I had eaten couscous with CHM at the Vent de Sable last summer, and I posted about it here, with complete contact information for the restaurant. W. and I also had dinner there with our California friends Chris and Tony in April. So this was our third visit. (Do I sound like Michael Bauer?). 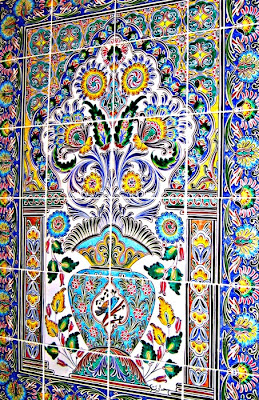 On the first and second visits I had the couscous méchoui, which is couscous; vegetables in broth with hot sauce, raisins, and chickpeas; and a big piece of spit-roasted lamb. It was very good. 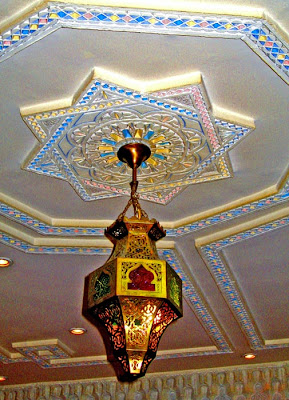 This time I decided to have couscous with kebabs of lamb and beef. That came with a merguez sausage. The lamb and beef were fairly rare or medium rare and the combination with the couscous, broth, vegetables, and harissa hot sauce was good. 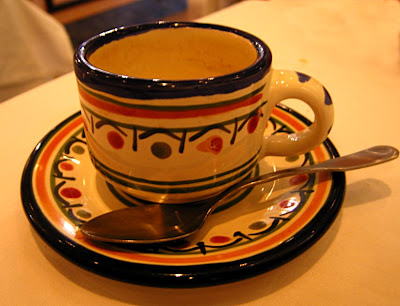 CHM decided to have chicken with his couscous and he said it wasn't as good as he had hoped it would be. The chicken was a little dry. It was a breast section that had been cooked separately from the broth and vegetables. 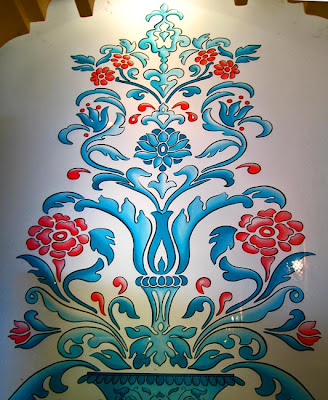 The pictures I took of the food at the Vent de Sable didn't come out, but I'm including some shots of the restaurant's décor, which is fairly elaborate. 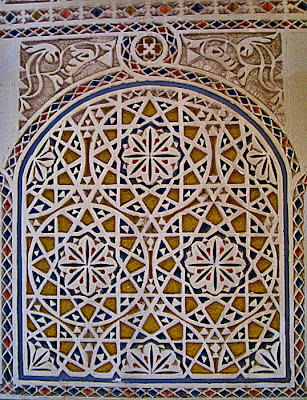 Here's the recipe I usually use when I make couscous at home. It's from Monique Maine's book called Cuisine pour Toute l'Année. As usual, click on the image to see an enlargement. 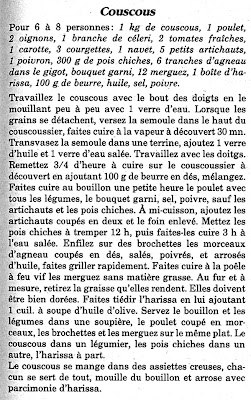 Here's my translation of the recipe. You'll notice that it is not very logically organized, so you have to study it carefully before you begin. By the way, you can use chickpeas out of a can and they will be perfectly good.

Work the couscous with your fingertips as you gradually humidify it with one cup of water. When the couscous grains start to separate, pour the couscous into the top of a couscoussier and steam it for 30 minutes uncovered. Pour the couscous into a big bowl and add a cup of oil and a cup of salted water. Work it again with your fingers. Put it back in the steamer and cook it for another 45 minutes while adding 3 oz. of butter cut into small cubes. Mix well. Cook a chicken in bouillon with all the vegetables (except the artichokes and chickpeas), the herb bouquet, salt, and pepper, for 50 to 60 minutes. After the first 30 minutes, add the artichokes, cut in half and choke removed. Soak the chickpeas for 12 hours, and then cook them for 3 hours in salted water. Cut the lamb slices into cubes and put them on skewers; salt, pepper, and oil them; grill them quickly. Cook the merguez sausages on high heat in a pan without adding any oil or fat. As they cook, spoon off the fat they release. They should be golden brown. Warm up the harissa pepper paste and add to it a tablespoon of olive oil. Serve the bouillon and vegetables in a tureen, the cut-up chicken, the kebabs and the merguez sausages on the same plate. The couscous in a bowl, the chickpeas in another, and the harissa separately.

Couscous is eaten in shallow soup bowls, each diner takes a little of everything, spoons on some bouillon and carefully adds just a little hot sauce.
Posted by Ken Broadhurst at 06:35