Off to Paris tomorrow

I'm going to Paris tomorrow morning and spending the night. Some old friends of mine who live in Chicago are visiting family there now, and I'll have dinner with them tomorrow afternoon. He is French and she is American. 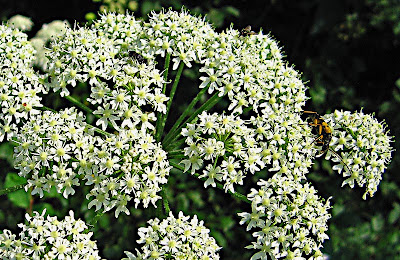 Summertime flowers and bugs
Click the picture to enlarge it.
Unfortunately, since Callie doesn't like to ride in the car, I have to leave her and W. at home. They will have nice weather, so I'm sure they'll enjoy walks in the vineyard and playing out in the back yard together. 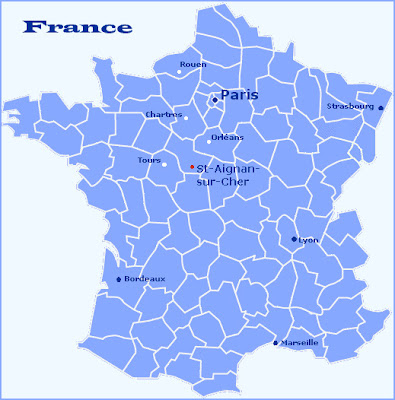 Paris is a three-hour drive from Saint-Aignan
I'm trying to decide what route I'll drive. Since I'll be leaving early on a Sunday morning, there won't be any traffic. I'm leaning toward driving straight north to Chartres and then cutting northeast through Rambouillet into the west side of Paris.

My friends are staying with his sister and brother-in-law in the western suburbs. They tell me I was there once before — in the middle or late 1970s! — but I don't remember it. Their house is in a town just two or three miles west of a suburban town I lived in from 1974 to 1976, so it is familiar territory. 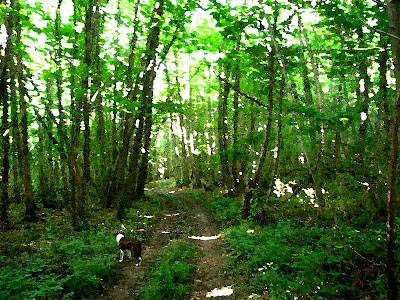 Callie on our walk in the Renaudière woods on 13 July 2007
After a long lunch in the suburbs, I'll drive into Paris to see my friend CHM and spend the night at his apartment. On Monday we plan to do some errands by car and then go have lunch at the Vent de Sable couscous restaurant in the 15th arrondissement, if it is open on Mondays. If not, I have a couple of other lunch places in mind that I know will be open.

You always have to plan around Sundays and Mondays in France, since so many businesses are closed Sunday evenings and all day Monday. 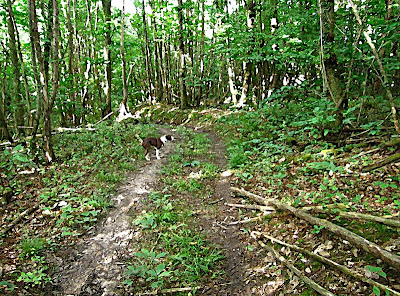 Callie in the Renaudière woods, 13 July 2007
The weather is supposed to be hot and sunny until Monday evening, when we might have thunderstorms. I'll get home Monday late in the afternoon and a new rain front is supposed to go through on Tuesday. By then, the garden will need watering anyway.
Posted by Ken Broadhurst at 08:09