Looking for a puppy?

I know two puppies that are looking for a home. No, not Callie — she's settled in here and we're keeping her. 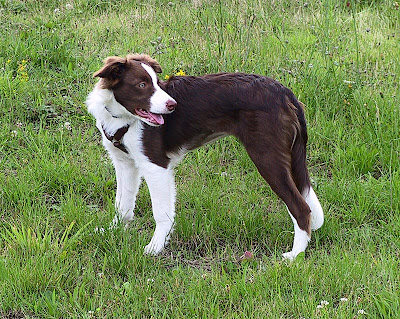 Long-legged Callie on 19 July 2007 at La Renaudière
One of the pups is one of Callie's litter mates. He's a little male who will be five months old tomorrow (as will Callie), having been born on Feburary 22 at the Elevage du Berger de la Vallée des Géants in the hamlet called Ventuile near the village of Blomard and the town of Montmarault in the Allier department in central France. His father is Vince du Vent des Moissons and his mother is Ruby du Berger etc. And his name is Cody. 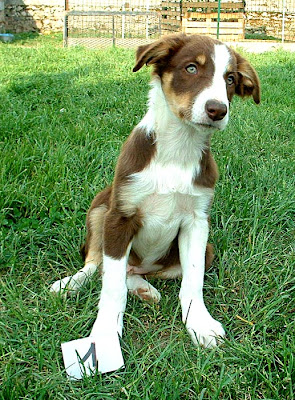 Bonjour. Je m'appelle Cody et je suis le frère de Callie.
If you want Cody, check the kennel's web site and contact the owner, Annick Vincent. Her e-mail address is on the site. I don't know what the purchase price is, but I'm sure Cody has had all his shots and medical checkups, and he is registered with the French kennel club as a pure-bred red Border Collie. Red and tan and white, I guess I should say.

Seeing Cody on Annick Vincent's web site made me want, briefly, to see about bringing him here to live with Callie. But then somebody (was it you, Tom?) said it's not a good idea to keep two pups from the same litter together. Why is that? Do they get too attached to each other? We plan to have Callie spayed in about a month's time, so there would be no danger of them having puppies.

And then having a second dog is not something we had ever really considered. It might be biting off more than we can chew. (Why does the chewing metaphor spring immediately to mind?)

Yesterday we learned that a friend of ours is looking for a new home for her puppy, a year-old shih-tzu & terrier cross who very much resembles the shih-tzu side of his family. Bentley is his name, and he is Callie's best dog friend. He's energetic and affectionate. 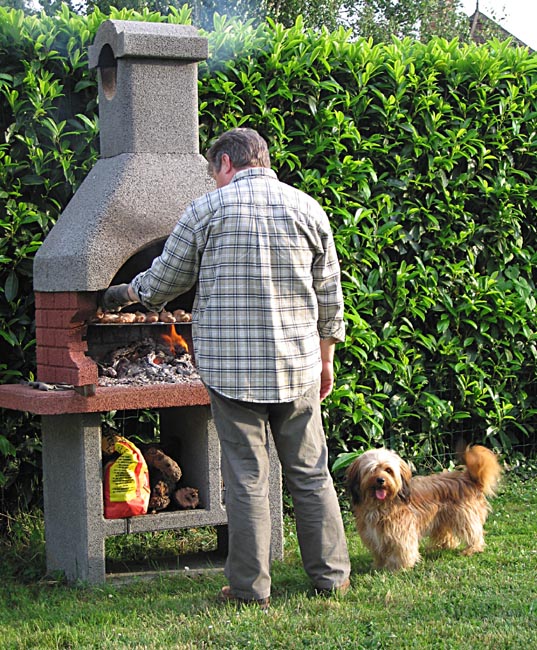 Bentley with Walt back in April
Our friend's personal and professional circumstances have changed radically since she adopted Bentley last year, and she now realizes she can't give him the attention he needs. If you or anybody you know would like to adopt Bentley, let me know and I'll put you in contact with our friend.
Posted by Ken Broadhurst at 07:55