We had a beautiful day in Saint-Aignan yesterday. The sun was out all day, with some small clouds going over. Walt went to the farmers' market to get some good melons (cantaloupes) for lunch and some other staples, including onions, mushrooms, lettuce, and poitrine fumée for lardons. I stayed home to watch the dog.

In the evening we had some people over for apéritifs. They are a Canadian family from Ottawa that I met through this blog. He is anglophone, and she is francophone. They both speak both languages, and their two sons also speak both languages. We sat at the table out in the garden and talked until about 8:00. It doesn't get dark until 10:30 or so here in July. 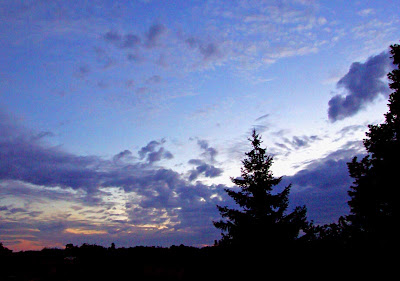 Last night's soft sunset
The Ottawans said that when they arrived in Saint-Aignan, where they are staying in a hotel, they found the town kind of spooky. Nothing was open, except the pizzeria and one other restaurant. The streets were dark and deserted — il n'y avait pas un chat, as they say — and there were bats swooping through the air just overhead. The bats must live in the big towers of the old church.

Of course, they had just spent 4 or 5 days in Paris, and I think Saint-Aignan was their first small-town experience on this trip. The contrast can certainly be striking.

When they got up Saturday morning to walk around the town, they were astonished to find the farmers' market set up and crowded with people. It was like a totally different place, they said, and I know what they mean. Except that the bats were still swooping around... Saint-Aignan, like most small towns in France, is not known for its nightlife. It's an early-morning kind of place.

OK, here's the weather report. Sun this morning, rain this afternoon. Here are the forecast maps. 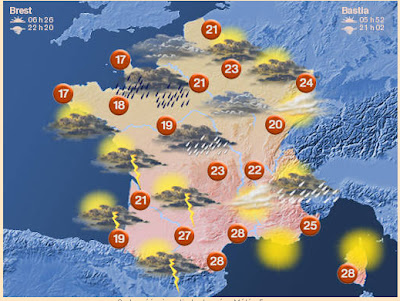 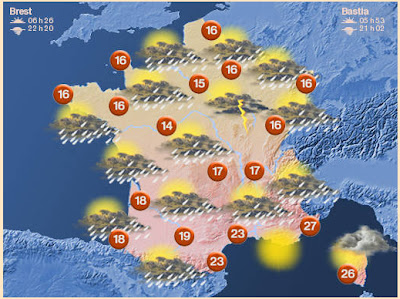