Yesterday a big mass of very warm air started moving over France from the southwest, coming off northern Africa and Spain. The clouds blew away to the north and the sun came out. The temperature rose sharply. 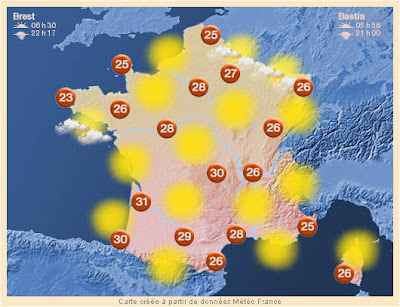 Saint-Aignan and Paris are expecting
afternoon temperatures of 28ºC/82ºF today.
The problem for me is that the strong southerly flow brings in loads of pollen — cypress tree pollen, if I can trust my sinuses and mucous membranes. I had a major hay fever attack yesterday, and it continues in a milder form this morning. Sniff, sniff.

Some years you just can't catch a break.

I went out with Callie and inspected the vegetable garden at six this morning. Walt did a lot of weeding out there yesterday. There actually are tomatoes on the vines. They aren't much bigger than a hen's egg, but at least they haven't rotted and fallen to the ground. These next three days of warm weather should make a world of difference. There is still a lot of weeding to do. 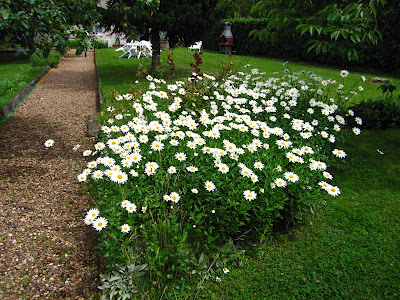 Today may be our first real day of summer.
I think we'll cook lunch on the grill today. Tomorrow is Bastille Day. This is the first big weekend for the « juillétistes » — the July vacationers who will leave Paris and other French cities today for a few weeks of fun and games out in the country and along the coasts. Les grandes vacances, too, are getting off to late start this year. Expect heavy traffic heading south.
Posted by Ken Broadhurst at 07:20