A year for fruit

The weather was cool and rainy all through May and June, and even into July. We still haven't had a stretch of really warm weather. The vegetable garden is a disaster zone, though it is just starting to look a little better now, since we've had a few sunny days.

There are big yellow flowers on the zucchini and summer squash plants (courgettes vertes et jaunes). There are some small green tomatoes now, and some green bell peppers too. The eggplants and green beans have blossoms — Walt actually picked a few haricots verts yesterday. 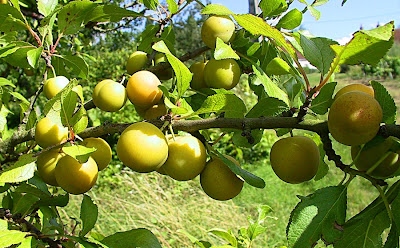 It's a great year for mirabelle plums in the Cher Valley.
While it's not a great year for the jardin potager, it looks like we are having a fantastic year for fruit. I blogged in June about the local cherries, with many pictures of the ones we picked on our property and on untended land nearby. We enjoyed cherry clafoutis and duck with cherry sauce, and I made several jars of confiture de cerises.

A few weeks ago, I picked a big batch of little red plums over in my neighbors' yard. They didn't mind, especially since 95% of the plums I gathered were ones I picked up off the ground. I hardly touched the tree. A couple of weeks later, my neighbors' brother-in-law came over from Noyers-sur-Cher, across the river where he lives, and picked a lot more plums. I saw him that day. And then the neighbors told us he made 15 jars of preserves with the plums he picked. 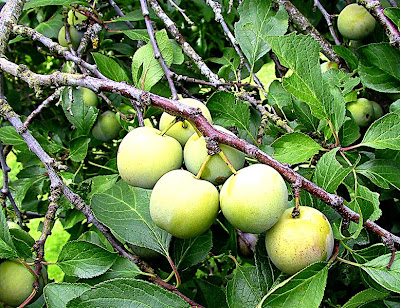 I can't tell if these are exactly the same variety as
the mirabelles pictured above, but they are good.
Now the little rosy-tinged yellow plums called mirabelles are ripening. For the first time since we came here — this is our fifth summer already — the plum trees out in our back yard are covered in fruit. This is also the first year we've had enough plump cherries from our own cherry tree to be able to do anything with them.

I don't know whether to attribute the sudden increase in the productivity of our fruit trees to the mild winter we had or to the great amount of rain that has fallen since May 1. Maybe it was just too dry for the trees to set fruit in 2003-06. Or for the fruit to plump up.

There is obviously a balance in nature. For three years, we had a sumptuous harvest of vegetables from the garden. This year, the garden is producing less, but the fruit harvest is exceptionally nice. 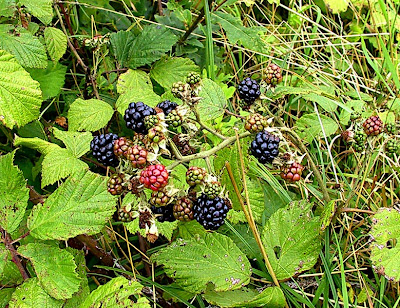 It looks like it's going to be a good year for blackberries too.
Whatever the cause, we picked and picked up about 2.5 kg (6 lbs.) of plums earlier this week in our own yard, and there are two trees on the untended land next to ours that are heavy with little yellow plums. I just went out and tasted a couple — they seem to be a slightly different variety from the mirabelles we have (they are rounder and yellower) and they aren't quite ripe yet. They're sweet enough to eat, but they will be better by mid-week.

I can wait, since I just picked another kilo or so off our own trees and the ground under them. 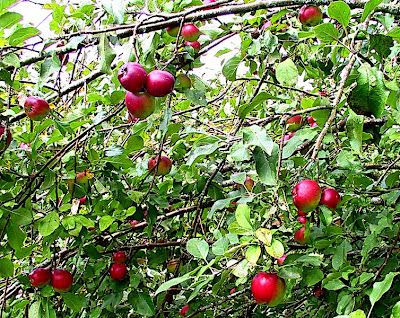 Pommes rouges...
The other fruits we are going to have this year, in abundance, are apples and blackberries. This is an "on" year for our biggest green apple tree, so there are literally thousands of apples on it. We will have to discard most of them because we just can't use them all. Another of our apple trees is covered in bright red apples, and we will try to use as many of those as possible. 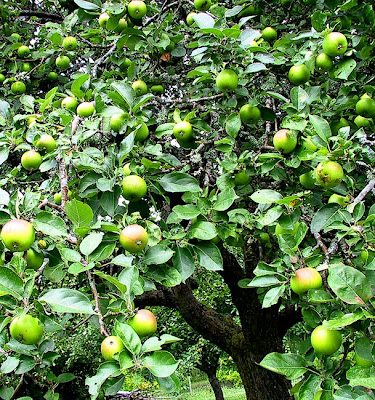 ...et beaucoup de pommes vertes
Out in the vineyard and along both the gravel and paved roads out back, there are numerous blackberry brambles. One summer, a few years a go, I picked some blackberries and we made a pie. This year, from the looks of things, there will be many more blackberries than ever before (since 2003, anyway). I foresee blackberry pies and blackberry jelly in August.
Posted by Ken Broadhurst at 10:00