First, today's weather map for France. Saint-Aignan is approximately at the location of the red circle with a 16 in it, a good distance inland from the Atlantic coast and near the center of the country. Paris is the 19 circle just northeast of us. 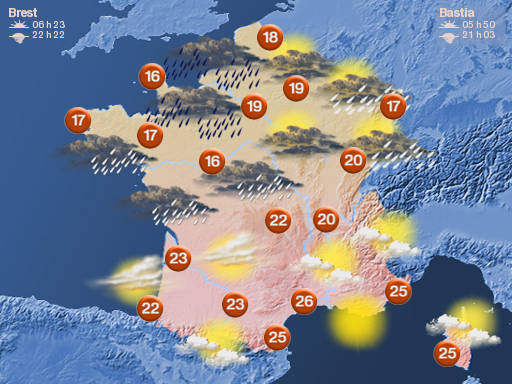 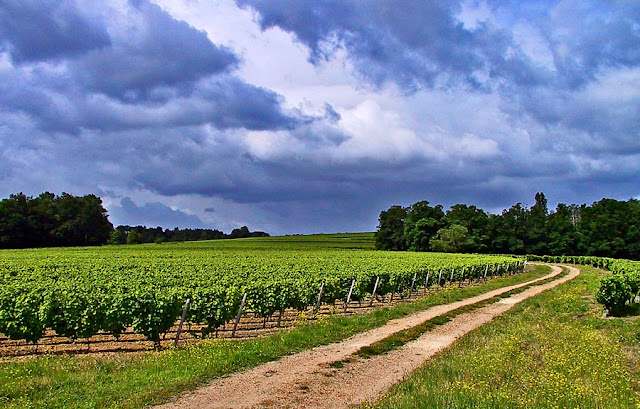 Walt just told me that extended forecasts show us with a high temperature of just 14ºC (57ºF) a week from now, on Bastille Day. So far this season, the resorts along the Atlantic coast are deserted, when they should be full of beach-goers. It's just too windy, chilly, and damp out there. Everybody is talking about how we aren't going to have any summer at all this year. And to add injury to insult, there are bad forest fires down along the Mediterranean.

Between Monday June 25 and Tuesday July 3, Callie gained a full kilo — that's more than two pounds, representing a 20% gain. She now weighs 9.5 kg, or about 21 lbs.

Our previous dog, Collette, weighed between 16 and 18 kilogrammes (35 to 40 lbs.) all of her adult life. We don't know how much Callie will weigh when she gets to be full-grown. But with those long back legs and her general lankiness, I think she still has a lot of growing to do. 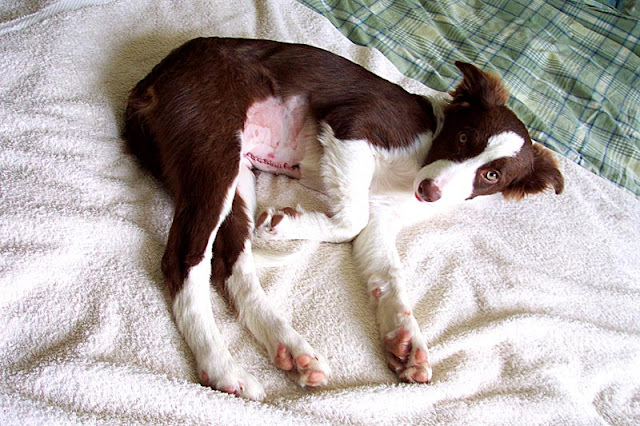 Want to see my scar?

The stitches from the operation came out on July 3. The vet who removed them said she appears to be doing great. It turns out her ailment could probably have been treated with antibiotics instead of surgery, but they didn't know that until they cut her open and saw what the problem was.

Yesterday morning when I took her out at six o'clock, we walked around the yard and then we started playing ball, with me throwing a tennis ball and Callie more or less bringing it back to me (with some coaxing).

There was a big full moon up in the dusky morning sky. At some point, Callie looked up and saw that moon. It spooked her. She put her tail between her legs and headed for the back door, where she waited for me to come and let her back in the house. I tried to call her back for more play but she was too spooked. 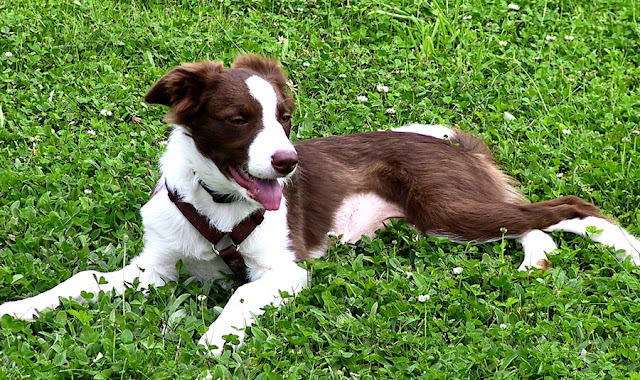 That big old moon spooks me out.

A couple of days earlier the same thing had happened, but that day I didn't realize what it was that was scaring her. It was the moon. I suppose it's not surprising, since wolves and some dogs are known to bay at the full moon when they see it.

I just looked up the verb "to bay" — meaning to bark or howl — in English and found out that it is related to the French verbs aboyer — to bark — and bâiller — to yawn. Aboyer was also spelled abaier until the 17th century. 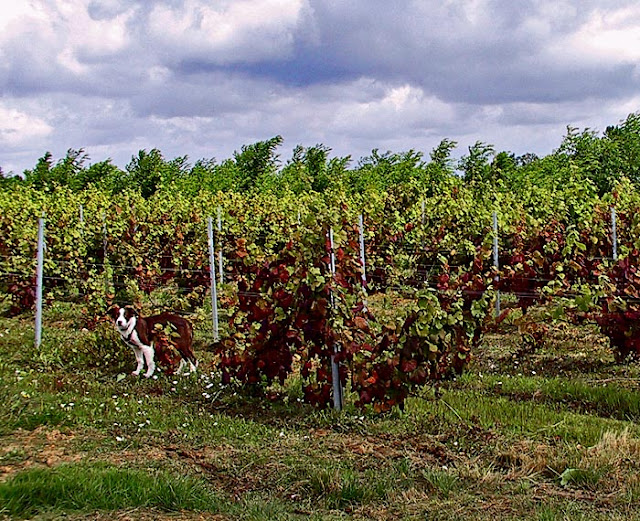 Callie in the vineyard on a windy July 4

And it's also related to the French adjective béant, which means "gaping" or "yawning." There's a similar word in the expression être, rester bouche bée — être, rester la bouche ouverte d'admiration, d'étonnement, de stupeur. In English, you might say that when you saw something that astonished you, "your jaw dropped."

I wondered where the expression "to bay at the moon" came from. Now I have a better idea. Baying is a kind of howling, open-mouthed bark.
Posted by Ken Broadhurst at 07:47