Weather bulletin: It's raining again this morning. Now that's out of the way...

I finally got my QWERTY keyboard. What a long wait! I ordered it on June 7. If I had thought it was going to take so long for the local computer store to get it from a supplier, I would just have ordered one from U.K. Amazon. I would have received it a lot sooner.

The French keyboard is called an AZERTY model. The Q and A keys are reversed compared to a U.S. keyboard, as are the W and Z. A lot of other keys, especially keys for punctuation marks and other useful symbols, are in different places too. 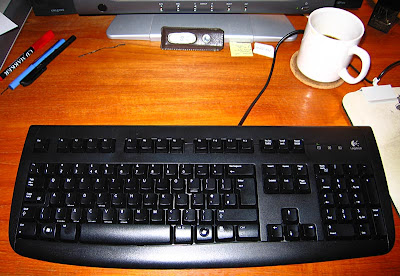 The British keyboard now on my desk
Only if you've ever tried to use a French or other non-QWERTY keyboard to type text — e-mails in an Internet café in Paris, for example — will you understand what a big issue this is.

In a way, it all turned out fine despite the much longer than expected wait. One feature of the French keyboard that was giving me a fit was its small Shift key on the left side and the extra key stuck in between the Shift and the Z compared to a U.S. keyboard. That key is the backslash, so every time I wanted to type a capital letter that involved a letter key on the right side of the keyboard, the little finger on my left hand would press what it thought was the Shift key and I would see this on the screen: \\\\\\\\\\\\\\\\\\p

While I waited nearly a month for my QWERTY keyboard, I finally got used to the smaller Shift key. I decided late last week that I didn't really even need a QWERTY keyboard.

I returned to the computer store yesterday (Monday). Actually, my purpose in going there was to tell them that I didn't want the QWERTY keyboard any more. Partly, I was just peeved that it was taking so long. I had found une autre solution, I told the clerk. That's when he said the QWERTY keyboard had come in last Friday.

Despite the fact that I was in the store three times the week before to ask about the delivery date and was told each time that I would get a phone call as soon as my keyboard came in, nobody had called me. The store is open on Saturdays, so it's not like maybe it came in so late on Friday that there was no point in calling me until Monday. I didn't miss the call either — there was just no call to miss.

I asked if I could see the QWERTY keyboard anyway. I was hesitating. What if it turned out to be a nice U.S. model?

It turned out to be British. And the British keyboard has that same tiny Shift key on the left side. Of course, as I said, I'm used to that now.

When I initially ordered the keyboard, I was told it would cost about 20 euros. When I said I wanted it to be black, not beige, the clerk said that "feature" would cost extra. Last week, I priced the keyboards at the SuperU hypermarket in Contres, and they were in the 20- to 50-euro range.

So yesterday, I expected to hear that the selling price of this British keyboard would be 25, 30, or even 40 euros. It is a specialty item in France, remember. And it is black, after all, and thus rare.

I looked at the keyboard and saw that it was a Logitech model. I explained to the clerk the differences between the layout of a British keyboard compared to an American one. His eyes glazed over (as yours surely have by now). I was hesitating about going ahead and paying for it at that point. It all depended on the price.

So I asked. It's eleven euros, he told me. I expected him to quote a much higher price for such a nice black Logitech keyboard. At the low price he did quote, I couldn't say no. So now I have a nice new British keyboard. Of course, it says "Made in China" in small print on the back. 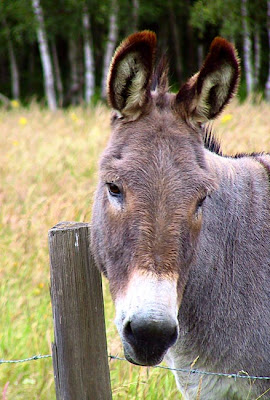 The jackass that lives out back
If you have read this far down in this boring post, you've gotten to the part where I tell you the lesson I've learned. Which is: Adapt. Go local. Go native, as the British so charmingly and pejoratively say. I already had a French keyboard, and the hypermarket shelves are full of them. I had made progress in getting used to using it. And it's no problem to buy one locally, even if they are expensive.

If you want something that is specifically British or American, order it from the U.K. or the U.S. If — and this is a big IF — you can find a company that will ship it to France, that is. Or do without. Imagine how hard it would be to get a French keyboard in the U.S., especially if you lived way out in the country somewhere.

These are the little things that take up a lot of your time and mental energy as an expatriate.
Posted by Ken Broadhurst at 07:56