Josette is the woman we bought our house from. She turned 80 in June and decided to organize a birthday dinner in a restaurant for herself and a group of friends. Walt and I were included. That's how birthdays are celebrated in France — the person having the birthday throws the party.

The invitation says: ‘‘The play has been playing for 80 years now,
and Josette is still the star. She's on stage again July 8, 2006,
at the Mange-Grenouilles restaurant in Saint-Aignan.
The show starts at 12:30 and you are invited.’’
We were 14 guests. The birthday celebration was lunch at the relatively new restaurant in Saint-Aignan called the Mange-Grenouille, the Frog Eater. That's a funny name for a nice restaurant that is decorated with vrai-faux antiques and where the food is good. We didn't eat frogs' legs, however.

Walt has pictures of Josette and others at the party on his blog today.

Josette and her daugher, son-in-law, and granddaughter drove to Saint-Aignan from Tours for the occasion. J. moved to Tours to live closer to her family a couple of years ago, selling both her house (the one we now own) and her apartment in Saint-Aignan. She and her husband used to live nine months out of the year in the apartment in downtown Saint-Aignan, spending just the summer months in the house in the country where we now live, until the husband passed away about six years ago. 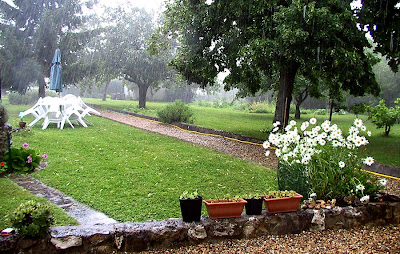 Can you see the rain pouring down in this photo?
If you click on it to enlarge it you can.
The other people at the party were our summer neighbors from across the street, who live in Blois most of the year. Josette introduced us to Maryvonne and Bernard, a couple in their mid-70s, when we first arrived here four years ago. Also present were Annick and Jean-Michel, neighbors of ours who are about my age and who live just two houses down from us year-round.

The other attendees were people I knew less well or not at all. Marie-France and Didier are a couple of 50-year-olds that I'd only met them briefly once before, when we all helped Josette move some of her precious and fragile belongings from her Saint-Aignan apartment over to her new place in Tours. There was also an older woman named Jeanine who was introduced as an ancienne viticultrice (a retired wine-maker) and who seemed to be good friends with Annick and Jean-Michel as well as with Josette. Finally, there was a younger woman named Aline, about whom I learned nothing.

There were gifts for Josette, including a couple of pieces of jewelry, a china tea cup and saucer, a hot-pink silk scarf, and some nice perfumed soaps. She gave a little speech, which was very short, and she and the rest of us joked about that. "A lot of us celebrated my 60th and 70th birthdays together, and now here we are for the 80th. Maybe I'd better have this party every year from now on rather that wait for my 90th to do it again," she said.

One of the gifts was a pair of earrings. The person who gave them said they were for pierced ears but could be exchanged if Josette's ears weren't pierced. They weren't. We joked that at 80 she's now old enough to have her ears pierced if she wants to. 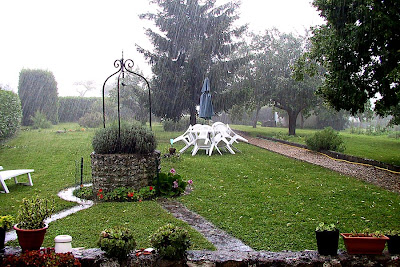 The back yard during a hard downpour yesterday afternoon
People were slightly dressed up for the party, though Bernard was the only man with a tie on. A couple of others had worn jackets but took them off before lunch started, since it was warm in the restaurant. The women were mostly in skirts or capri pants with summery tops and little jackets.

It is really nice of these people to include us in their parties and other events. The two funny American guys who live in Josette's old country house... They must wonder what we are doing here, what would have possessed us to buy a house out in the French countryside and live hear 12 months a year. I don't think any of them has ever even been to the United States, and none of them speaks more than a couple of words of English, to my knowledge.

The conversation was a lot of gossip about local Saint-Aignan people and events. I tried to follow along. From Annick and Jean-Michel, I got recommendations about contractors — we need a reliable, skilled electrician to do some work in our kitchen, after we find a reliable, skilled roofer to fix the problem with the leaky roof. Our neighbors gave us names for both.

Bernard told hunting stories, and there was a lot of conversation about the local roe deer (chevreuil) population. We all see them grazing in our yards — well, not ours because it is fenced off — and out in the vineyard. There was talk about the rainy weather and about how much spraying of fungicides the grape-growers have been doing to keep their vines healthy and ensure a good harvest in September. Maryvonne talked about some of her grandchildren getting their bac in June, avec mention — with honors. That's the high-school diploma but a much bigger deal than in the U.S. She was proud of them.

There was talk about some local characters we of course don't know, and about dearly departed neighbors who were either such nice people or who behaved so strangely. Josette brought out a couple of photo albums at the end of the meal, showing us pictures of her 60th and 70th birthday celebrations. It was interesting to see pictures of people when they were 10 or 20 years younger and imagine what their lives have been like.

The food was good and was typical of Saint-Aignan. It was served banquet-style — no menus and no choices. There was an aperitif of local bubbly wine. The first course was a salad plate with some cooked chicken livers, a slice of foie gras on toast, and a couple of slices of smoked duck breast. It was served with a local vendanges tardives or late harvest white wine, a moelleux or sweet wine that is what you drink with foie gras.

The main course was a seafood brochette with scallops and shrimp cooked in a slightly tomato-y sauce with some mushrooms, zucchini slices, and a little pile of pasta. It was delicious. To accompany it, there was a red wine from Saumur-Champigny, a wine area over on the other side of Tours, near Saumur (comme le nom de l'appelation l'indique).

The red wine was much heavier and thicker than the light, very drinkable wines produced around Saint-Aignan. Saumur-Champigny reds, like the nearby Chinon and Bourgueil wines, are made from Cabernet Franc grapes, whereas most of our local wines are made from Gamay grapes.

Somehow the subject of drinking watered-down wine came up. Some said a lot of people used to do that when the wines weren't as good as they are nowadays. Others said people still cut their wine with water, and said it wasn't very good that way. The retired wine-maker pointed out, however, that mixing it with wine definitely improves the taste of the water! 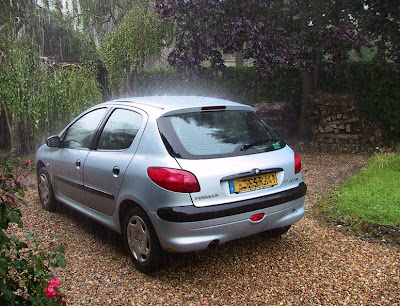 Rain beating down on the Peugeot in the driveway.
After the main course, the restaurant served us a cheese and salad plate, with three pieces of local goat cheese and a small pile of lettuce leaves dressed with vinaigrette.

Dessert was a plate on which there was a small piece of raspberry clafoutis, served warm, with a scoop of nougat ice cream sitting in a pool of raspberry coulis or sauce. There was also a little glass of mousse au chocolat on the plate, and the mousse contained some crumbled praliné or caramel that gave it a crunchy texture. I thought all three components of the dessert were delicious. With dessert we were served a glass of sparkling Vouvray wine, which is made locally using the Champagne method and Chenin Blanc grapes.

After the meal, Annick and Jean-Michel invited everybody to come over to their house for a second dessert. They served cannelés, a little sweet cake that is a Bordeaux specialty, and some macarons, along with bubbly water or fruit juice. We all sat outside for a few minutes but then it started to rain. At that point, we moved everything — chairs, table, glasses, bottles, and dessert trays — and ourselves into Jean-Michel's brand-spanking-new garage/workshop.

As soon as we got settled inside, the rain stopped and the sun came back out. We stayed inside. After an hour or so, the party broke up. Josette and her family left to drive back to Tours, and Maryvonne and Bernard left for their drive back to Blois. Walt and I walked home. Big dark clouds were coming in from the west, and a couple of minutes after we got home there was thunder, lightning, and very heavy rain for about half an hour.
Posted by Ken Broadhurst at 06:46