Airing out and cooling down

I woke up at 5:15 this morning. The air in the house was still and stale. I started the day by opening all the windows as wide as possible.

Opening up the house very early in the morning is what I learned to do during the great canicule of 2003. People told me that's how they survived. 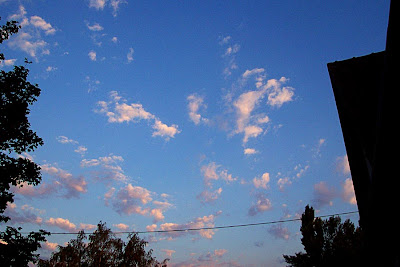 The sky last night at sunset. It was Bastille Day
and the noise of local fireworks displays upset the dog.
That year's heat wave lasted for weeks and weeks, so by the end even opening up the house in the relatively cool early morning hours didn't do much good. The temperature in our house would be over 85º a lot of mornings. That's why that summer was such a disaster for France, and why so many older people died. There was no way to cool down.

The house was at a muggy 25ºC — that's getting close to 80º — when I got up a few minutes ago, and the outside temperature is 20º or 68º. Houses built since the 1950s here, like ours, heat up really quickly when the sun beats down on hot afternoons. 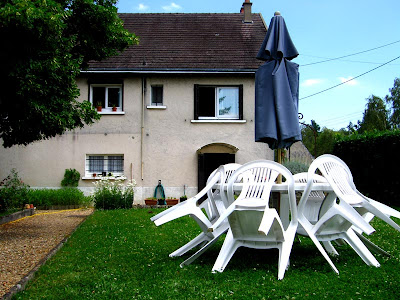 Yesterday afternoon out in the back yard
The fact is, there was a slight mist in the air this morning and the clouds were thick and dark when I took Callie out at 5:20. Rain showers are supposed to move in today and tomorrow. I just looked outside and the car is covered with raindrops. Now I'm hearing thunder.

I'll be leaving for Paris in the Peugeot in a couple of hours. My AC is working so I should have a nice day.
Posted by Ken Broadhurst at 05:44