Today I'm posting some pictures of my walk with Callie in the vineyard late yesterday afternoon. As you can see, the weather is good. It's not too hot, but the sun is nice. 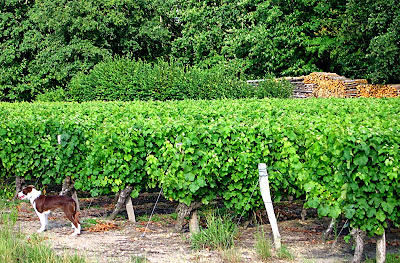 Callie at the edge of some nicely groomed vines,
with the woodpile in background
There's a huge pile of stacked wood out in the vineyards. I'm not sure who it belongs to. 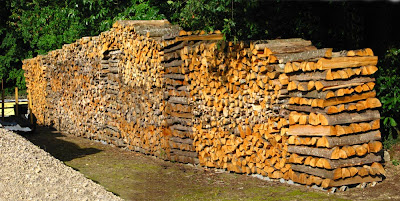 The woodpile out in the vineyard
Maybe the owners heat their house exclusively with wood. A lot of people here do. In our case, we have an oil-fired boiler and steam radiators throughout the house, but we depend more and more on the wood-burning stove we had installed over a year ago. It's a lot more economical, given the price of oil and the expensive euro these days. 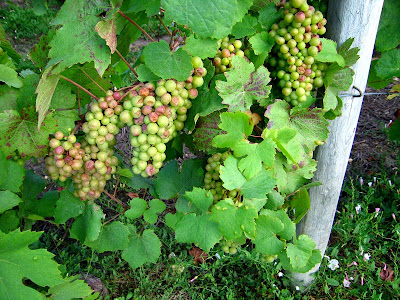 The grapes are not looking so good this season.
The constant rain combined with fairly warm temperatures in June has been disastrous for grape-growers this year, especially down in Bordeaux. They say the harvest may be small. That in itself is not a bad thing, especially if the rest of the season is warm and sunny, because a small amount of good wine is better than a large amount of mediocre wine.

Warm, humid conditions encourage the growth of mold and mildew on the leaves and the grapes in the vineyards. Those are the weather conditions we've had, and it has been worse south of us, apparently. There are reports of some growers just giving up on the 2007 crop. 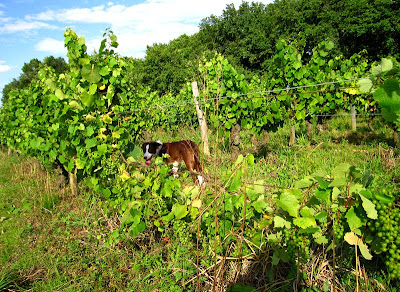 Callie standing among some vines that haven't been so well tended
Bruno has been spraying his vines out back almost daily for weeks now. I assume he's spraying what is called the Bordeaux Mixture, a solution containing copper that is a fungicide. But I haven't talked to him about it. He's been too busy. 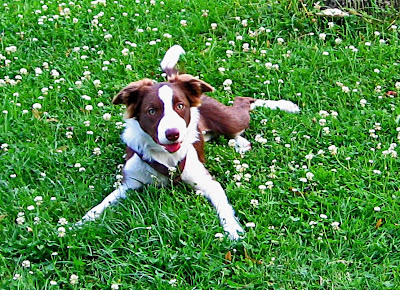 Mademoiselle Callie resting after her romp in the vines yesterday
Just to remind you that wine here is not a luxury item but a staple of the diet and the local economy, yesterday I bought 30 liters of wine — 10 liters each of Gamay, Rosé, and Sauvignon Blanc — for 29.80 euros. Ten liters is 13 bottles. So that's about a dollar a bottle. And these are good, drinkable wines.

There is a wine surplus in France, but a small 2007 grape harvest may mean that the surplus will decline significantly.
Posted by Ken Broadhurst at 07:56