I've been listening to the radio this morning. It seems the people who run hotels, cafés, and restaurants along the French coast are feeling pretty down in the mouth. The weather is chilly, windy, and rainy, and tourists are staying away. The weather would be normal if this were late October, but it is just weird for early July.

Hotel occupancy rates are running along at levels usually seen in February, the radio report said. The high temperature yesterday in one of the northern beach resorts was 14ºC/57ºF. Brrrr. Sounds like a typical summer day on Ocean Beach in San Francisco.

Faire grise mine literally means to put on a gray face. The French-English dictionary gives "pull a long face" as a translation. I'd say it's to be or look down in the mouth. Sad. Depressed. Worried. Not happy. 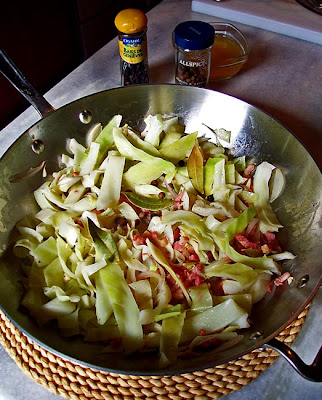 Cabbage with bacon, bay leaves, and allspice
and juniper berries, cooking in white wine
Meanwhile, we had a sunny afternoon yesterday, after a morning of misty rain. Today is supposed to be fairly nice, but rain returns tomorrow.

I cooked duck with cabbage yesterday. It was very simple. First you brown a couple of duck leg & thigh pieces in a pan. Take the duck out and pour off some of the fat. In the remaining duck fat, sauté three slices of bacon (lardons) and a chopped onion or shallot. When that's cooked but not too browned, put in four cups of shredded fresh cabbage. Add a cup of white wine and let it cook for ten minutes.

Then add six allspice berries, six juniper berries, and three small bay leaves to the pan, along with some ground black pepper. Lay the browned duck pieces over the top, cover the pan, and let it simmer on low heat for an hour. Then add some potatoes to the pan and let it cook for another half hour, or until the potatoes are cooked through. 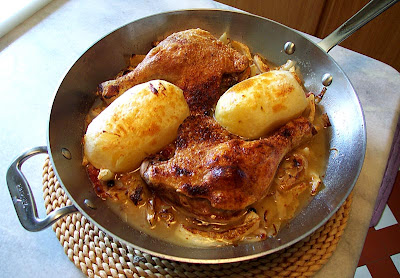 Duck and potatoes cooked on a bed of cabbage,
and then browned under the broiler
To make it more presentable, set the pan under a hot broiler for five minutes before serving and let it turn golden brown on top. Watch it carefully at this stage.