When I lived in Paris back in the 1970s and early 1980s, I really enjoyed the standard fare served in little restaurants all over the city, where a student could eat without breaking his budget. The salads and other dishes served as an entrée or starter course — salade de betteraves (beets), salade de tomates (tomatoes), céleri-rémoulade (celery root), salade de concombres (cucumbers), carottes râpées (grated carrots), œufs durs à la mayonnaise (hard-boiled eggs), and of course good pâtés and terrines — were an important and delicious part of the meal.

I learned to appreciate the individual food products — tomatoes, carrots, and beets weren't just an accompaniment for other foods, or one item in a big mixed salad, but were delicious in their own right, interesting in taste and texture. And I learned that a good vinaigrette dressing — mustard, vinegar, oil, salt, and pepper whipped into an emulsion — complemented all these vegetables. It is a dressing you never get tired of.

One of the hors-d'œuvres I had never imagined or heard of before going to Paris was something called champignons à la grecque — "greeked" or Greek-style mushrooms. Every little restaurant served them — if not every day, very regularly. They are button mushrooms (champignons de Paris) cooked with white wine, onions or garlic, lemon, coriander seeds and herbs, and just a touch of tomato paste, and then served cold as a salad. 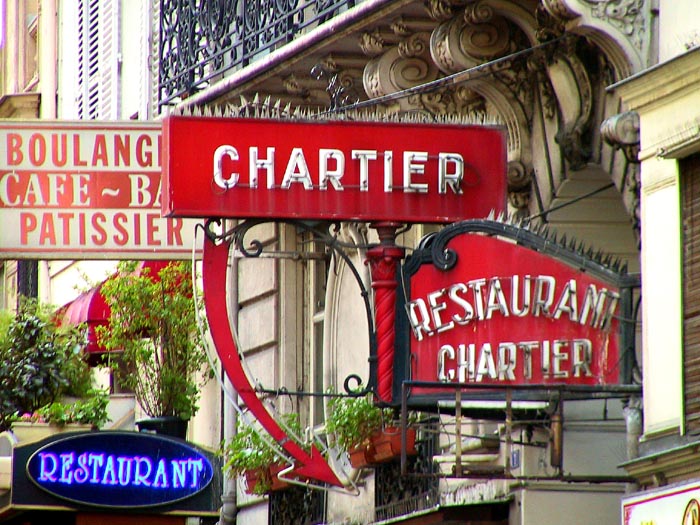 The Restaurant Chartier is worth a stop for the
atmosphere, but don't expect gourmet food.
One of the restaurants I remember the best was called the Restaurant Saint-Michel on the Boulevard Saint-Michel in the Latin Quarter. You could have lunch there in the early 1970s for five French francs, which was less than a dollar in U.S. money. For that price you got an appetizer, a main course, cheese, dessert, and a small carafe (25 cl) of wine. Coffee (an espresso) was extra, I think, and probably cost a franc (20¢). Those were the days. The Restaurant Saint-Michel no longer exists. Places like Chartier serve the same kind of inexpensive food today in Paris, but at slightly higher prices of course.

Similarly, in Durham, North Carolina, where I was a student at that same time, you could have lunch or even dinner in many local restaurants for $1.00, and the food was good. The group of students I lived in the dorms with would make the rounds of restaurants in Durham and Chapel Hill every week, hitting the specials: $1.00 for dinner at the Little Acorn one night, $1.00 for all the spaghetti and meatballs you could eat at Mario's another night, fried fish and French fries at Howard Johnson's another night for about the same price. But those meals didn't come with nice appetizers, a carafe of wine, or an espresso.

Anyway, nowadays I have to make my own champignons à la grecque. I don't get to Paris that often, and I've never seen them in the restaurants around Saint-Aignan. I have two recipes, one from the classic cookbook called Je sais cuisiner by Ginette Mathiot, and the other in a little paperback that is one of my favorite French cookbooks, Cuisine pour toute l'année by Monique Maine. 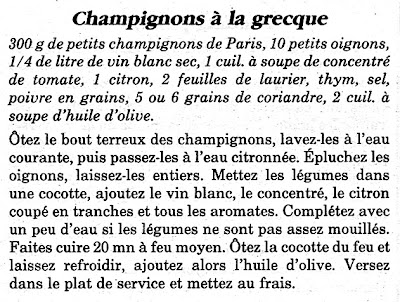 ...and Monique Maine's recipe for the same dish
My own recipe is a combination of the two. I like to cook the mushrooms in white wine with the aromatics, let them cool, and then stir in a little bit of good olive oil at the last minute. Mme Mathiot says to cook the champignons first in the olive oil, but to me it's a shame to burn up good oil that way. Mme Maine adds peeled pearl onions to her dish, but those really are optional in my opinion (and a lot of trouble to do). 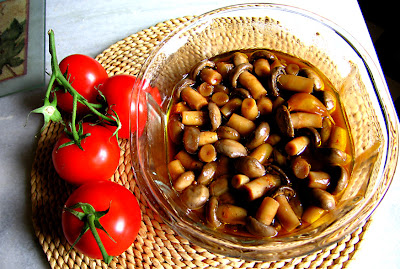 Champignons à la grecque, sans the lemon slices and bay leaves
For a pound of mushrooms, I use a dozen coriander seeds, a good pinch of thyme (or a fresh branch), two bay leaves, six pepper corns or some ground pepper, a tablespoon of tomato paste, and a whole lemon cut into slices (pits removed). Sometimes I add a couple of whole, unpeeled garlic cloves or a little onion for flavor. I pour on a glass of dry white wine and set the pan on medium heat for 20 to 30 minutes. When the mushrooms and lemon are cooked, I take the pan off the heat and let the mushrooms cool in the sauce. Then I can remove the lemon slices and bay leaves (and thyme branch if you used fresh thyme, garlic, or onion). Then I taste for and add salt.

Serve the mushrooms cold. They are good to eat on picks as an hors-d'œuvre with a glass of wine, or on a plate with a knife and fork as an appetizer salad.
Posted by Ken Broadhurst at 07:06