More of the same

I woke up this morning to the pong! pong! sound of water dripping on the plexiglass awning over our back door, just below the bedroom window. You know what that means.

I took Callie out into a fine mist. It wasn't chilly though, or at least not as chilly as it looked through the bathroom window. The mist stopped during the 10 minutes or so I was outside. It has started again, however. 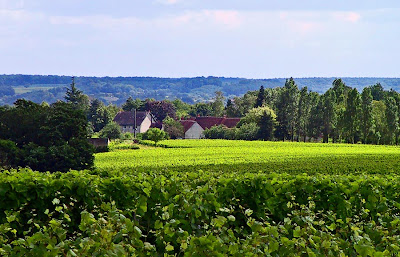 On July 4 we had some sun between showers.
This is a view of our hamlet from out in the vineyard.
On yesterday's news there was a report about how slugs and snails have turned into major pests because of the rains we're getting almost daily. They showed one farmer examining his lettuce crop and finding several slugs and snails in each plant. Some of the heads of lettuce had been almost entirely devoured by the little mollusks.

I guess we should start harvesting, purging, and cooking escargots here in Saint-Aignan. 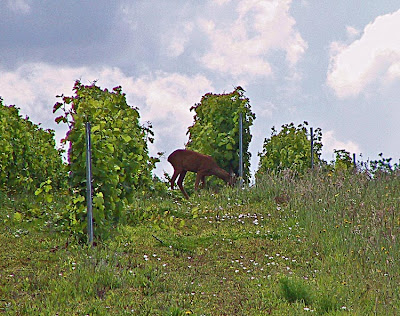 I saw this deer grazing among the grape vines on July 4.
As I was typing this, I heard something hit the sliding glass door on our little front porch (we used to call it a sunporch!). At first I thought it was a bird crashing into the glass, but it was a sharper sound than that. Birds have smashed into it before.

I went and looked and it was a big snail that had fallen from somewhere. I guess it's sticky foot couldn't stay attached to glass. I heard it when it hit the metal track that the door slides on.

Even the snails are coming indoors to escape the damp. 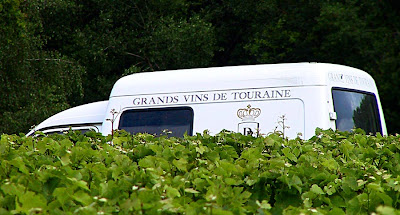 The crew from the Domaine de la Renaudie winery are out
in the vineyard a lot these days, with their little white van.
Since it's fine weather for ducks, I'm going to cook some duck today. With cabbage and potatoes. It's not exactly summer food, but this isn't exactly summer weather.
Posted by Ken Broadhurst at 06:55