This post is for Mimi. And Jerry. Mimi will know why. I don't know if they read my blog these days, but I hope they do. 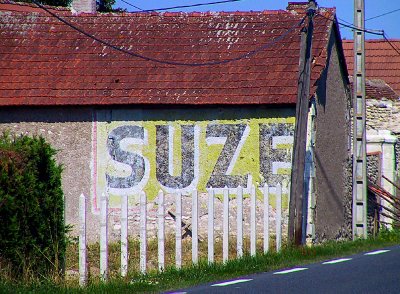 Ghost ad for the apéritif wine called Suze
On the main highway that leads east from the Saint-Aignan area over to Romorantin and Vierzon, there's this old wall ad for Suze. Suze is a before-dinner drink, an appetite stimulant supposedly, that is made from the gentian plant. Before-dinner drinks are called apéritifs.

gen·tian n. 1. Any of numerous plants of the genus Gentiana, characteristically having showy, variously colored flowers. 2. The dried rhizome and roots of a yellow-flowered European gentian, G. lutea, sometimes used as a tonic. 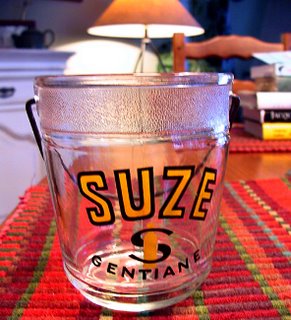 A Suze ice bucket that I bought in Laon in 1994
According to the official Suze web site, Suze-style gentiane drinks were made as early as 1795, but it was in 1889, the centennial of the French Revolution, when the name Suze was created. That same year, the Eiffel Tower opened to the public. 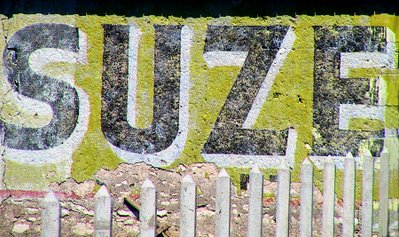 Correction and addendum to yesterday's post about the house across from us at La Renaudière. It is not being sold. The son and daughter of Mme Simonnet are having it appraised for other reasons. I imagine they will inherit it 50/50 and they want to know the value in case one of them wants to buy the other's stake in the place.
Posted by Ken Broadhurst at 18:05