If you read Walt's "Another American in France" blog, you know yesterday was his birthday. This was the 25th birthday of his that we have celebrated together. C'est incroyable, non ?

In the fall of 1982, we were living in Washington DC. Well, Arlington, Virginia, actually. We didn't live together then. We had met in Paris in 1981 and become friends. Walt was working for BlueCross/BlueShield in Washington as a phone rep, and I was still looking for a job as a translator.

When Walt's birthday rolled around in December, he told me that he had had the most amazing dinner on his birthday the year before in France. He was in Nice, and in a restaurant he ordered a steak au poivre avec frites. It was the best thing he had ever eaten, he said. 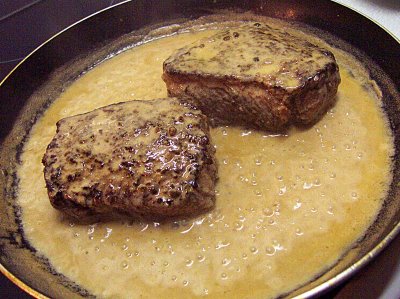 Big thick steaks warming up in the bubbly cream sauce
"I can make that," I told him, "if you want to have it for your birthday dinner again this year."

I don't think he believed me. But it was a meal I had been preparing for the past three years, during the time I lived in Paris and cooked a lot of dinners for a group of French friends. Everybody loved it. Sometimes I made it with bifteck haché — ground beef — because it was always good and was less expensive. And I always served it with sautéed potatoes, since making french fries in my small apartment in Paris was not an option.

Obviously, my version of steak au poivre has legs. Twenty-five years later, we still enjoy it, but only once a year. Maybe this year I'll make it more often. 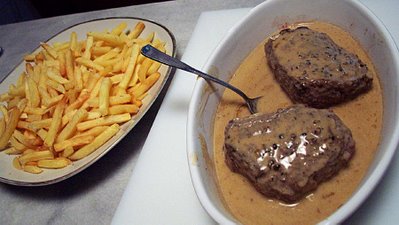 We have a deep fryer (thanks, Cheryl) so now we can make
"proper" frites to go with the steak au poivre.
How do you make it? Rub coarsely ground black pepper or chopped green peppercorns on thick steaks and let them "marinate" in the pepper for 30 minutes to an hour. Then sear the steaks in a hot skillet. Take them out of the pan and deglaze with cognac or armagnac (¼ to ½ cup, I'd say). Let that boil down for two or three minutes, scraping up the pepper and meat juices, and then put in enough cream (French crème fraîche is best of course) to make a nice sauce. Add some salt at various points in the process.

When the cream sauce has cooked down for two or three minutes, put the steaks back in and turn them over to coat them in sauce. Let them heat back up and cook a little to get them the way you like them: rare or medium or whatever.

Serve with french fries or sautéed potatoes and a green salad.

P.S. I bet this would be good made with big thick tuna steaks. Now there's an idea...
Posted by Ken Broadhurst at 09:43