I guess that's my, or the, word of the day: tempête. Tempest. The Robert dictionary describes it as a violente perturbation atmosphérique. We've been warned. Don't go out today unless you really have to. Take all standard precautions against high winds. Expect heavy rain.

Météo France, the French national weather service, is telling us that we will have winds of 60 or even 70 miles per hour — that's 100 to 110 kilometers per hour — this afternoon. Here's the wind forcast map for 1:00 p.m. today. The figures in white are sustained winds; the numbers in red are gusts. Saint-Aignan is right under the arrow pointing to 65(100). 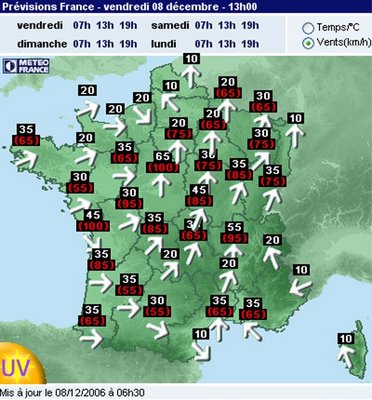 Vents violents prévus pour cet après-midi
In December 1999 there was a very violent tempête in France that felled millions of trees all across the country, including most of the centuries-old trees on the grounds of the Palais de Versailles, near Paris. I remember traveling to Paris a few weeks after that storm and seeing broken-off tree trunks along the streets in Paris itself. 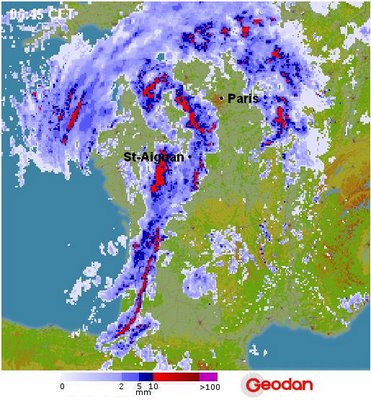 The radar image for France taken about an hour ago
People are afraid that might happen again. I think there is widespread feeling in France that the weather is really détraqué — crazy — this days. There was the 1999 storm, a very unusual occurrence. And then the heat wave of 2003, when thousands died of exhaustion and dehydration. August 2004 was the rainiest August in nearly 50 years. August 2006 was the coldest August in more than 50 years. Now the autumn of 2006 is the warmest autumn in recorded weather history. And on and on.

Are we humans responsible for rapid changes in long-standing weather patterns? Or are these normal weather cycles? Time will tell, I guess. 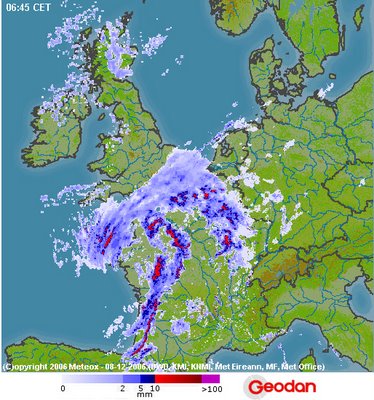 The European radar at 6:45 a.m. on 08 December 2006
I grew up on the coast of North Carolina in the 1950s and 1960s. In the 1950s we had a series of devastating hurricanes. Hurricane Hazel was the worst, but there were several others — Connie, Diane ... if I remember the names correctly. Frequent hurricanes made for a very exciting childhood.

Then there was Hurricane Donna in 1960, which caused great damage in and around my home town. At that point, the hurricanes stopped coming. For 25 or 30 years there weren't any more. They started up again, in earnest, the 1990s. Now why did that happen? Nobody knows.

Stay tuned (can you tune in to a blog?) for updates about today's tempête in France.
Posted by Ken Broadhurst at 07:24