Our friends who live in the wine village called Mesland, on the other side of the Loire river near Chaumont-sur-Loire (site of a famous château), have invited us to spend New Year's Eve with them. The New Year's Eve feast is called Le Réveillon in French. That means a very late dinner, and very good holiday food.

The menu for this réveillon includes oysters, foie gras, and canard à l'orange — that's duck with orange sauce. Not to mention champagne, cheeses, and desserts. There will be about 10 of us there for the party. 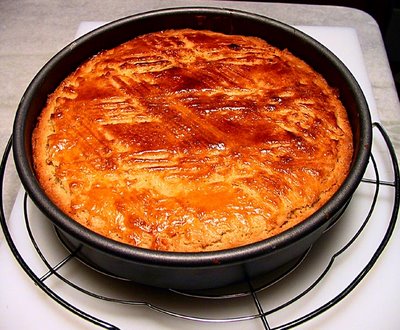 The gâteau basque as it came out of the oven
We were asked to bring desserts and cheese. I made a cake called a gâteau basque and Walt made a tarte aux pommes. The gâteau basque is a kind of cookie dough cake with a filling. I filled this one with plum jam that I made last fall using plums that I had picked in a friend's orchard. 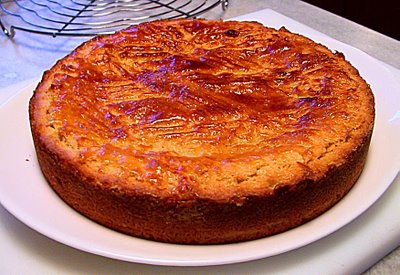 Here's a picture of Walt's tarte aux pommes — apple tart. He makes his own pie crust with butter, what is called a pâte brisée. As a base for the sliced apples (nicely arranged, no?) he sprinkled in some ground hazelnuts and some cinnamon and nutmeg, and then he spread his own home-made apple sauce over that. Then the apples went on top. 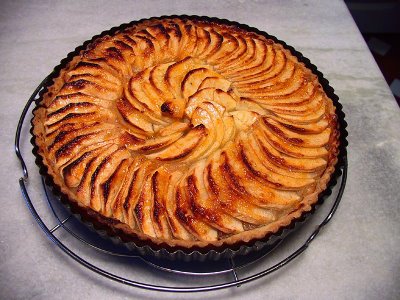 A classic French apple tart
I don't think I'll be taking any pictures this evening, but you never know. More tomorrow...

* * * * *
Tomorrow is January 1, 2007. Being a U.S. Southerner, it is my tradition to eat black-eyed peas on New Year's Day. Eating black-eyes brings you good luck all the year long, or so we say. Luckily, our Intermarché supermarket sells black-eyed peas. They are imported from Portugal (but probably grown in the U.S.) and are kept in the exotic foods section along with the soy sauce, taco shells, and Lancer's rosé wine. 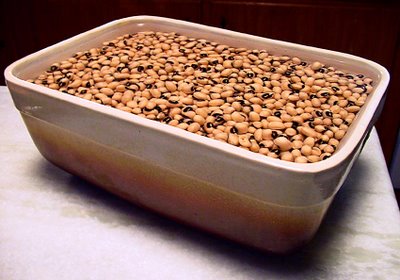 I'm soaking my black-eyed peas overnight in the new dish I bought this
week. I splurged and paid two euros for this nice earthenware terrine.
To accompany the peas, I'm making a confit of duck and pork. I bought four duck leg sections (thigh and drumstick) and a piece of fresh porkbelly (lard frais). This afternoon, I cooked all five pieces of meat in duck fat in a pot on the stove, at a slow simmer. The fat completely covers the meat, which will be tender and juicy, not fried. Tomorrow, I put the pot back on the heat to melt the fat so that I can remove the pieces of meat and serve them. 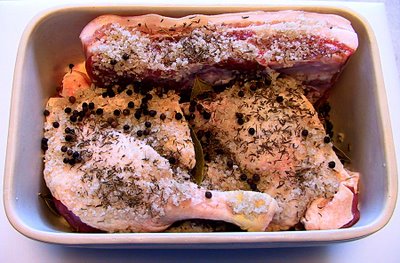 Duck and pork pieces left to macerate in salt, pepper, and herbs
I sprinkled coarse salt, black peppercorns, dried thyme, and a few bay leaves over the meats and let them macerate for 24 hours before cooking. Then today I rinsed off the salt and spices before I immersed the duck and pork in simmering duck fat to cook for 90 minutes. See this earlier post about making duck confit if you're interested: Making confit out of a duck.

We also have a couple of saucisses de Toulouse to eat with the black-eyed peas, duck, and pork. As you can imagine, this dish will make several meals for us, and it can easily be frozen and eaten later in the winter too. What we'll end up with will be a kind of cassoulet.

I saw an article in the New York Times today about people who moved to a certain neighborhood in Queens because they liked the food there. Walt and I moved to France because we like the food here. Among other things...