Today is supposed to be windy, rainy, and stormy. Again. Walt says the weather sites show rain moving this way, and we are already feeling strong gusts. It's chilly, but not cold, considering it's December 7. The temperature this morning is about 8.5ºC/47ºF. 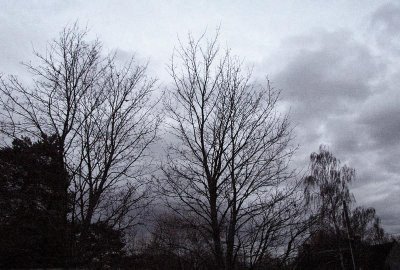 Gray skies late on a December afternoon at La Renaudière
On the news earlier this week I heard that the people who keep weather records have changed their assessment of this fall season in northern France. At first, they were saying it was the mildest since 1950. Now they are saying it's the mildest in recorded weather history. That goes back into the 19th century. 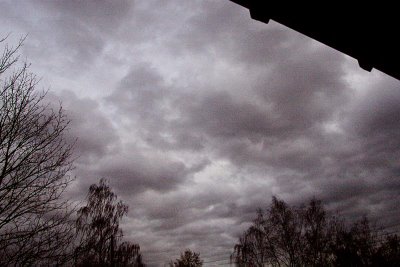 December storm clouds gathering outside the kitchen window
But look at the pictures below, which I took this morning. At about 8:00 a.m. we were treated to another one of our area's spectacular sunrise displays. Here's a picture taken from the same spot as the one above, mais quelle différence ! I took this picture with my little Canon PowerShot S70 camera, zoomed all the way out and in portrait orientation. Then I cropped it in Adobe Photoshop Elements. 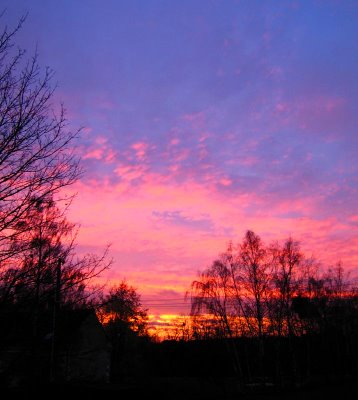 Sunset, wide angle, 07 December 2006 at La Renaudière
Looking at the sunrise, I decided to go and grab my long-lens camera, a Canon PowerShot Pro90IS, for some close-up shots. I've had the Pro90 camera for about five years now. It's big and heavy, which limits its usefulness, but it has a 10x zoom lens that does a great job. In film-camera terms, it's equivalent to a 37 - 370 mm zoom range. 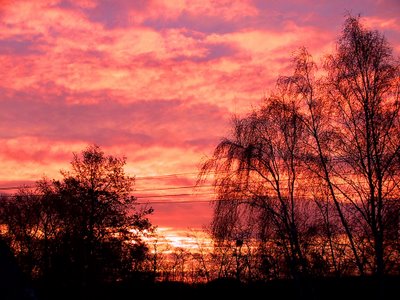 Zoomed in about half way on the center of the sunrise shown above
And here finally is a shot at full zoom of the center of the sunrise. This isn't a crop of the above picture, but a different image. I think it's incredible. Just when you think you've reconciled yourself to enduring a few months of chilly gray weather, nature treats you to this kind of spectacle. 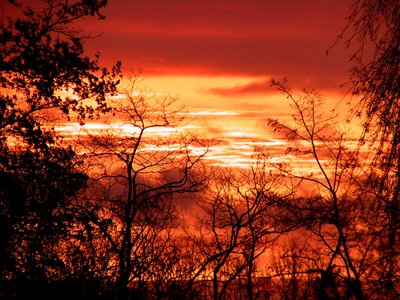 Full zoom on the sunrise at La Renaudière, 07 December 2006
As always, if you click on the pictures in this blog, you'll see a much larger view of the image.

Now, back to the gray, windy rain we're supposed to have all day.
Posted by Ken Broadhurst at 09:43