I realized yesterday that December 10 is the anniversary of the day we found our house in France, the one we live in now. It's been four years already, because the first time we saw the place was in December 2002. We moved here in June 2003. 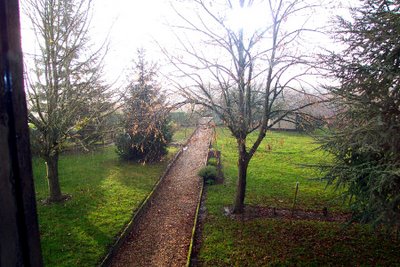 The back garden at La Renaudière, 10 December 2003, when we first saw the house
We had come over to France from California in December 2002 "just to look around" and verify that the real estate listings we had been seeing on the Internet reflected some kind of reality on the ground. We didn't know that we would end up signing a contract to buy a house, and that we would be living in France just six months later. It all happened very fast.

The house was a real mess back then, but we could see its potential. It had been closed up and unlived-in for several years. Wallpaper needed to be stripped off, and paint needed to be applied everywhere. But we figured we would have time and the energy to do all that work, one way or another. The yard seemed enormous by San Francisco standards, the surroundings were perfect, and the house was structurally solid. 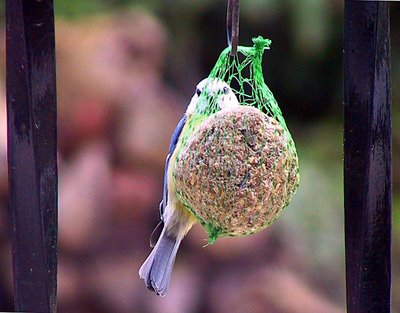 Birds called tits (in French, mésanges) enjoy feeding on
the boules de graisse (suet) we put out for them in winter
Four years later, we have no regrets. We've made a lot of improvements in the house — paint, tile, windows, electrics, a new shower and other plumbing, a wood-burning stove, and so on. We are even connected to the sewer mains now!

The neighbors have been welcoming and respectful of our privacy. We have a really nice vegetable garden in the summer and fall. The bread lady delivers a fresh baguette nearly every morning. The vineyards out back are our playground — or they were, before our dog Collette passed away last spring. We plan to get a new puppy this spring. 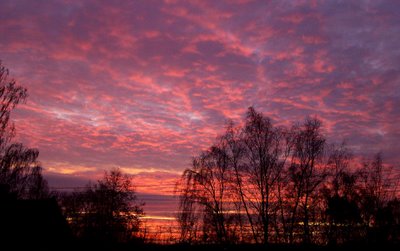 Another beautiful sunrise at la Renaudière (11 December 2006)
Anyway, in another 10 days the hours of daylight will begin increasing again. Right now the sun comes up at 8:30 a.m. and goes down at 5:00 p.m. But some mornings the sunrise is beautiful, and we haven't had any really cold weather yet. Friends from California are coming for Christmas. 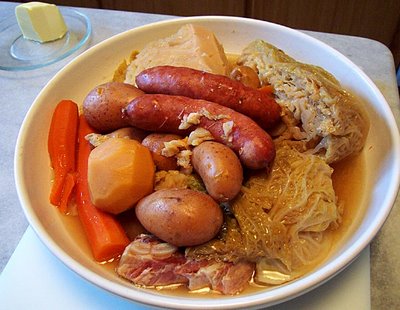 If you think you don't like cabbage, you should try a French potée
And then there's the food. Yesterday I made what is called a potée for our Sunday dinner. That's cabbage, carrots, turnips, and potatoes cooked in broth with smoked sausages and cuts of pork. Sort of a French boiled dinner. Great comfort food on a winter day. 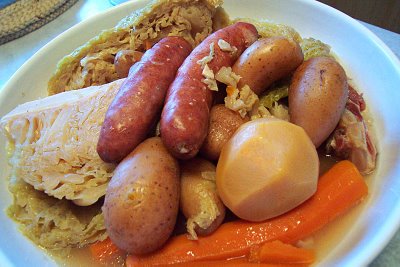 Locally grown cabbage, carrots, and turnips. Good franceline potatoes.
Sausages made by Doudouille in Blois and bought at the farmers' market
in Saint-Aignan. All cooked in my own home-made vegetable broth.

Yesterday for the first time I saw a red-breasted nut-hatch feeding on one of our suet balls. That's a sittelle torchepot in French. Watching the birds, the sunrises and sunsets, and the passing weather phenomena isn't such a bad way to spend these quiet December days.
Posted by Ken Broadhurst at 09:05