Ghosts of advertising past (1)

A few times a year we get a magazine called Loir & Cher Info in the mail. It's published by our local authorities; we live in the Loir-et-Cher département. The magazine contains articles about events and developments in our area, as well as some entertaining feature articles.

The December issue includes an article called "Les Murs-Réclames" — it's about old advertising panels that are painted onto the walls of buildings along the local roads. That reminded me that I've taken many pictures of such advertising. An American friend calls them ghost ads. A lot of them date back to the first half of the last century. 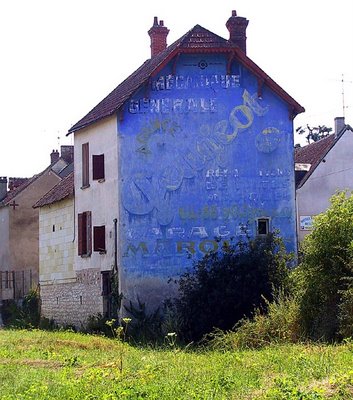 Here's an example that is located on the road leading into Saint-Aignan from the north. The Peugeot dealership/garage advertised here doesn't exist today, to my knowledge. The current Peugeot dealer in Saint-Aignan is the Garage Danger, which is owned and operated by Thierry Danger. He took it over when his father retired, I understand, so the Garage Danger has been in business for a few decades. (I bought my car there in 2003.)

Here's a close-up of the old ad. 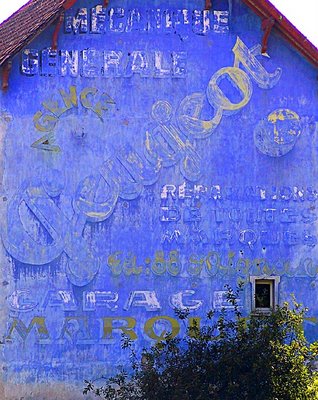 Over the next few days, I'm going to publish pictures of some other ghost ads I've spotted as I've explored our area.
Posted by Ken Broadhurst at 09:00