One of the places I've visited in 2006 that really sticks in my mind is the little town of Palluau-sur-Indre, about 25 miles, or 40 km, south of Saint-Aignan. I don't know what it is about the place that makes me keep thinking about it. 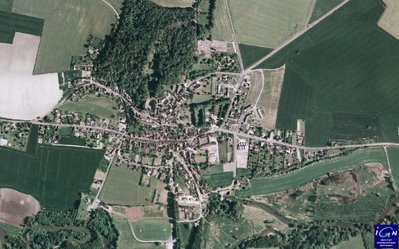 A satellite photo of the village of Palluau-sur-Indre

Maybe it's that I had never heard of it before last June 15, when we went there on an outing. We were just exploring. Here's what I blogged about Palluau then. That day, I discovered that it was the home town of a man named Frontenac who played a key role in the establishment of the city and province of Québec, in Canada. The big château/hotel in Quebec City is named for him. I stayed there many years ago, when I was in Quebec City for a conference.

Yesterday I found a web site in French that gives a nice historical overview of Palluau-sur-Indre. The author says that not much is known about the area before the year 1000. But according to legend, the Romans built fortifications there in the first century of our era. It was on the Roman road that led from Orléans to the city of Poitiers, to the southwest. 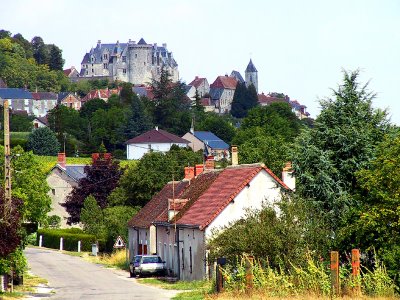 The château at Palluau dominates the village and the river valley.

One early period that is documented is the arrival of Vikings in the year 902. They pillaged Palluau and the nearby abbey at Saint-Genou, founded in 828. The area around Palluau was under Viking domination for about 35 years, and then the Vikings were pushed out of the Loire region. 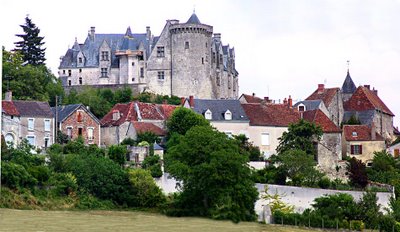 The first mention in writing of the château at Palluau dates back to 1073, evidently. Palluau was at the southeastern edge of the territory controlled at the time by the Count of Anjou, a certain Geoffroy Plantagenêt. A few decades later, Geoffroy's descendent Henri II would increase his holdings considerably by becoming king of England as well as count of Anjou and duke of Normandy. 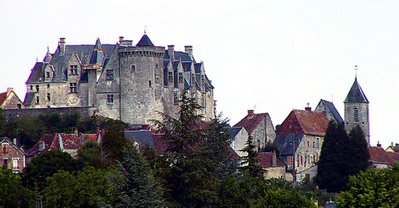 So the count of Anjou was a powerful figure and Palluau was a strategic site that was well fortified. Richard the Lionhearted inherited the English throne and the county of Anjou from his father. The Plantagênet's were locked in a struggle against the king of France, Philip Augustus, based of course in Paris.

Palluau and its château changed hands several times, but Philippe Auguste was eventually victorious, after numerous battles and sieges. Palluau became part of the French kingdom by the year 1200 or so. 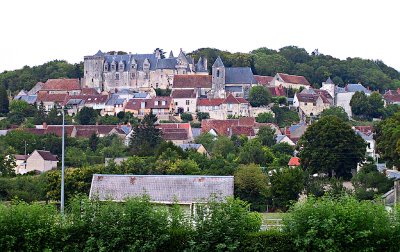 A view from the south looking across the Indre river valley

A couple of centuries later, during the Hundred Years War, which was fought between the English and the French on what is now French territory, the English took control of Palluau again for about five years. They tore down the château before they were forced by the French king's forces to retreat farther west at the end of the 1300s.

The château de Palluau in its present form was built, then, in the 1400s. The Palluau "skyline" has changed very little since then. In the 1500s, the French Renaissance, the owners of Palluau modernized the château and made it into a pleasant place to live. They were helped by workmen brought to the region from Brittany by the French queen, Anne de Bretagne, who spent a lot of her time in the château at Loches, just a few dozen miles down the Indre river from Palluau.

In the 1700s, the château at Palluau became the property of who else but the Duke of Saint-Aignan, a man named Paul de Beauvillier. He was a powerful figure in the court of Louis XIV, and he spent most of his time in Paris and at Versailles. When the French Revolution exploded in the late 1700s, Palluau was used as a prison for a time.

Since 1990, the château at Palluau has been owned by a real estate corporation. The property is managed by an Englishman...